Time for America to Listen to Moon Chung-In 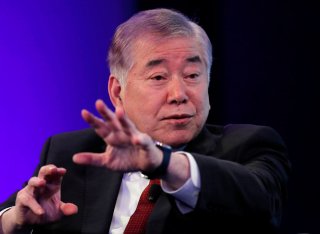 Moon Chung-in, a professor emeritus at Yonsei University and one of South Korean President Moon Jae-in’s closest foreign policy advisers, has spent years trying to educate U.S. officials about the imperative of striking a peace agreement on the Korean Peninsula. But if he often sounds like a broken record, it’s because too few people in Washington, D.C. are seriously listening to what this distinguished statesman has to say.

Last year, Moon sat down with the National Interest’s own John Dale Grover to give his take about what needs to be done if Washington, Pyongyang, and Seoul hope to break through the panoply of mistrust and proceed towards an acceptable, history-changing deal.

The interview turned into a sort of therapy session for Moon, who hasn’t been shy in expressing his views about why Washington’s pre-cooked perception of North Korea as “the impossible state” is flat-out incorrect and how the U.S. approach to negotiations with the Kim dynasty is in effect focused on the wrong priorities. “Korean watchers in the United States need to have a more realistic and flexible attitude on North Korea,” Moon said at the time. “Pyongyang is not likely to accommodate American demand of ‘dismantle first, reward later.’ If the choice is framed as ‘all or nothing,’ Washington will continue to get nothing.”

Policymakers in Washington have a bad habit of rolling their eyes whenever somebody is bold enough to suggest that the United States can’t simply will its way to a perfect deal or coerce the other party into accepting their demands. Moon’s words, however, are indelibly reasonable, well thought out, and indeed common-sense for any individual who studies international relations or is lucky enough to be a practitioner in the field. No nation, particularly a weak state surrounded by wealthier and militarily powerful neighbors in a combustible, challenging region, will respond positively to a strategy of submission. For whatever reason—the hubris embedded in U.S. foreign policy; a clownish knowledge of how the Kim dynasty operates; overconfidence in U.S. power, take your pick—the Boltonian ideology of “give me everything now in exchange for something later” is still not fully vanquished from the Trump administration’s strategy towards the North.

Moon Chung-in has never been enthralled with Washington’s North Korea policy. Whereas the Trump administration and previous administrations before it have put Pyongyang’s total and complete denuclearization as the first priority, Moon and his boss, President Moon Jae-in, believe in their bones that the only way you will get anywhere with the North Koreans is if you strengthen inter-Koran ties first. As Moon himself wrote in the Hankyoreh newspaper on July 13, “John Bolton and other hardliners in the U.S. argue that Pyongyang should be forced to choose between its nuclear program and economic development. But until North Korea’s security fears are resolved, it will never agree to denuclearize now and be rewarded later.” Bringing the North and South Korean economies closer together and, over time, breaking down the tall walls of distrust that have divided the Korean Peninsula is the only way the situation is ever going to resolve itself.

Of course, Moon’s insights don’t have much practical effect if Washington chooses to cover both of its ears. There appears to be some movement in the Trump administration towards a more incremental, step-by-step diplomatic approach with Pyongyang (CFNTI’s Harry Kazainis reported in the American Conservative that White House and State Department officials are beginning to get more creative with the concessions they put on the table). However, the success of U.S.-North Korea diplomacy will ultimately hinge on whether U.S. policymakers are willing to throw the old rulebook in the garbage. The answer to that critical question is still outstanding—although President Trump is the consummate contrarian, his advisers have proven to be cautious and conventional.

Much has been written about the turbulence Washington-Seoul relations have absorbed during the Trump era. Most of the conversation centers on the never-ending negotiation over cost-sharing, where the White House continues to demand the Moon government reach deeper into their wallets and contribute more for the upkeep and maintenance of the 28,000-strong U.S. troop presence in South Korea. But another piece of the puzzle concerns Washington’s North Korea policy, which severely handicaps what Seoul can do independently and essentially relegates the South Koreans to a supporting role in their own future. As Moon Chung-in said during a talk this January at the Center for the National Interest, President Moon Jae-in “is having a real hard time in pushing for the idea of peacebuilding through the peace economy.” In essence, his attempts to reconnect the North and the South through economic and infrastructure projects are held captive to U.S. and U.N. Security Council sanctions—none of which Washington intends to remove as long as Kim doesn’t make substantial nuclear concessions. The result has been a long stalemate, a disappointed South Korean government, a frustrated Kim Jong-un, and an inter-Korean relationship that is worse off today than it was a year prior.

Perhaps it is time for Washington to finally take some advice from Moon Chung-in instead of arrogantly dismissing him?