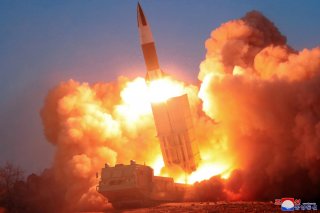 South Korean Assemblyman Thae Yong-ho was recently asked whether the North feared the Republic of Korea might develop nuclear weapons. Thae, a former top North Korean diplomat who defected in 2016, said no. Which means Pyongyang believes it can develop nuclear weapons without fear of retaliation. The ROK government should change that.

The Democratic People’s Republic of Korea has good reason to seek nuclear weapons. It is alone militarily, with at best a difficult relationship with its only nominal ally, the People’s Republic of China. Like other poor, small states, it lacks the conventional military strength to withstand an American attack.

Beijing’s influence over North Korean behavior remains quite limited. Contra claims that the North is but a PRC puppet, Pyongyang always has acted independently, recognizing that China cannot easily swallow or coerce its troublesome neighbor.

Indeed, from its formation North Korea has caused Beijing nothing but trouble. Even during the best of times Pyongyang played the PRC against the Soviet Union to maximize the North’s leverage. After America’s intervention in the Korean War, China had to rescue the DPRK as victorious U.S. and allied forces headed towards the Yalu. North Korea’s resentful Kim Il-sung lost control of the war and gave the PRC few thanks for its sacrifices on his nation’s behalf. When Kim consolidated power in the 1950s he purged the pro-Beijing faction.

China’s Mao Zedong criticized Kim’s decision to turn his country into a quasi-monarchy. More recently, the North was outraged by the PRC’s enforcement, however lukewarm, of sanctions. When I visited the DPRK three years ago officials emphasized their desire to be independent of any other country, making clear that China was included in that judgment. Beijing reciprocated the feeling: from 2011 to 2018 the PRC refused to invite Kim to visit, in contrast to his father and grandfather. Only the prospect of the first Trump-Kim summit moved President Xi Jinping to meet with Kim.

The challenge for U.S. policy is two-fold. Although China does not want the North to develop nuclear weapons, the former also is quite concerned about stability. Nor is Beijing in the mood to help Washington.

A nuclear DPRK would be even more independent from Chinese control and could cause even greater harm if it went rogue. While Beijing benefits to some degree from the challenge posed by the North to the U.S. and its allies, excessive belligerence could result in a full-scale war, triggered either by a North Korean attempt to complete reunification 70 years on, or an American to forcibly disarm or oust the Kim dynasty.

At the same time, the stability desired by the PRC is threatened by the tension and conflict stoked by Washington’s disarmament campaign. That is, America’s principal tool to achieve denuclearization, sanctions, also produces instability. Economic stringency could lead either to the North’s collapse or violent action by Pyongyang in an attempt to forestall collapse.

Thus, Beijing hopes to find the Goldilocks solution, the pressure package sufficient to cause the DPRK to act more responsibility without triggering an implosion or aggressive action. This effort is further complicated because China places much of the blame on Washington for pushing the North to get nukes. The critique has some justification. After all, the U.S.—which has regularly threatened to attack North Korea and routinely bombed, invaded, and occupied other American adversaries, such as Iraq and Libya—has given Pyongyang good cause to seek nuclear weapons.

Moreover, China’s relationship with America is both more important than that with the North and much worse than ties even a year ago. The problem is not just overall tensions. Beijing does not want to enhance Washington’s ability to create a containment system directed at the PRC. If Chinese-supported sanctions led to the North’s collapse, the result likely would be reunification dominated by the South, placing an American ally hosting American troops on China’s border. Beijing went to war in 1950 to prevent just such a situation. Which creates yet another reason for the PRC not to help Washington. Despite broad agreement that the North should not be a nuclear state, the Xi government likely sees little benefit from cooperating with the U.S. on the issue, at least now amid talk of a new Cold War.

How to change the current unfavorable balance of interests? Convince both the DPRK and China that their actions could result in a South Korean bomb.

That actually shouldn’t be difficult. Polls already indicate that a majority of South Koreans favor a South Korean arsenal. There are advocates in think tanks, the media, and politics. There are obvious reasons why doing so would be a good idea. Especially amid deteriorating relations between the U.S. and PRC. Seoul risks ending up in the historic role as a shrimp among whales, being pressed to choose between the latter. In such a case, an independent nuclear deterrent might look like an unfortunate necessity.

However, set aside the question whether “friendly proliferation” would be the best outcome. The mere possibility of a South Korea bomb could affect the North’s and China’s actions. Pyongyang would realize that it might create a nuclear Frankenstein in the South, beyond America’s control. The PRC would realize that failing to rein in the DPRK could spark secondary proliferation that might not, indeed, probably would not, stop in Seoul. The prospect of Japan and Taiwan becoming nuclear powers would be particularly disturbing for Beijing; Australia and others conceivably could follow as well.

In which case the U.S. might have better success in pushing denuclearization, especially if its proposals were accompanied by appropriate economic and diplomatic concessions. Pyongyang’s reasons for preserving and even expanding its nuclear arsenal would remain strong, but some new negatives would have been introduced to encourage nuclear disarmament. And there is no obviously better path leading to this result, which most everyone other than the North desperately desires.

Washington and Seoul should leaven their diplomatic efforts with some showmanship derived from the game of poker. Even if neither wants South Korea to develop nuclear weapons, a little strategic bluffing could prove useful. The allies have yet to make a compelling case for Pyongyang to abandon what remains the ultimate weapon.