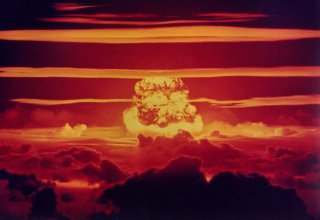 Chinese President Xi Jinping is on the warpath. He has abrogated the 1984 Sino-British Joint Declaration which guaranteed Hong Kong’s special status more than a quarter-century early. He has precipitated the worst military crisis with India since the 1962 Sino-India War. His repression and incarceration of the Uighur minority is on a scale far greater than what happened during the Balkan wars at the end of the 20th century. China’s artificial island-building in the South China Sea and its farcical and ahistorical claims to the “Nine-Dash Line” represent a land grab against the Philippines and the theft of maritime resources against other regional states.

Now, Chinese officials are again signaling they may attack Taiwan. On Friday, Li Zuocheng, chief of the Joint Staff Department and member of the Central Military Commission, promised to “resolutely smash any separatist plots or actions.” He added, “We do not promise to abandon the use of force, and reserve the option to take all necessary measures, to stabilize and control the situation in the Taiwan Strait.” What Li sees as “separatist plots or actions,” the Taiwanese might call popular sovereignty and the exercise of democracy. After all, Taiwanese—both those indigenous to the island and those who are more recent immigrants—have a very different narrative, one rooted more in history. They realize that while Chinese officials have long claimed the island nation as an indivisible part of China, historically and with the exception of just a few decades over the course of centuries, Taiwan has been distinct and its own entity. Any visitor to Taiwan can observe this the second they leave the airport.

Authorities in Taiwan cannot afford to take Chinese threats lightly. They recognize that the fact that Western democracies and regional Asian states have offered little more than rhetoric in response to Chinese aggression only emboldens Beijing and makes it more likely the fact that Chinese ‘salami-slicing’ will continue. And while the U.S. Navy will continue to traverse the South China Sea to demonstrate its commitment to maintain freedom of passage in international waters, the Pentagon is simply not prepared to risk war with China to counter the occupation of the Scarborough Shoal or Mischief Reef, let alone the Penghu islands or the Taiwanese mainland.

With communist authorities in China openly and gleefully shredding the post-World War II liberal order, it may be time for the United States and Taiwan to show Beijing the dangers of doing so by allowing Taiwan to become a nuclear weapons power.

The Clinton administration popularized the term “rogue regime” as a state that promoted terrorism or acted aggressively toward its neighbors but for political scientists, the origin of the concept was different. In 1977, for example, political scientist Richard K. Betts spoke wrote about nuclear ambitions among paranoid, pygmy, and pariah states. He defined both Israel and Taiwan as pariah states, not as a moral judgment, but rather because neighboring and regional states posed existential challenges to their national status. Two years later, the New York Times wrote about Israel, Taiwan, and South Africa as “nuclear outcasts” because they might require nuclear weapons to deter existential challenges.

While Israel has never signed the nuclear Non-Proliferation Treaty (NPT) and so is not governed by its constraints, Taiwan’s nuclear program was in violation of its treaty obligations. In 1968, Taiwan—then recognized at the United Nations—as the legitimate government of China has signed the NPT and was a member of the International Atomic Energy Agency. Officially, when Washington and the United Nations shifted recognition of China from Taipei to Beijing, the United States and Taiwan agreed that Taiwan would continue to abide by the NPT. As Taiwan nevertheless quietly pursued a nuclear capability, the Clinton administration acted covertly to sabotage Taiwanese ambitions.

In hindsight, that was a mistake. If the Trump administration wishes to push back on Xi’s aggression, it is time to reconsider the interpretation of Taiwan’s NPT commitments, both in Washington and Taipei. After all, if the international community will not uphold its obligations to Taiwan, then Taiwan should not bend over backward to preserve an order in which the People’s Republic of China is deliberately ending.

Should Taiwan start from scratch and indigenously build its program, it might precipitate further communist Chinese aggression. But, if Taiwan was gifted medium-range nuclear weapons which were placed under its control, it would both acquire a sufficient deterrent in order to maintain stability if not peace across the Taiwan Strait and absolve the United States of the need to deploy multiple carrier groups to the region should communist China attack the only remaining free and democratic Chinese republic.

Now is the time for hard decisions in Washington. If China digests Taiwan as it has Hong Kong, it is unlikely it will simply be satiated. As China faces its own economic turmoil, Xi can put forward baseless claims as fact and encroach further in Southeast Asia, the East China Sea, and the Pacific. And while Taiwan’s membership in the nuclear weapons club will be a blow to the spirit of the NPT, no country should be expected to sacrifice the freedom of 24 million people to preserve order and a system in which the international community lets Beijing deconstruct with ease.