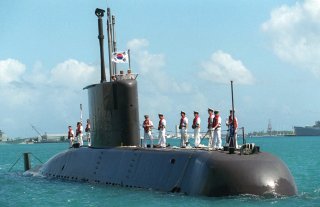 The South Korean Ministry of National Defense announced its “2021-25 Medium-term Defense Program” on August 10, delineating plans to upgrade the military and prepare for the post-wartime operational control (OPCON) transfer era. Many initiatives were started to improve the Korean military with cutting-edge technology in response to intensifying North Korean nuclear threats, but the most conspicuous and controversial plan was the potential acquisition of nuclear-powered submarines (SSNs).

Although the ministry did not elaborate on the type of propulsion for the four-thousand-ton next-generation submarines, statements from high officials strongly indicate that the upcoming version will move from diesel-electric and air-independent propulsion to nuclear propulsion. For instance, president Moon Jae-in clearly stated during his presidential campaign in 2017 that South Korea needs SSNs “in this era.” In line with the president’s vows, the deputy national security advisor Kim Hyun-jong told the press that the next submarines will be nuclear-powered. This announcement was made after pronouncing the revision of the U.S.-ROK missile guidelines. Suppose South Korea makes its path in pursuit of SSNs official. In that case, it will create a new security dilemma surrounding the Korean Peninsula, while adding a small deterrent value against the North Korean threats.

People who argue for the creation of nuclear-powered submarines emphasize the imbalance in its quantity. South Korea currently has eighteen operating submarines while the North has approximately seventy. Calls for SSNs in South Korea were reinforced after North Korea test-fired submarine-launched ballistic missiles (SLBMs) for the first time in 2015, and when the North Korean state media released a report of Kim Jong-un inspecting a newly built submarine last year. Although the report did not provide any details of the submarine, observers analyzed that the development was intended to enhance North Korea’s nuclear SLBM launch technology. North Korean underwater capabilities are advancing at a rapid speed. So far, SLBM tests were already conducted multiple times. As the 2010 Cheonan incident demonstrated, North Korea has the capability and the ability to inflict harm. Therefore, it is true that an appropriate counter-strategy is needed to cope with North Korea’s advancing sea-based threats. However, this article argues that introducing nuclear-powered submarines cannot fully solve the problem.

First, the West Sea is too shallow for a 4,000-ton submarine to operate safely. In contrast to the East Sea that has an average depth of 1,500 meters, the West Sea is only 50 meters deep. Moreover, the South Korean Navy had already acknowledged back in 2009 that the West sea is unsuitable for submarine operations. This was because of the enormous amounts of underwater waste that can entangle the propellers. A primary purpose of adopting nuclear-powered submarines is to chase North Korean submarines for longer periods without recharging the diesel-electric batteries. However, the disadvantageous underwater environment prevents large-scale submarines from efficiently tracking down the North Korean midget submarines that will likely operate in the coastal waters. Note that the North Korean submarine that attacked the Cheonan in 2010 was a 130-ton midget submarine near the southwestern coast of Baengnyeong-do. This is partly why the North Korean modern submarines are built on the eastern coast of the peninsula at Sinpo.

Second, the nuclear-powered submarines are louder than conventional submarines. The ability to conduct clandestine operations is what makes a submarine powerful and threatening. The detection rate of a submarine was less than 25 percent in a simulated war game conducted by the South Korean Navy. The key to escape detection is minimizing the noise that is mainly released from propulsion engines while maneuvering. However, the small nuclear reactors are usually louder than diesel-electric type propulsion noise, which increases the chances of being detected by adversarial surveillance.

Finally, chasing all North Korean submarines is nearly impossible even though a nuclear-powered submarine has a more extended duration capacity. For example, South Korea turned on the anti-North Korean speakers along the demilitarized zone after North Korea installed landmines and hurt two South Korean soldiers in 2015. The North responded by sallying about fifty submarines at the same time. Usually, the South Korean intelligence agencies utilize satellite imagery to keep an eye on North Korean submarine bases. They then raise the alert level when submarines depart from the port. Nevertheless, the simultaneous disappearance of many submarines created turmoil, and the psychological effects were significant. Thus, the quantity matters. However, on top of the aforementioned limitations regarding maritime environmental conditions, adding a few expensive nuclear-powered submarines will still be insufficient to overcome the gap.

In addition to the tactical limitations, introducing nuclear submarines will create a security dilemma in the region and will deteriorate the Korean Peninsula’s security environment. Currently, only six countries (P5 + India) operate nuclear-powered submarines. The five UN Security Council members are internationally acknowledged nuclear powers, while India is not a member of the nonproliferation treaty (NPT). Conversely, South Korea is a member of the NPT. To build a nuclear submarine, South Korea will have to withdraw from one of the few universally agreed-upon international norms of nonproliferation. Other than the expected opposition from the international society, South Korea has to overcome the restrictions regulated by the “U.S.-ROK Nuclear Cooperation Agreement.” Such agreement bans the use of enriched uranium for military purposes. Although the revised deal in 2015 opened the way for South Korea’s enrichment of uranium at a 20 percent level, the military use of enriched uranium is still strictly prohibited. Nuclear nonproliferation is considered a vital national interest for the United States, and therefore, South Korea’s development of a nuclear submarine is likely to be opposed by its powerful patron. Moreover, South Korea had attempted to build a nuclear submarine in 2003. However, the same was thwarted after the program was publicized and brought to the attention of both the International Atomic Energy Agency and the United States. Furthermore, China is another actor in the region that will react sensitively to South Korea’s nuclear submarine capabilities. In 2017, China had enforced retaliatory economic measures against South Korean businesses and blocked tourists from visiting South Korea. Such a move was made after President Park Geun-hye decided to accept the U.S. Terminal High Altitude Area Defense (THAAD) system in 2016. As a result, South Korea had no choice but to implement the so-called “3-no” policy. Such policy involved no additional THAAD deployment, no establishment of a U.S.-ROK-Japan trilateral military alliance, and no participation in the U.S.-led missile defense network. At a time when the U.S.-China competition is becoming more intense, a move toward nuclear-powered submarines will spark security concerns and put South Korea in a more disadvantageous position.

Previously in the National Interest, Zachary Keck and Henry Sokolski examined the South Korean nuclear-powered submarines’ cost-efficiency, calling President Moon’s interest in the high-tech weaponry as a “blunder.” Instead, the authors suggested investing the $7–9 billion for building a single nuclear submarine to cost-efficient alternative assets such as the P-8A Poseidon Maritime Surveillance Aircraft and other missile defense systems. Indeed, according to a study by Yu and French, the cost of a single nuclear-powered submarine is equivalent to building “three new advanced Jangbogo III-class SSKs [attack submarines] or as many as eight smaller Son Won-il-class SSKs.” The costs outweigh the benefits of developing a nuclear-powered submarine because of tactical reasons and the anticipated opposition from neighboring countries. Thus, it will be wiser for South Korea to invest in surveillance aircraft that are better at detecting enemy submarines. It will also be better to invest in unmanned underwater vehicles which show promising expectation effectiveness.

Of course, the Moon administration is implicitly preparing for the post-wartime OPCON transfer era by developing strategic weaponry to deter North Korea. President Moon pledged to complete the transfer of wartime OPCON by 2022. He is likewise pushing to meet the three-stage transfer conditions based on the assessments of South Korea’s autonomous operational military capability. However, the question is, as Michael Peck stated, “if North Korea isn’t deterred by the enormous U.S.-South Korean military machine, nor by America’s overwhelming nuclear arsenal, then why would it be deterred by a South Korean nuclear-powered sub?” A simple answer is that the U.S. “nuclear umbrella” deters North Korea. A nuclear threat can only be deterred by having a nuclear second-strike capability to survive and retaliate after the adversary’s first attack. Suppose the Moon administration expects to deter North Korea with nuclear-powered submarines without survivable nuclear weapons. In that case, that certainly is a strategic “blunder,” as Keck and Sokolski mentioned.

Sanghoon Kim is a Research Fellow with the Political and Security Affairs team at the National Bureau of Asian Research (NBR). He is also a graduate student at Korea University, majoring in international security, and had served in the Republic of Korea Navy as an officer for three years.