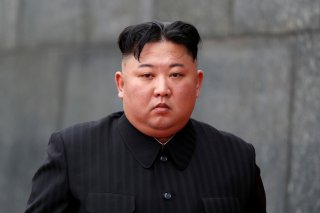 The Trump administration’s diplomatic opening to North Korea in 2018 and 2019 was one of the few major foreign policy disagreements that emerged as an issue in the 2020 presidential election. In fact, the two candidates argued about it during the second general election presidential debate, last October.

In the only major exchange of the night that touched on foreign policy, then-candidate Joseph Biden denounced North Korean leader Kim Jong-un as a “thug.”

“North Korea is a problem,” Biden said in the debate. “We’re going to make sure we can control them and make sure they cannot hurt us. And so if you want [to] do something about it steep up and help. If not, it’s going to continue.”

“What has [Trump] done? He legitimized North Korea. He’s talked about his good buddy who’s a thug. A thug. And he talks about how we're better off. And they have much more capable missiles, able to reach U.S. territory much more easily than [they] ever did before.”

Five months later, Biden is president, and getting ready for a big diplomatic push in Asia. And one new report, citing a Biden official says his administration is pushing for renewed talks with North Korea- but that there’s been no reception to those overtures so far.

The Associated Press reported that, ahead of this week’s visit to Asia by the secretaries of state and defense, officials have “tried to reach out to North Korea through multiple channels since last month,” but that there’s been no response from Pyongyang so far.

“Our goal is to reduce the risk of escalation. But to date, we have not received any response,” she said this week, per the Wall Street Journal. “Diplomacy continues to remain our first priority.”

Another report, by Reuters, was similar and added that the diplomatic efforts have been underway since mid-February. The efforts had been pursued  “through several channels starting in mid-February, including in New York,” the source told Reuters.

“The disclosure of the so-far unsuccessful U.S. outreach, which has not been previously reported, raises questions about how Biden will address mounting tensions with Pyongyang over its nuclear weapons and ballistic missile programs,” Reuters said in its analysis.

“We take this opportunity to warn the new U.S. administration trying hard to give off powder smell in our land,” she said. “If it wants to sleep in peace for coming four years, it had better refrain from causing a stink at its first step.”

The Biden administration has been undertaking a formal policy review in regards to North Korea, one that is not yet complete but expected to wrap up in the coming weeks.

North Korea experts weighed in on the development.

“The Biden administration, unlike its predecessor, has prioritized strengthening its alliances with South Korea and Japan to deal with the North Korean nuclear issue rather than dealing with North Korea directly,” Charles  Armstrong, a retired professor of Korean Studies in the Department of History at Columbia University, told the National Interest this week.

“And after the failure to achieve a substantive breakthrough with Trump despite the Trump-Kim summit meetings, the North Koreans are particularly wary of the new administration. I don't foresee a diplomatic breakthrough any time soon.”

“The Biden administration reaching out to North Korea early on is certainly a plausible strategy,” Daniel DePetris, a fellow at Defense Priorities, told the National Interest.

“There is nothing wrong with a new administration exploring the prospects for diplomacy with an adversary, particularly when non-diplomatic solutions to the North Korea nuclear problem range from ineffective to catastrophic. But the North Koreans don’t have an incentive to respond to the overtures at this time. The Biden administration has yet to finalize its North Korea policy review. Until it does, I suspect Pyongyang will choose to wait until a clearer picture emerges of the U.S. position.”

DePetris had said on Twitter last week that every administration in recent memory has conducted such a policy review.

“Every U.S. admin alleges the review will consider new & exciting ideas to move diplomacy forward. And without fail, every U.S. admin eventually settles on the same policy,” he said.

Secretary of State Antony Blinken and Defense Secretary Lloyd Austin arrived in Asia Monday for a four-day visit, which marks the first cabinet-level trip abroad by the Biden administration. Blinken and Austin are set to visit Japan and South Korea, and then to meet with Chinese officials on the way back, in Anchorage, Alaska.

National Security Adviser Jake Sullivan is expected to join the Chinese meeting, while Austin will stop in India for meetings of his own.

Throughout the trip, the U.S. officials are expected to discuss denuclearization and other issues related to North Korea in the meeting with the allies. An al-Jazeera report Monday said that the cabinet secretaries’ discussions will likely be “dominated by questions of how to handle an ascendant China and a potentially nuclear-armed North Korea.”

The Biden administration, like the Obama administration in which the president served, is planning to place its foreign policy focus heavily on Asia. When Hillary Clinton was secretary of state in Obama’s first term, her first foreign visit was also to Asia, including Japan and South Korea.

“A free and open Indo-Pacific is essential,” the president said last week during a “virtual” meeting with the other members of “The Quad,” which also consists of India, Japan and Australia. “The United States is committed to working with you, our partners and all of our allies in the region to achieve stability.”

The Associated Press also noted that Biden has to reverse any of the Trump administration’s major policy moves in relation to China.