Wanted: A Collective Risk Management Insurance Plan for the Quad 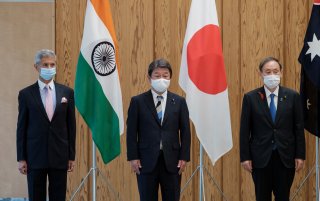 When the top diplomats of the “Quad” security dialogue met virtually recently, it seems they had plenty to discuss. In individually released statements, Australia, India, Japan, and the United States affirmed their shared commitment to cooperating on a slew of issues—so many, in fact, that it isn’t clear how they plan to get everything done.

Maritime security—the Quad’s original purpose—is a clear priority for the four countries, promoted under the banner of a “free and open Indo-Pacific.” Yet that mantra risks dilution as the Quad adds issues like the coronavirus and climate change to its agenda. Compare it to the clarity of another transoceanic security grouping’s motto: NATO’s “collective defense.”

To tackle non-military challenges, the Quad should consider a similar rallying cry. But rather than mirroring the Atlantic, why not try something better suited for the Pacific: collective risk management?

In Search of a Metaphor

This Quad ministerial, the third since its 2017 resurrection, shows that President Joe Biden plans to keep it as a “foundation” of U.S. policy in Asia and that his three Asian counterparts are eager to play ball. That may annoy some critics, who, aware that the Quad owes its revival to growing concern over China, have likened it to an “Indo-Pacific NATO.”

But Quad members have downplayed this comparison, and with good reason: NATO’s core ethos of “collective defense,” wherein an attack on one is considered an attack on all, is a poor fit for Asia. Regional players may share common concerns, but the prospect of NATO-style collaboration brings fears like backlash from China, entrapment in unwanted conflicts, and Cold War-style picking of sides.

The Quad’s core principle is better characterized as a commitment to a “free and open Indo-Pacific,” a phrase coined by Japan in 2016 and since adopted by others. Yet this principle, encompassing freedom of navigation, trade, and more, has been criticized for vagueness. The administrations of Japan’s former Prime Minister Shinzo Abe and former President Donald Trump, for example, could not agree on whether it was aimed at China.

With the Quad embracing an ever-wider range of priorities, it needs a concrete anchor to tie it down. For that, it could turn to another metaphor—not NATO, but Geico, the insurance company. Rather than “collective defense,” intra-Asian security cooperation could be built around collective risk management, aiming to mitigate transnational risks or spread them across like-minded partners.

This change of metaphor would be more than mere pedantry. Collective defense presumes a common enemy that allies must rally their military resources against. Conversely, collective risk management assumes shared dependencies in economic, technological, and other realms that can’t always be fought off with tanks and guns.

This might permit closer ties with “Quad Plus” countries like South Korea and Vietnam, who are wary of overtly opposing China, but keen to tackle shared challenges. With friends, the Quad could spin off an institution—call it the Indo-Pacific Risk Management Council—to coordinate efforts on all manner of non-military security issues. The price of admission? Support for an open, rules-based order in the Indo-Pacific region.

True, the council’s non-military nature means the Quad would have to continue deepening military cooperation on its own. Yet this framework could provide both incentive and cover for greater regional collaboration, and bolster Asia against other threats.

The council would certainly have its hands full: Asia faces several distinct risks, for which the pandemic-stricken world provides some convenient examples. It is most obviously mid-contagion—rife not just with the coronavirus, but other cascading, compounding outbreaks, like ransomware attacks on hospitals or the financial panic of last March.

Contagions, though, are not the only risk. Late last year, China barred billions of dollars of Australian exports, a ramp-up of earlier trade restrictions that PM Scott Morrison termed “coercion.” And countries like Japan and Singapore have limited Huawei’s role in their 5G infrastructure, concerned that it could be used to compromise their supply chains.

Some of these risks stem from China. Some do not. But collective risk management would do well to focus on the risks over the actors, for reasons both diplomatic and practical. After all, the most successful coronavirus responses, like Vietnam’s or Taiwan’s, have come from countries that asked “how will China shape this risk?” instead of “will this help China win?”

Risk management also suggests a fuller, longer-term picture of the challenges that Asia faces. It encourages policymakers to angle for acceptable levels of risk, rather than throw resources at an unquenchable survival anxiety. It implies trade diversification, rather than tariffs; supply chain risk management, rather than tearing out every Chinese-manufactured part.

Put another way: we eliminate threats, but we manage risks. Barring a general and catastrophic nuclear war, China will not go away anytime soon. It is up to the United States, its allies, and partners to decide how they want to cope with that.

More Than an Empty Frame

Even if NATO’s core framework serves the Quad poorly, it still has some lessons to share. Like Europe, national capabilities and interests vary widely across Asia, which would hamper any framework’s implementation.

To solve that, the council could borrow from NATO’s Centers of Excellence, or COEs.

NATO’s COEs are the potluck lunch of the alliance, letting member states show off their signature dish while splitting the cost. Member states selectively fund chosen COEs, training personnel and developing doctrines in their distinctive specialty. The Cooperative Cyber Defense COE is in Estonia, for example, while the Cold Weather Operations COE is in—surprise—Norway.

In Asia, COEs could help countries “burden share,” letting them flexibly decide their niche and level of contribution. A Trade Risk Mitigation COE housed in Australia could identify patterns of Chinese economic coercion and hold private sector summits, for example, while a Cyber Defense COE in Singapore could build capacity through the region. This would suit the Asia-Pacific region better than a one-size-fits-all approach.

Member states could also adopt other big-ticket items, such as an infrastructure development fund to compete with China, a “collective insurance” fund to help industries facing boycotts, or a consortium to offer secure alternatives in emerging technologies like 5G.

And at the agency-to-agency level, they could share intelligence on early-warning crisis indicators (e.g. upticks in respiratory symptoms), war-game crisis responses, or map out supply chain bottlenecks. These regular contacts could pave the way for smoother teamwork when the next crisis hits—be that a cyber espionage campaign, a trade war, or a pandemic.

An Appetite for Risk (Management)

Quad members have already shown interest in cooperation on some of these fronts, such as in Australia, India, and Japan’s joint call to improve supply chain resilience. But cooperation is not guaranteed, and mutual distrust could make for some awkward conversations.

Would South Korea support a boycott bailout fund covering Japanese firms against South Korean citizens’ actions? Would Japan help South Korea manage supply chain risk, after having restricted key exports in 2019? Council members will have to trust that disagreement in some places does not preclude cooperation elsewhere, and hope that the overall benefits of participation can persuade countries to go along with things they would not otherwise.

Across the Pacific, DC-based policymakers might instead quip that this framework has no deterrent power against China. This is fair: against armed conflict in the maritime domain, risk management will not do. But this is also why the Risk Management Council would complement the Quad, not substitute for it. Putting these issues on a separate track would allow the Quad greater clarity of purpose.

Moreover, risk management is not purely ornamental. It insulates allied militaries from interference, ensuring they can operate unhindered by pressure elsewhere. It was Chinese economic coercion, after all, that torpedoed South Korea’s missile defense ambitions, and it is Huawei’s 5G deployments that threaten operational security.

An Indo-Pacific Risk Management Council would guard against that and would be valuable for its own sake. As the region’s GDP grows, so will its interdependencies, but by working jointly, leaders can ward off catastrophic failure, keeping Asia resilient and stable.

The success of so many Asia-Pacific governments in the face of the coronavirus demonstrates what they each can do individually. Let’s see what they can pull off together.

Shaun Ee, a nonresident fellow with the Atlantic Council’s Scowcroft Center for Strategy and Security.