U.S. Should Prove it Has No Hostile Intent Toward Pyongyang 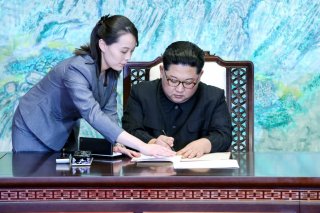 After a relative calm period of U.S.-North Korea relations, the rhetoric again is flying. Kim Jong-un’s sister, Kim Yo-jong, denounced “the ever-increasingly hateful U.S military threats.” The North would act, she said: “We are spurred to further strengthen our national defense and strong preemptive strike abilities to swiftly respond to any military action that is aimed at us.”

Then the United States would have only itself to blame for the consequences. Speaking for an isolated and starving nation, she warned: “The U.S. and South Korea, after ignoring our repeated warnings and pushing ahead with the dangerous war practices, have certainly brought severe national security threats upon themselves.”

The rhetoric is typically excessive, and could be followed with some form of provocation. However, the odds are that the North, uniquely vulnerable after cutting itself off from the world in response to COVID-19, will have to temper its reaction to retain Chinese assistance thought to be keeping Pyongyang afloat. Hence nuclear or Intercontinental Ballistic Missile (ICBM) tests are unlikely.

Although the performance of Kim soeur was theater, the Biden administration responded seriously. State Department spokesman Ned Price insisted: “First, let me reiterate that the joint military exercises are purely defensive in nature. We have made that point repeatedly and it’s a very important one.” He added that “the United States harbors no hostile intent toward the” Democratic People’s Republic of Korea (DPRK).

Which is complete nonsense, as he surely knows. Seventy years ago Washington intervened in war and almost extinguished the DPRK’s ruling dynasty before it began. Only the entry of hundreds of thousands of Chinese “volunteers” saved the North Korean regime. Since then abundant American men and materiel have been arrayed against Pyongyang’s forces, protecting the South in case fighting resumes. In recent years Washington has become actively revisionist around the world, overthrowing recalcitrant regimes and engaging in nation-building (though with less than stellar success, as is evident in Afghanistan).

Presidents Bill Clinton and Donald Trump seriously considered taking military action against the North. The missions were called off not out of consideration for the inevitable death and destruction that would result in North Korea, but fear of the harm that would likely occur to the United States and South Korea. Presidents Barack Obama and Trump greatly strengthened economic sanctions, which were certainly unfriendly acts. Although Trump ended up sending Kim Jong-un “love letters,” the former retained sanctions on North Korea and U.S. troops in the South. If Price genuinely has no animosity toward the South, he is about the only Washington policymaker thus inclined.

Of course, the DPRK is responsible for the fear that it inspires. However, moral responsibility does not change practical reality. It would be foolish for Kim to trust the word of Price or anyone else in the administration. After all, the United States has embarked upon a spate of regime change operations dating back to Ronald Reagan and Grenada. They have grown more common since the end of the Cold War. Most ominous for Pyongyang was the support offered rebels against the same Libyan government which gave up its missile and nuclear programs. Muammar el-Qaddafi met a gruesome fate, which serves as a warning to any future dictator naïve or foolish enough to yield his potentially regime-saving weapons.

To reach an agreement requires a North Korean willingness to denuclearize, or at least limit its nuclear ambitions. For good reason, most analysts doubt the regime will ever abandon its nuclear capability entirely. Even if it is theoretically willing to do so, agreement would require that Pyongyang also trust that doing so will not lead to a Libyan-style outcome. And that would necessitate more than Price’s verbal assurance that America bears no animus toward Kim & Co.

If the Biden administration is serious about pushing for denuclearization, it should focus on actions rather than promises. In the Singapore summit declaration the two governments agreed to improve bilateral relations and the regional security environment. The United States should move ahead unilaterally in ways that demonstrate the possibility of a less “hostile” relationship even if there is little practical impact at the moment.

For instance, the administration should drop the ban on travel to North Korea. Thousands of Americans went to the North before the Trump prohibition without incident, despite a score of cases over the years when visitors got into trouble, some knowingly (by, for instance, evangelizing). And the relationship established between Kim and Donald Trump make future incidents less likely. In any case, Washington does not ban travel to other more dangerous places—Iraq, Afghanistan, Syria, Nigeria, Libya, Haiti, and more.

The United States. should widen and make permanent humanitarian exemptions from both bilateral and international sanctions. Most work by Nongovernmental Organizations (NGOs) is at a standstill because of Pyongyang’s closure to the outside world, but Washington could prepare for a better future. Then humanitarian operations could immediately resume when the borders eventually open.

Moreover, the Biden administration should suggest establishing formal diplomatic ties. The two governments could begin with a DPRK office in Washington if the former didn’t want to allow Americans entry because of COVID-19. Or proxy offices could be established in another country—Singapore or Vietnam, perhaps, or Mongolia, which long has had good relations with both Koreas. Even if little direct contact occurred, the offer would help rebut North Korean complaints about America’s “hostile policy.” And would allow the quick establishment of more regular contact when Pyongyang chooses to reenter the world.

Finally, the United States. should propose a joint declaration of peace with Seoul which the North would be invited to join. After which Washington should indicate that a peace treaty would be one of many subjects to be negotiated when relations are formalized. Such an agreement would offer another symbolic argument against North Korean claims of America’s “hostile policy.”

The objections to such a step are curious. The peninsula is at peace, despite occasional DPRK provocations. If there is an impetus for removing U.S. troops, it would be the lack of ongoing combat, not a generic statement recognizing this geopolitical reality, as well as the South’s dramatic move past North Korea on most measures of national power. Why shouldn’t Seoul defend itself? Add to that America’s perilous overstretch, sure to be worsened by ongoing fiscal irresponsibility in Washington.

U.S.-North Korean relations appear stuck. Kim Yo-jong’s latest tirade deserves to be ignored. Instead of responding to her threats, the Biden administration should look beyond and propose actions to counteract claims of American antagonism. Then Washington would be ready if the North decides to again seriously engage the United States.