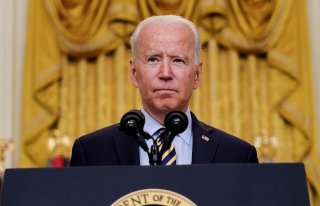 Afghanistan is looking like a disaster. Ten provincial capitals were lost in a week. Afghan troops surrendered without firing a shot. Now, there are ever more pessimistic estimates as to how quickly Kabul might fall.

The Biden administration is U.S. sending troops back to protect the capital airport for emergency rescue flights. Even more embarrassing is its plaintive request that the Taliban not attack the embassy in any assault on Kabul. It claims that the Taliban will regret the hit to its reputation from a successful military conquest, which has been the movement’s objective since its creation in 1994.

Although the tidings are grim, the Ghani government has a chance to recover its balance. The Taliban are manpower-poor and might have trouble maintaining their blitzkrieg. A modicum of competence from Kabul, some evidence that it has the troops’ backs, could stabilize the defense of major cities. Holding urban areas and rebuffing further Taliban advances until fighting ebbs in the winter might convince the Taliban that political negotiations are a better option than more war.

Washington’s bipartisan war lobby naturally views President Joe Biden as the villain. A crescendo of criticism has arisen from the bipartisan war lobby, whose members have never found a conflict they were unwilling to send others to fight. Former president George W. Bush returned to the public square to advocate continuing the war which he started but in which he quickly lost interest, switching to the even more disastrous invasion of Iraq. Noteworthy for personally avoiding combat in Vietnam, he blundered away the lives of thousands of Americans and hundreds of thousands of Iraqis. Joining him as an advocate of the forever wars was Sen. Mitt Romney, another armchair warrior exempted from Vietnam War service, ever ready to send the sons of other Americans rather than his own off to fight in foreign lands.

No doubt, Biden’s handling of Afghanistan leaves much to be desired. For instance, evacuation plans for American citizens, allied personnel, and Afghan loyalists should have been developed during the transition and implemented immediately after the decision to withdraw was made. The administration should not have sugar-coated the expected result but provided details for Americans information on the U.S.-supported regime’s striking incapacity, which would not improve by extending the occupation. The failure to create something capable of standing on its own was an important reason to leave—after two decades of allied effort, there simply is “no there there,” as Gertrude Stein once said of Oakland.

Indeed, the impending debacle exposes the dishonest stance of the “stick-around” crowd. Recognizing the lack of public support for endless wars—70 percent of Americans said they wanted the troops home—opponents of the pullout typically urged keeping a couple of thousand troops on station for just a few more months or years. However, the Afghan government’s impotence and the army’s disintegration demonstrate that such an extension would make no difference in the ultimate fate of the Kabul government. The real choice was not to leave now or in a couple of years. It was leave now or stay forever. Endless war proponents continue to refuse to level with the American people, as they refused to do for the past two decades.

Which sadly was to be expected. Politicians, generals, and the gaggle of parasites to power—consultants, journalists, analysts, lobbyists, scholars, pundits, activists, and more—spent two decades lying to the American people. Successive presidents and commanders promised results that were unattainable and sought to push the tragic denouement into the future, onto their successors. Why would anyone expect anything different when the geopolitical Ponzi scheme came crashing down and policymakers were forced to confront the reality of their handiwork?

Should that seem harsh, then reread The Washington Post’s Afghanistan Papers. Reporter Craig Whitlock noted that “senior U.S. officials failed to tell the truth about the war in Afghanistan throughout the eighteen-year campaign, making rosy pronouncements they knew to be false and hiding unmistakable evidence the war had become unwinnable.” The supposedly best and brightest, determined to salvage reputations and careers, sacrificed the lives of young Americans to maintain a pretense of success.

Many of those once responsible for U.S. forces in Afghanistan while in authority have taken the lead in trying to perpetuate the mission. For instance, David Petraeus is busy trying to shield his reputation and shift blame to Biden as the Afghan project collapses. Joseph Dunford, former chairman of the joint chiefs of staff, recently co-chaired the congressionally mandated Afghanistan Study Group, which predictably insisted that the United States should stay in the country. What other conclusion was imaginable? As the entire geopolitical enterprise collapses, its promoters insist that American forces should stick around with no good purpose and no realistic plan of action.

Reality has been tragic for Afghans. Outsiders fueled a civil war that is five decades old, creating a state that is not real, a political system that does not work, a bureaucracy that does not perform, and a military that will not fight. And the entire structure is crashing down on the Afghans, including those who desperately want to create a liberal society.

With the mission’s original purpose long past, Washington’s wannabe warriors now profess a touching concern for human rights and status of women, but the United States never would have intervened for that reason and has routinely ignored worse violations elsewhere, including by allied states. If these newfound human-rights champions were serious, then the campaign to right human wrongs would start with China and Russia, move through Asia to the Middle East and finish up in Africa. Protecting human rights is but the latest excuse for another imperial project gone bad.

Today, in America, the last refuge of the scoundrel is not patriotism but terrorism. In a world filled with ungoverned and badly governed spaces, it is said that the vital fight against terrorism requires the perpetual occupation of the remote lands of Afghanistan. Yet Al Qaeda, not Afghanistan, was Washington’s original target and America quickly achieved its objective by degrading and dispersing the group.

Osama bin Laden’s presence there reflected his determination to battle the Soviet invaders, nothing more. The attacks of 9/11 caught his Taliban hosts by surprise and had little to do with Afghanistan: the planning was done elsewhere, the participants came from elsewhere, the funding was from elsewhere. After Washington targeted his Afghan hideaway he relocated to Pakistan, America’s nominal ally, just down the road from its military academy in Abbottabad, where he was subsequently killed.

It would be better to start by creating fewer enemies. Terrorism is not a mysterious malady, but typically is a response to intervening in other people’s fights and making other people’s conflicts America’s own. Bombing fewer countries, occupying fewer territories, and killing fewer people is the best way to reduce terrorism against Americans. Then there would be fewer terrorists to fight. Leaving Afghanistan is a good start to a more restrained international strategy.

In any case, perpetual war and occupation of most of the known world forever is not an effective counterterrorism strategy. Washington is far better prepared to detect and confront terrorist threats today. Moreover, one of the primary benefits of withdrawal is already evident—Afghanistan’s neighbors are beginning to plan for a world in which they, not Washington, are responsible for the stability and peace of their own region. That is the way it should have been for the last twenty years.

Today’s tragic climax to America’s involvement in Afghanistan’s war probably became inevitable when the mission changed from counterterrorism to nation-building. Biden is right to end America’s participation in the war. He recognizes the essential truth that Donald Trump expressed badly but correctly: Washington’s first responsibility is to Americans, including those in uniform. It is time for the United States to leave Afghanistan.

Doug Bandow is a senior fellow at the Cato Institute. A former Special Assistant to President Ronald Reagan, he is the author of several books, including Foreign Follies: America’s New Global Empire.