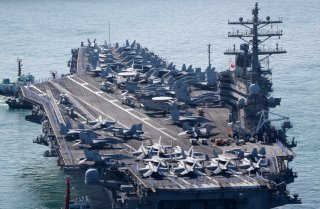 The USS Ronald Reagan, a Nimitz-class aircraft carrier, and its surrounding fleet have initiated a series of joint military exercises alongside South Korean troops amid growing tensions with North Korea.

The exercises began on Monday off the Korean Peninsula’s east coast, one day after Pyongyang tested a ballistic missile. They are projected to continue until Thursday, and will coincide with a visit by Vice President Kamala Harris to South Korea.

“The Ronald Reagan Strike Group’s visit is of strategic importance to the U.S. and Republic of Korea relationship,” Rear Admiral Buzz Donnelly claimed in a statement, using South Korea’s official name. The strike group commander claimed that the exercises represented a “clear and unambiguous demonstration of U.S. commitment to the Alliance.”

The South Korean navy also commended the exercises, claiming that they were necessary to demonstrate the two nations’ “powerful resolve to respond to North Korean provocations.” The USS Ronald Reagan is the first aircraft carrier to participate in a training exercise with South Korea since 2017.

Although the United States and South Korea each framed the exercises as a response to previous provocations by the North Korean government, Pyongyang condemned the deployment as its own provocation.

The exercises also come in the wake of a new law passed by North Korea’s Supreme People’s Assembly—a body that international observers have described as a rubber stamp for the policies of Supreme Leader Kim Jong-un—explicitly allowing North Korea to launch a nuclear first strike and describing the country’s possession of nuclear weapons “irreversible,” marking an end to denuclearization negotiations on the peninsula. At the time, officials in Washington and Seoul condemned the law, describing it as “escalatory and destabilizing” and vowing to strengthen bilateral relations in response.

Relations between the two countries have also been strengthened by the election of Yoon Suk-yeol to South Korea’s presidency in May 2022. Yoon is widely regarded as hostile to North Korea and skeptical of diplomacy with Pyongyang, and vowed during his election that he would strengthen South Korea’s security cooperation with the United States.

North Korea first announced its intention to develop nuclear weapons in 1993, but conditionally agreed not to do so the following year after negotiations with the United States. In 2003, it withdrew from the Non-Proliferation Treaty—the main international agreement prohibiting the development of nuclear weapons by states that do not already have them—and conducted its first nuclear test in 2006.

Although South Korea does not possess nuclear weapons, it is protected by America’s “nuclear

umbrella,” an explicit security guarantee promising that any attack against Seoul will be met with a response from Washington, up to and including weapons of mass destruction.