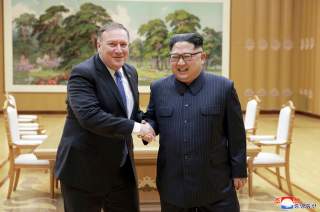 In 2019, we’re likely to see the wedge between the United States and South Korea grow, as well as the continuation of inter-Korean rapprochement. South Korea’s President Moon has gambled his entire presidency—including, bizarrely, his domestic economic proposals—on improving relations with North Korea, so that will continue regardless whether meaningful changes are taking place, and regardless of the status of U.S.-North Korea relations. It’s hard to know whether Trump will pull out of this current reality-show diplomacy he’s been conducting, but a few things I’m certain we WON’T see in 2019:

1. North Korean declaration of its nuclear or missile stockpile. This must be an early step in any denuclearization process because we can’t verify decommissioning or dismantling capabilities without it. Providing a declaration of its nuclear and missile capabilities would render it more vulnerable to U.S. counterforce strikes, so I don’t fault North Korea for refusing to submit to such transparency. But I do fault them for pretending to be willing to denuclearize when doing so would require precisely such a declaration. This is a litmus test for North Korean intentions, and the absence of a North Korean declaration tells us that North Korea’s basic security calculus has not changed from before 2018.

2. North Korean elimination of ANY nuclear warheads. North Korea has no reason to take actions that will make itself more vulnerable unless it has confidence that U.S. attitudes have fundamentally changed. Assuming Kim Jong Un is rational, he will not give up anything costly (like nukes) while the U.S. position on North Korea is so hotly contested. And of course, if a year and a half after the Trump-Kim summit North Korea still hasn’t even given up a single nuclear warhead, then all the rhetoric and presidential boasts about having dissolved the nuclear threat will be born out as the utter falsehoods that most experts have been asserting all along.

3. Meaningful U.S. sanctions relief for North Korea. Sanctions are sticky. Many sanctions are legislated, and I don’t see Congress writing any laws to repeal existing sanctions. Moreover, the sanctions regime is global, and implemented on a country-by-country basis. Getting governments to repeal sanctions enforcement would be a massive effort that—even in a rosy scenario—would be very gradual.

4. A Nobel Peace Prize for anyone. Come on. As I tried to stress in my book, On the Brink, Kim Jong Un was driving the Korean Peninsula’s shift from confrontation to detente. Trump got outmaneuvered, and South Korea’s President Moon was necessary but insufficient to end the crisis. The bulk of the credit for bringing us back from the brink goes—and I say this reluctantly—to Kim Jong Un. And I don’t see anyone clamoring to give Kim a Nobel Peace Prize (nor should they).

There’s a possibility of a second Trump-Kim summit, and the possibility of a rhetorical declaration ending the Korean War, but these are sideshow events sure to generate more news attention than they’re worth. Given 1-4, neither will have much strategic significance. Just like the first summit, the appearance of progress belies the reality of an unchanging—or even worsening—situation below the surface. Also given 1-4, there’s a 50/50 chance that Trump abandons diplomacy in favor of some version of fire and fury if North Korea decides to resume missile testing, which it may if sanctions prove to be as sticky as I think they are.

Dr. Van Jackson is an American political scientist, strategist, and media commentator specializing in Asian security and defense affairs. His second book, just out with Cambridge University Press, is On the Brink: Trump, Kim and the Threat of Nuclear War (2018). He is a Senior Lecturer in International Relations at Victoria University of Wellington, and concurrently holds two think tank appointments: as a Wilson Center Global Fellow at the Woodrow Wilson International Center for Scholars in Washington, and as the Defence & Strategy Fellow at the Centre for Strategic Studies in Wellington, New Zealand.