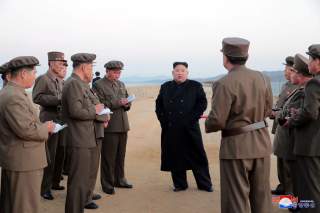 We pursued North Korean denuclearization since the beginning of the Clinton administration without success.

Nuclear weapons offer security against forcible regime change and confer the power to intimidate neighbors and the United States. It is lucrative, as others pay to learn from North Korea. Nuclear capability was the dream of both Kim’s grandfather and the father. It also recently produced major summits with China, South Korea and the United States. It is the source of North Korean power and prestige. It supports the wealth and lifestyle of Kim’s supporters.

North Korea has shown both the skill and will to deploy and employ weapons of mass destruction.

North Korea deployed and employed VX in the crowded international airport in Kuala Lumpur, Malaysia, in February to kill Kim’s half-brother. VX is the most potent nerve gas devised, a colorless, odorless, heavier-than-air gas designed for mass killing. This was a sophisticated, precise attack with a proven weapon of mass destruction.

What incentive can we possibly offer North Korea that would be more powerful, and more valuable, than their nuclear weapons program? What guarantee can we offer that any U.S. agreement will endure through changes of opinion and administrations?

We must reconsider our policy and strategy. Weapons are tools. It’s tough to make policy, let alone war, against a tool, even if it is a weapon of mass destruction. The Second World War was more than a war against submarines, for example. The establishment of greater safety and security of our allies Japan and the Republic of Korea are goals suitable for, and amenable to, policy and strategy development and execution.

Deterrence provides safety and security in two ways—the threat of punishment and denial of capabilities. We must establish the ability to deny North Korea the ability to strike Japan and South Korea. Achieving boost-phase or early ascent -phase destruction of North Korea’s missiles over North Korea with much less expensive missiles and solid-state lasers is becoming possible in the very near term. This capability will greatly reduce the value and the power of North Korea’s investment in nuclear weapons and missiles. This is done by exploiting autonomous technologies and other on-going research and testing. We should get on with it.