What if Kim Jong-un Dies? 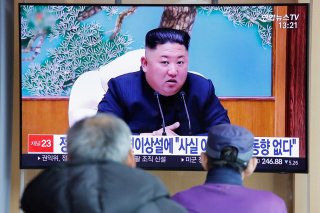 Policymakers in the U.S. and across Asia are considering “intelligence” (rumors and guesswork to the rest of us) that North Korea’s Supreme Leader Kim Jong-un may be in “grave danger” after a heart operation. The principle evidence: his failure to appear last week at Wednesday’s “Day of the Son” celebration. The holiday marks the birthday of Kim’s grandfather, Great Leader Kim Il-sung.

Kim Jong-un’s absence is significant. He was last seen four days prior, at a meeting of the ruling Korean Workers’ Party. However, even few in the Democratic People’s Republic of Korea would know the truth. Outsiders are forced to read the DPRK’s political equivalent of tea leaves.

Multiple accounts are circulating, claiming one or more sources. Some did not specify the operation. Later accounts indicated heart surgery. COVID-19 also was claimed.

South Korea’s presidential office announced: “We have no information to confirm rumors about Chairman Kim Jong-un's health issues that have been reported by some media outlets.” In short, who knows?

Apparently, there have been no movements by the military or other security forces to indicate fear of political instability or a power struggle. The North has weathered leaders’ illnesses in the past. In 2014 Kim disappeared for 40 days, later reappearing with a cane. He reportedly had foot surgery.

More serious was his father’s case. In August 2008 the 66-year-old Dear Leader Kim Jong-il had a stroke, which took him out of action for several months. His brother-in-law, Jang Song-thaek, publicly acted in Kim’s stead. (Jang was later executed by Kim Jong-un, perhaps for attempting to seize power.)

Although there was no evident instability during Kim Jong-il’s infirmity, he apparently sensed his mortality. After his recovery, he anointed Kim Jong-un as heir apparent and began preparing the succession. Kim fils had only a couple years to prepare before the elder Kim’s death in December 2011, but the time proved sufficient. That hand-off proceeded smoothly and Kim Jong-un consolidated power, though most of the supposed “mentors” appointed by his father ended up disappeared or dead.

The only previous DPRK power transition occurred in 1994 when Kim Il-sung died. He had followed no one, having been chosen by the Soviet Union, which at the end of World War II occupied the northern half of the Korean peninsula, which had been a Japanese colony. A respected guerilla leader, Kim cemented his control and managed to survive his failed invasion of South Korea. Saved by Chinese intervention, he deftly wiped out all opposition, especially the pro-China and pro-Russia factions, on his way to securing absolute power.

He began preparing for his son’s succession years before, sidelining possible opponents, such as Kim’s brother, and appointing the younger Kim party chief, allowing the latter to appoint officials and eventually largely run domestic policy. Indeed, there were claims that Kim Jong-il had largely displaced his father before the latter’s death, though that is impossible to confirm.

There was no evident opposition to Kim Jong-il after his father’s death, though he waited to publicly assume his father’s titles. He kept his half-brother, a possible rival, in gilded exile as an ambassador to several European countries. Kim Jong-il’s “military first” policy likely was intended to preserve the loyalty of the one institution that could threaten his rule (and with which he had no experience, unlike his father).

So if Kim Jong-un dies or is disabled, the DPRK will have its first open contest for power in 72 years (75 counting the Soviet occupation). And this would be the first transition in which a family member was unlikely to triumph.

Kim’s children are young and unknown to the public. His wife has been visible but exercises no political power. His brother holds a middling party position and exhibits no interest in governing, which helps explain why Kim Jong-il did not choose the latter as successor. Kim Jong-un’s sister plays an important role, and was recently promoted, but her power appears purely derivative, dependent on her brother. If he dies, there is no reason to believe she can grab the brass ring, especially given the enduring sexism of North Korean politics. The only women with significant political heft have been wives and sisters of the leader.

If not Kim family, then who? The battle is likely to be fierce and unpredictable. Kim Jong-un has regularly rotated and replaced party and military officials, likely to reduce the possibility of anyone challenging him. Being apparent number two has been a dubious honor. Without an obvious heir, the heads of security services might have an advantage, but they have been organized to check each other, again to limit their threat to the political leadership.

Even the most influential players would not have a lock on leadership. In the aftermath of Joseph Stalin’s death in 1953 Politburo members organized against long-time secret police chief Lavrentiy Beria, whose power they feared. The military aided their efforts.

A collective leadership would be possible initially. However, though everyone might prefer that to personal dictatorship, it would be an unstable outcome over time. The DPRK has suffered under single strongman rule since its founding. Even democratic South Korea relies on a powerful president who dominates the political system. Moreover, the totalitarian nature of the North Korean system encourages participants to go big. There is no safety in second place.

The result could be a protracted, destabilizing struggle. Despite obvious hopes for a liberalizing, modernizing successor, that is the least likely outcome. The best case probably is an extended transition during in which no one has an incentive to risk angering influential elites and factions, let alone sufficient authority to impose unpopular disarmament or other reforms. Which would leave the Kim-Trump negotiations incomplete and impossible to finish.

Indeed, something similar happened in 1994. Kim Il-sung was scheduled to meet with South Korean President Kim Young-sam. But the former died two weeks before and relations between the two Koreas quickly deteriorated. Kim Jong-il did meet with Kim Young-sam’s successor, Kim Dae-jung, but that gathering generated little long-term benefit. Nor did the next summit, with Kim Dae-jung’s successor. Eleven years passed before the next inter-Korean summit, between Kim Jong-un and South Korean President Moon Jae-in.

The worst case of a power transition would be a bitter factional struggle and violent breakdown in the North’s political system. The result could be mass refugee flows, loose nuclear, chemical, and biological weapons, combat slopping across borders, and pressure for both China and South Korea to intervene. Seven years ago Bruce Bennett prepared a detailed report for the Rand Corporation on the possibility of a DPRK collapse, warning: “There is a reasonable probability that North Korean totalitarianism will end in the foreseeable future, with the very strong likelihood that this end will be accompanied by considerable violence and upheaval.”

Of course, all of this speculation might be for naught. Although Kim Jong-un’s absence indicates that something is wrong, the incident may prove to be minor. And life in the North then will go on as before.

That would not be good for the North Korean people. But a messy transition could be worse. It long has been said that one should be careful about what one wishes. Regime collapse does not necessarily proceed peacefully or yield a kinder, gentler ruler or system.

But for now all the North Korean people and the rest of us can do is wait. And hope the latest episode of the DPRK’s ongoing drama concludes peacefully.