What Sort of Deal Would North Korea Strike with Donald Trump? 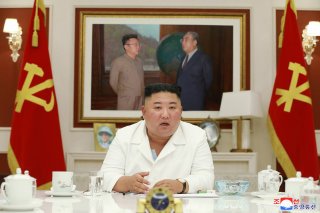 Among President Donald Trump’s many flaws is his belief that everything is about him. Last week he declared that if it wasn’t an election year his administration’s most important adversaries “Iran, China, everybody will be at the table the first day, within 24 hours, wanting to make a deal. Including North Korea.” However, he insisted, they are waiting for the election results, since they “don’t want Trump.”

No doubt virtually every government on earth is waiting anxiously for the ballot on November 3. And many of them, including all of America’s allies and partners, except, perhaps, Saudi Arabia, India, and Israel, are hoping, praying that he will be defeated. Even when he does the right thing he does so in a maladroit, insulting, counterproductive manner.

However, Pyongyang almost certainly takes a very different view. It is in the North’s interest that Trump triumph. After all, his many personal flaws are obvious. And after the election, it will be well-positioned to play on his vanity and take advantage of the opportunities likely to be presented. North Korea also sees what he will never recognize, that he is an atrocious negotiator, prone to the superficial and concerned only with the appearance of victory.

Assume that he improbably becomes the next political “comeback kid.” Then what should the North’s Kim Jong-un do? First, send a lavish congratulatory message. Sincerity is entirely unnecessary. Shamelessly over-the-top is best. Kim should fill his note with flowery insistence the president’s victory represents history’s judgment that the two should work together to bring peace to Northeast Asia. No doubt the president would agree.

Next, Kim should suggest a visit by his sister, Kim Yo-jong, to Washington bearing a special message. She should turn on the charm is originally seen when she attended the Winter Olympics in South Korea in 2018. She should bring a hand-written letter from the Supreme Leader, amplifying his views for the president. As surely Trump would understand, Kim should explain, he did not want to forge a pre-election agreement only to see it overturned by a President Joe Biden who, like Barack Obama, could not be trusted. Surely Trump does not trust Biden! That would destroy all possibilities of cooperation between the two countries.

In his letter, Kim should propose that the two governments begin anew with dramatic steps to demonstrate to an unbelieving world that the two leaders—giving Trump a new sobriquet, perhaps “Extraordinary Leader”—are committed to ending a mini-cold war that long outlasted the Soviet Union. Picking up on proposals made for the Hanoi summit, Kim should suggest that the two governments agree to a multipart initiative to emphasize contact and friendship: opening liaison offices, ending the travel ban, agreeing to cultural exchanges, and declaring an end to the “state of war mindset” that long has dominated the peninsula. All of these are not only achievable, but good policy.

If Exceptional Leader Trump responds positively, Kim should send a negotiating team to formalize the language and plan a summit. With even a limited agreement in hand there would be no embarrassing Hanoi repeat. But why stop there? The representatives of the Democratic People’s Republic of Korea should suggest that the two leaders sign a pact that officially ends military exercises by the U.S. and South Korea and nuclear and missile tests by the North. With this text in hand, no one could again claim that the president had not convinced the DPRK to give up anything. And it would reassure skeptics who are fearfully awaiting the next provocative North Korean test.

As the summit approaches Kim should send another personal letter, again filled with outrageous flattery, to suggest that the two leaders agree on a simple peace declaration, announcing that in their minds the possibility of war is over. But such sentiments should be formalized. Kim should suggest that the Exceptional Leader demonstrate why people around the world applaud his leadership and propose a separate multilateral gathering including China, Russia, South Korea, and the United Nations to negotiate a formal peace treaty.

How better, Kim should ask, to demonstrate the error and unfairness of attacks on the president’s foreign policy? Obama never earned his Nobel Peace Prize, Kim should note. But with this achievement how could Trump be denied one?

At the summit Kim should say that the two leaders have now formed an unbreakable bond. So it is time to address the challenge of denuclearization. Of course, the Supreme Leader should emphasize, he remains committed to eliminating his nuclear weapons, as the president has repeatedly said. And Kim should say he is ready to sign just such an agreement with Extraordinary Leader Trump. However, Kim should add, to give it life the two governments should agree to some initial steps which, of course, would require sufficient sanctions relief to balance the tough steps to be taken by the North.

The Supreme Leader should emphasize that his proposal in no way reflects a lack of trust in the president. But, just like America’s Extraordinary Leader, Kim faces opposition from hardliners. Imagine a North Korean John Bolton! By receiving significant relief Kim would be in a position to move ahead with the president. And, Kim should emphasize, he would be happy to ensure some dramatic photo opportunities—buildings being blown up, materials being handed over to U.S. officials, and the like—which could be deployed by the president’s press secretary. Indeed, the secretary of state, secretary of defense, national security adviser, and even the president would be welcome to come to North Korea and watch!

After such a dramatic success, Kim should suggest, the negotiators should settle on another denuclearization tranche, as it were. Another summit should be planned, to celebrate the blossoming of what the president recognized from the start, a great friendship, even a political love affair. With further sanctions relief set business deals with American companies could be signed—imagine turning the long dormant Ryugyong Hotel into a Hyatt, Hilton, or even Trump Hotel! And what better place to meet to celebrate the triumph of Trump’s diplomacy than at the White House? Of course, the flight would be a little long for North Korea’s fleet of not so modern airplanes. Perhaps the Extraordinary Leader could send Air Force One to give Kim a lift?

During their down time Kim should suggest a win-win solution to the president’s problem in dealing with the difficult South Korean President Moon Jae-in. Obviously, Kim should note, the South takes America for granted. Being a puppet state—Kim should emphasize that he believes he can speak frankly to Trump, given their excellent relationship—usually breeds resentment, which is being unfairly directed at America’s Exceptional Leader.

Obviously, Kim should indicate in his humble opinion, U.S. forces do not belong in South Korea. But the DPRK would be an excellent home for America’s forces, preferably along the Yalu River. Although the North doesn’t have South Korea’s financial wherewithal, his country’s ability to pay back the U.S. would grow along with their economic relationship. In the meantime, U.S. personnel would be appreciated and respected, unlike in the puppet state known as South Korea. As for placing American units along North Korea’s border with China, Kim should suggest that this would be Kim’s and Trump’s little joke at the expense of Chinese leader Xi Jinping. After all, he is overbearing and arrogant, as no doubt, Kim should indicate, the president, as a good judge of character, had already noticed.

Could there be a better culmination of the Supreme and Exceptional Leaders’ wonderful friendship, ready to be told on the big screen?