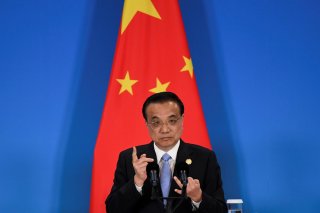 During the first phone exchange between Beijing and Seoul in eight months, Chinese president Xi Jinping issued multiple diplomatic signals to the new Biden administration, suggesting China’s vision for the Korean Peninsula and its goals for the future of Sino-South Korean relations. Although President Xi reportedly stated that the denuclearization of the Korean Peninsula is a mutual interest for both Beijing and Seoul, there is reasonable concern that his perception of denuclearization mirrors that of North Korea’s national initiative: a peninsula void of U.S. military and security presence.

The continued presence of U.S. troops, frequent joint military exercises, and the U.S. deployment of the Terminal High Altitude Area Defense (THAAD) anti-missile battery system in South Korea has led to a barrage of Chinese economic coercive measures, such as business closures and travel bans, against Seoul. Despite diplomatic threats of “destroying” the Sino-South Korean relationship and subsequently damaging the South Korean economy, Beijing failed to bully Seoul into abandoning the deployment of THAAD and ultimately led to a 19 percent decrease in South Korean public support for strengthening ties with China. Moreover, the discord between the people of China and South Korea continued to grow as more than half a million South Koreans signed a petition calling for a ban on Chinese visitors due to the coronavirus outbreak, and Chinese state media openly criticized world-famous K-pop group BTS for commemorating the American and Korean lives lost during the Korean War with no mention of China. While President Xi and President Moon spoke of promoting “high-level exchanges” between their countries, it is unlikely that the majority of the Chinese and South Korean public will embrace each other with similar vigor.

However, the political implications of their conversation cannot be overlooked. Although the Blue House claims the timing of its call with Beijing was unintentional, President Moon has yet to speak with recently inaugurated President Joe Biden on U.S.-ROK strategy towards China and North Korea. More concerning, North Korean leader Kim Jong Un signaled a similar diplomatic message to the United States in 2018 when he unexpectedly visited Beijing for the first time since assuming power in 2011. The spontaneous meeting convened just weeks prior to the planned 2018 U.S.-DPRK Summit in Singapore. It signaled that amidst unprecedented diplomatic openness with both South Korea and the United States, North Korea still valued its relationship with China above all others. Whether intentional or accidental, the Blue House should remain vigilant of such oversight as it indicates distrust and weakness in the U.S.-ROK alliance to exploitative state actors like China and North Korea. Both cases signal a global perception of dwindling U.S. leadership and engagement in Northeast Asia.

In addition to providing an invaluable geographical and ideological buffer, North Korea’s nuclear development is perhaps the greatest deterrent against U.S. influence and military presence extending into China. Although the historically warm and fraternal bond between Beijing and Pyongyang has indeed cooled during the past decade, both governments continue to embrace their symbiotic lips-and-teeth relationship to repel U.S. influence. Beijing’s harsh economic measures following the deployment of THAAD, and its continued facilitation of U.S. and UN counterproliferation sanctions evasions to the benefit of North Korea’s weapons program, indicate how any China-backed denuclearization framework would include the removal of U.S. troops from South Korea.

The unfortunate reality for the Biden administration is that China continues to play a crucial role in the North Korean economy, which is directly connected to its nuclear weapons development program. Any long-lasting and effective peace process seeking complete denuclearization of North Korea must involve China. However, the Biden administration should first reaffirm its leadership role in Northeast Asia and approach China with equal backing from core regional allies, especially South Korea and Japan. Recent controversy surrounding the South Korean government’s alleged plans to construct a nuclear power plant in North Korea through its inter-Korean energy cooperation framework signifies an urgent need for Washington to reevaluate its laissez-faire approach towards inter-Korean dialogue. These past four years demonstrated how the United States cannot simply coerce nations like China and North Korea to acquiesce to its foreign policy objectives solely through unilateral economic pressure.

As multilateral support from sanction-violating nations granted North Korea its ability to indigenize its own nuclear weapons capabilities, the Biden administration must also take a multilateral approach towards engaging China and denuclearizing North Korea. Washington must first reestablish confidence in its alliances and strengthen the faltering ties between Seoul and Tokyo to ensure equal accountability and cohesion on China and North Korea. As Beijing will pounce on any signs of wavering U.S. leadership or support, it is imperative for the Biden administration to quickly resume its leadership role in Asia through multilateral engagement.

Jason Bartlett is a research assistant in the Energy, Economics, and Security Program at the Center for a New American Security. He tweets at @jasonabartlett.