What Will North Korea Say Through its Anniversary Military Parade? 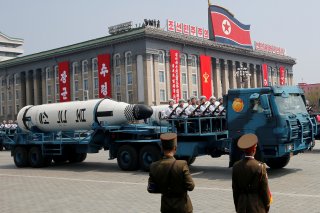 North Korea’s Supreme Leader Kim Jong-un may show his hand for future dealings with America on October 10. The anniversary of the founding of the Korean Workers’ Party (KWP) is always an important occasion, but 2020 is the seventy-fifth anniversary of the formation of what passes for a communist party.

Although he caucused with communist states, Kim Il-sung, originally appointed by Moscow as its occupation frontman, never admitted being beholden to anyone. Alone among communist states, the North displayed not one image of Marx, Engels, Lenin, Stalin, Mao, or any other communist notable. After all, what would juche represent if the nation’s founding ideals were based on the ramblings of a couple of long-dead Germans?

However, the claim of North Korean exclusivity means the KWP celebration is likely to be substantial despite the country’s economic troubles and the world’s coronavirus pandemic. Most everyone in Pyongyang, at least, will be watching. Foreign analysts and journalists will study the parade closely. Which makes it a perfect opportunity for the Kim regime to showcase a new weapon capable of striking the United States.

President Donald Trump’s dramatic opening to the Democratic People’s Republic of Korea effectively ended a year after it started, in February 2019 at the failed Hanoi summit. The administration’s continued demand for full denuclearization before the DPRK received any meaningful concessions doomed additional talks. So Pyongyang largely disengaged from diplomacy with the United States and around the globe. Even unofficial contacts withered.

Yet Kim did not return to the North’s traditional policy of brinkmanship. Most notably, he did not restart nuclear and long-range missile testing. Nor did he launch another invective assault, highlighted by insults directed at the president—such as famously calling Trump a “deranged U.S. dotard.” Last December Pyongyang threatened to resume verbal combat if the president renewed hostilities, but there have been few rhetorical contretemps since.

The North more directly and roughly rejected Seoul’s attempts at conversation, likely because the former sees little positive to be gained so long as the Moon government refuses to challenge U.S. sanctions policy. However, the recent killing of a South Korean official in unclear circumstances prompted an apology of sorts from Kim, which might presage a softening attitude. Or perhaps Kim is veering toward conciliation with the South to prepare for an increasingly likely Biden administration, which seems unlikely to resume Trump-style summitry.

The parade provides an excellent opportunity to make implicit threats and increase tensions without testing American red lines. Resuming ICBM and/or nuclear testing would break a commitment, ostentatiously accelerate military developments, and increase threats to the U.S. homeland. The consequences would be unpredictable, but possibly dangerous.

For instance, Trump, especially if looking for a miracle deus ex machina to win reelection, might restart his “fire and fury” policy. Although a President Joe Biden likely would be more measured, his first reaction would not be to ease sanctions and attend summits. Indeed, with Iran likely much higher on an incoming Biden administration’s agenda, he might decide on a tougher response to North Korea to gain leverage in reinstating and/or renegotiating the nuclear deal with Tehran.

In contrast, a parade exhibition is less provocative. It is as likely to showcase possibilities, desires, wishes, dreams, and bluffs as realities. The threats are more theatrical and look more theoretical, offering more opportunity to dissuade Pyongyang from moving forward without considering military options.

Nevertheless, the DPRK could put on quite a show. A 38 North analysis of satellite data indicates that the North Koreans have built temporary shelters large enough to hold missiles and transport vehicles. The Carnegie Endowment’s Ankit Panda predicted: “The North Koreans are going to come out with potentially scores of solid propellants, medium range missiles.”

Although even mid-range missiles are nuclear-capable and able to strike U.S. bases in the region, their limited range makes them less fearsome for Americans and American policymakers. So something more is likely. The regime hasn’t showcased an ICBM since early 2018, when the Kim-Trump show debuted. As 2020 dawned Kim promised a “new strategic weapon,” which remains as yet unseen. It most likely is one or more long-range missiles.

An apparent transporter-erector-launcher (TEL) was spotted at the capital’s parade ground, which could be significant. Chad O’Carroll of NKNews noted that “North Korea suffers from a historic inability to develop its own heavy launcher vehicles, so the country has only shown small numbers of medium and long-range missiles at military parades. Therefore, if many heavy launcher vehicles are shown transporting an expanded missile arsenal at the parade in October, it would mean the country has markedly improved its capabilities.”

Such a missile display—even if mock-ups were used—would provide a powerful reminder to Washington on why negotiations are in America’s as well as North Korea’s interest. Moreover, the North might emphasize numbers by parading several ICBMs. Some analysts believe that the number of storage units suggest deployment of as many as a dozen. The larger the number, the more difficult for the United States to either preempt or defeat an attack. However, displaying what might merely be a model is not likely to panic America and drive a president or president-elect to act precipitously.

Another possibility would be to highlight development of an SLBM, or submarine-launched ballistic missile. However, the smaller weapons would look less formidable on parade. The threat also would be less. Although submarine-launched missiles have a formidable reputation, the North is far from having a workable fleet capable of carrying SLBMs and the United States has long invested heavily in anti-submarine technology to counter the Soviet Union and now China. Pyongyang could more cheaply and effectively increase the number of mobile land-based missiles.

North Korea also likely aspires to develop multiple independent re-entry vehicles, which allow one missile to carry several warheads. There are no reports that Kim’s engineers have produced such a device, which also would not be much of a parade prop. Some conventional weapons look impressive, but the regime has been devoting its limited resources elsewhere for years. Which is another reason the North is likely to emphasize its missiles in the parade: in this field Pyongyang’s progress has been significant, including the development of ICBMs and solid fuels.

Whatever occurs at the parade likely will constitute the North’s full “provocation” ahead of the Nov. 3 election. Pyongyang would prefer a Trump victory, but any dramatic threats would undermine the president and/or might trigger a violent reaction.

However, additional provocations are probable after the election. The DPRK might seek to encourage another presidential foray into dealmaking if Trump wins; reminding him of the North’s capabilities would encourage him to be more flexible and offer smaller deals involving at least some sanctions relief.

If Biden is victorious, the North probably will raise tensions to increase its leverage with the new administration. Creating a sense of crisis might be the only way to force Korea onto the Biden agenda. And to encourage a more active stance and willingness to negotiate than was evident in the Obama administration.

As in the past, Pyongyang will attempt to communicate with America through a parade. It won’t be a message Washington wants to hear. But that is the price of the Trump administration failing to effectively follow up on the president’s diplomatic breakthrough. The next administration should recognize that the North doesn’t plan to abandon its nukes and shape policy accordingly.