Which Will South Korea Choose: The U.S. or China? 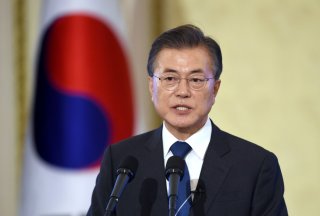 The United States and China increasingly appear headed toward a new Cold War. It won’t be a repeat of Washington’s drama with the Soviet Union: no one imagines the complete decoupling of two economies today so tightly knit together. However, suspicion, hostility, and conflict increasingly look to become the primary measures of Sino-American relations.

What of governments caught in between the two behemoths? The ancient Korean kingdom long viewed itself as shrimp among whales—the empires of Japan, Russia, and China. Koreans suffered greatly when the former defeated the latter and turned the peninsula into a colony. However, today’s South Korea, more than a shrimp, is facing increasing pressure from two mega-whales, the People’s Republic of China (PRC) and the United States, to choose between them.

Throughout the Cold War, there was no choice to make. North Korea was backed by the Union of Soviet Socialist Republics (USSR) and PRC. South Korea was supported by the United States and (somewhat less enthusiastically) Japan. “Cross-recognition” among the various parties was suggested to reduce regional tensions. The end of the Cold War led to Russian recognition of the Republic of Korea (ROK) in 1990 and Chinese recognition two years later. However, no similar allied move was made toward the Democratic People’s Republic of Korea (DPRK).

Although Beijing and Washington obviously differed in their perspective toward the North, they both opposed the DPRK’s nuclear program. Pyongyang’s relationship with China was cold, a matter of practical politics rather than fervent ideology. Moreover, China was as much a suitor of the South as the latter was of China. With its focus on economics, Beijing was determined to open an economic relationship with the ROK; the latter saw China as a force for moderation in dealing with North Korea.

Despite the Tiananmen Square massacre, Sino-American relations remained strong. Chinese political ambitions remained modest so there were few serious conflicts between the two governments. If Seoul had been asked to choose, it would have picked America, which was more important for both security and economic reasons.

The international environment has since changed dramatically. The U.S.-China relationship deteriorated dramatically over the last decade, and especially the last couple of years. Beijing typically operates without allies but is increasingly ready to punish governments that adopt policies judged hostile to the PRC. The United States is pressing its allies and friends, even those well outside of Asia, to join an anti-China coalition.

In 2017, Beijing essentially launched economic war against South Korea for allowing deployment of America’s THAAD missile defense system. Washington pushed Seoul to publicly criticize the Xi government for effectively outlawing political opposition and free speech in Hong Kong. Most recently the ROK attempted to say enough about Taiwan to satisfy Washington but not so much as to upset Beijing—without success on the latter case, however.

Maintaining both major power relationships without giving offense is going to be increasingly difficult for Seoul. Strife and military confrontation increasingly dominate U.S.-China relations. As Taiwan moves to the fore other countries will find it harder to maintain neutrality.

Unfortunately for South Korea, an alliance that doesn’t speak to Washington’s priorities doesn’t matter as much to the United States. Randall G. Schriver, a Trump Pentagon official now with Project 2049 Institute, last week chided the ROK: “You can’t have an alliance where one side views something as the primary important challenge, the organizing principle, and the other side doesn’t embrace that without some loss of relevance over time. And that’s the drift we’re on.”

After all, North Korea threatens America only indirectly, because of Washington’s alliance with Seoul. Yet the South is stronger than its antagonist on almost every measure of power. In contrast, the United States is concerned about Taiwan because the latter is significantly weaker than China. Washington is seeking allies to meet this serious challenge—and hoping to rely on the South, which has benefited so much and long from American support.

South Koreans are not alone in wanting to fight only when it is their interest. The Europeans are shameless free-riders. They don’t want to act on each other’s behalf, let alone for America. For instance, last year’s Pew Research Center found that just a third of Germans favored defending European allies. Yet the former presumes that the U.S. cavalry, so to speak, will rush to save them if necessary. Washington needs a better set of allies.

Indeed, the ROK will also be at increased risk because Japan is edging closer to America and against China. Although nothing is certain in wartime, leading figures in Japan's ruling Liberal Democratic Party are pressing to increase military expenditures and align with the United States against the PRC in a conflict over Taiwan. The American public would not soon forget the contrast between a Japanese government supporting America and a South Korean government refusing to do so.

As relations between the United States and PRC worsen, more countries are likely to be caught in between. The South Korean “shrimp” is likely to suffer when the American and Chinese “whales” fight. If forced to choose, what will Seoul decide?