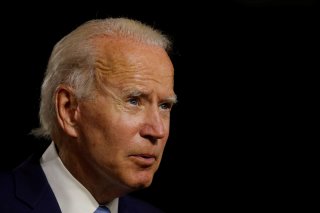 President Donald Trump’s attempt to pursue a rapprochement toward North Korea clearly has stalled, although there may be an attempt to jump-start the process if he wins re-election. Contrary to the conventional wisdom, Joe Biden would be less, not more, likely than Trump to reduce tensions with Pyongyang. In January 2020, Biden stated that there was “no way” that he would agree to meet North Korean leader Kim Jong-un without “preconditions.” He was referring to tangible steps from Pyongyang to reverse its nuclear weapons and ballistic missile programs. That is roughly the same position that Biden’s running mate, Kamala Harris, has taken, although she has explicitly endorsed partial sanctions relief in exchange for some concessions from Pyongyang on the nuclear issue.

Biden—along with most other leading Democrats—has been a virulent critic of Trump’s outreach efforts. "Look, we gave him [Kim] everything he’s looking for,” Biden stated. “The president showed up, met with him, gave him legitimacy, weakened the sanctions we have against him." The North Koreans, for their part, are decidedly unfriendly toward Biden, referring to him as a “rabid dog who deserves to be beaten to death with a stick,” among other shrill epithets. Given the hostile attitudes on both sides, there is little basis for a meaningful dialogue during a Biden presidency.

Demanding major concessions before another summit meeting can even take place guarantees that productive negotiations will be stillborn. In fact, Washington’s continuing insistence on Pyongyang’s “complete, verifiable, and irreversible” denuclearization torpedoed Trump’s attempt at rapprochement. North Korea’s leaders believe that a nuclear arsenal is their only reliable means of deterring the United States from contemplating the kind of forcible regime change Washington has pursued against several other countries.

Even in the unlikely event that Biden’s uncompromising stance toward North Korea is mostly political posturing during the presidential campaign, he might find it extremely difficult to abandon that stance upon entering the Oval Office. Given the vitriolic denunciations that congressional Democrats (along with Biden) leveled against Trump for even meeting with Kim, it will be awkward to reverse that position. Although some of the opposition undoubtedly was partisan opportunism, much of it appeared to reflect genuine hatred from strong advocates of both human rights and nuclear disarmament. They regard the mere existence of North Korea’s regime as an affront to both values. Although party loyalty to a Democratic president might mute that criticism to some extent, it will not eliminate it.

In addition to the resistance Biden could expect from some members of his own party if he sought to improve relations with Pyongyang, he would be far more vulnerable than Trump has been to denunciations from Republican hawks.  GOP hardliners, such as Senator Ted Cruz (R-TX) and Tom Cotton (R-AR), were not pleased with Trump’s North Korea policy, but most of them withheld at least some of their fire. They would have no such restraint with respect to a president from the rival party.

About the best we can hope for from a Biden presidency is a continuation of the sterile, futile policy over the decades of demanding that Pyongyang return to nuclear virginity. A worrisome possibility is that he succumbs to pressure from militant hawks in both parties and adopts a dangerously confrontational stance toward Pyongyang.  In any case, meaningful progress toward a more peaceful Northeast Asia would be unlikely.

Ted Galen Carpenter, a senior fellow in security studies at the Cato Institute and a contributing editor at the National Interest, is the author or co-author of 12 books on international affairs, including The Korean Conundrum: America’s Troubled Relations with North and South Korea (Palgrave Macmillan, 2004).