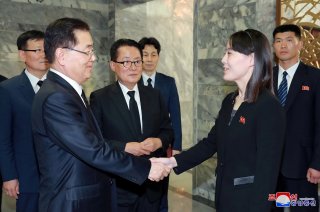 What if Kim Jong-un were suddenly to die? The honest answer to this answer is that nobody really knows.

However, since we are all on an equal footing, my theory is that Kim Jong-un’s sister, Kim Yo-jong, would take control. While numerous op-eds have focused on Kim Y-Jong’s character and position with the North Korean leadership. I would like to focus more on the ideological reasoning as to why I feel she would be Kim Jong Un’s most likely successor.

As a hereditary dictatorship, the “Baekdu Revolutionary Bloodline” is the main source of legitimacy for the Kim family dynasty. Kim Il Sung, Kim Jong Il, and now Kim Jong-un all possessed this lineage, which allowed the family to cling to power during times of internal distress. This heritage is a central tenet of North Korea’s nationalistic ideology. As a guerilla fighter in the 1930s, Kim Il Sung supposedly fought against Japanese colonialists near his Mount Baekdu base. Kim Jong Il was supposedly born at this Mount Baekdu base camp. Now, Kim Jong-un takes official visits to Mount Baekdu. By representing Mount Baekdu as the birthplace of the Korean Revolution and the Kim family as being uniquely placed within this national landscape, Pyongyang’s propagandists have been able to forge a mythology that positions the Kim family as the sole protectors and saviors of the Korean nation. This mythology has led to a militant and anti-colonial mentality in the leadership and population that has persisted since the founding of the DPRK in 1948.

While North Korea is an absolute autocracy, the regime in Pyongyang still depends on a degree of popular support. Political symbolism is a way to bolster this domestic support. No government, not even one as authoritarian and brutal as the one in North Korea, can persist without some domestic support. The symbols of the “Baekdu Revolutionary Bloodline,” whether it be photo-ops of Kim Jong-un riding a white horse in the snow-covered Mount Baekdu terrain or students taking pilgrimages to Mount Baekdu, has allowed the regime to retain a certain amount of legitimacy and popularity within North Korea. As someone with this ancestry and bloodlines, Kim Yo-jong would be uniquely situated to take on the legacy of the “Baekdu Revolutionary Bloodline.”

Some North Korea scholars argue that patriarchy within the DPRK leadership would not allow Kim Yo-jong to take in power. I disagree. North Korean propagandists have historically given the Kim leadership motherly qualities. Whether it was referring to Kim Il Sung’s “bosom” or representing Kim Jong-un as a guardian of the nation’s children, the North Korean leadership are represented in domestic propaganda as both motherly and fatherly leaders. In addition, the wives of Kim Il Sung and Kim Jong-un have both been highlighted in the state-run media. Kim Il Sung’s wife, Kim Jong Suk, was memorialized in North Korean propaganda as a “revolutionary immortal” that perfectly embodied North Korean womanhood. As a leading Party official with the DPRK’s Propaganda and Agitation Department, I have no doubt that Kim Yo-jong would be able to cleverly forge a mythology around her femininity in order to strengthen her succession to the throne.

However, much of this depends on the children of Kim Jong Un and his wife, Ri Sol Ju. If they give birth to a male heir, I have no doubt that the child would be groomed from an early age to take over for a corpulent father one day. In the meantime, Kim Yo-jong would be more than able to take the leadership position.