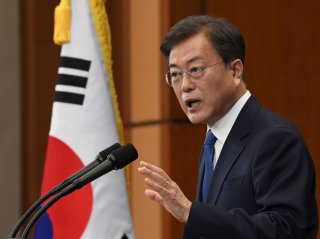 On May 31, President Donald Trump openly mused about enlarging the G-7 to the G-11. U.K. Prime Minister Boris Johnson, Canadian Prime Minister Justin Trudeau, and French President Emmanuel Macron’s administration have all shot down the idea as a non-starter if it hinges on Russia being one of those new members.

But there is one country that would happily jump at the opportunity to be included in such an esteemed group of wealthy nations: South Korea.

South Korean President Moon Jae-in expressed his support for expanding G-7 membership almost immediately after Trump made the off-the-cuff remark. Moon was the first foreign official to discuss it with Trump on the phone. It is not a surprise Moon would want to join the crop of wealthy nations. Membership has its privileges, not to mention a rise in South Korea’s international status.

Seoul has some serious business to attend to. Any diplomatic forum that provides President Moon with an opportunity to press his case directly to the U.S. president is an opportunity he can’t pass up.

1. Cost-sharing: On May 2, Washington and Seoul chipped away at their months-long dispute over the issue of cost-sharing and who should pay what for the 28,500-strong U.S. military presence on South Korean soil. According to U.S. Forces Korea, the Trump and Moon administrations reached a $200 million agreement on salaries for the roughly 4,000 South Korea nationals who work for the command but have been furloughed since April. The overall negotiations over a revised Special Measures Agreement (SMA), however, is still very much an open issue.

In April, President Trump proudly boasted that he rejected Seoul’s latest offer, calling it insufficient and unfair to the United States. Notwithstanding the customary descriptions of the U.S.-South Korea alliance as being “ironclad” and largely unaffected by the cost-sharing talks, the reality is that the stalemate is not making bilateral relations any better. The willingness of Trump administration officials to call out South Korea loudly and publicly in major U.S. newspapers doesn’t strike a particularly comfortable tone for those in Seoul, who understandably continue to consider Washington’s position inflexible, if not outright ridiculous.

While the G-7 would not be an appropriate forum to discuss bilateral issues between the U.S. and South Korea, it would provide Moon with one more chance to schedule a sit-down on the sidelines to press upon him the need to strike a deal both men could live with.

2. Peace on the Korean Peninsula: Washington and Seoul ultimately have the same objective: to see North Korea eliminate its nuclear weapons program. But both nations have a very different way of arriving at that goal (one fanciful to begin with). Like its predecessors over the last 30 years, the Trump administration is far more adept at using the stick on Pyongyang over the carrot—sanctioning North Korea’s exports, filing criminal indictments on entities associated with the North Korea market, and making it clear to Pyongyang that no normalization can occur unless it hands over its nuclear weapons. President Moon may not say it out loud, but he has never bought into Washington’s approach—nor does he believe it is particularly effective. Given the track record of U.S. policy ever since the North became a nuclear power, history would validate Moon’s interpretation of events.

The South Korean approach towards the North is the inverse of Washington’s, relying on establishing a foundation of trust and momentum before denuclearization can even be considered a remote possibility. Creating momentum between the two Koreas is precisely the goal of Moon’s inter-Korean initiative, which seeks to regularize dialogue between Seoul and Pyongyang and to begin to bind together the economies of both. Im Jong-seok, Moon’s former chief of staff, said that the South Korean president intends to push forward with his reconciliation initiative. Moon, however, can only do so much by himself when U.S. and U.N. Security Council sanctions obstruct all but the most minor projects.

The G-7 is yet one more opening for Moon to enlist the support of countries in Europe who are more amenable to the way Seoul looks at the problem.

3. The China issue: The last thing South Korea wants is to be stuck in the middle of a U.S.-China cold war. The former has been Seoul’s most important security ally for the last 70 years. The latter is its largest trading parter; in 2018, slightly more than 25% of South Korea’s exports went to the Chinese market. South Korea may have the 12th largest economy in the world with a $1.6 trillion GDP, but it is largely an export-driven economy, which makes it highly vulnerable to market fluctuations or bilateral trade disputes.

Indeed, Moon has some personal experience here. He inherited a situation where Beijing, upset about the previous administration’s agreement to station the U.S.-made THAAD anti-missile system on its territory, was in the process of penalizing South Korean business interests inside China. Chinese tourism to South Korea plummeted by 50% between 2016 and 2017 and the South Korean corporation that sold the land for the missile system—Lotte—saw 70 of its China-based stores closed down for safety violations.

The South is caught in a catch-22: support the U.S. against China and risk a steep economic contraction. Choose China over the U.S. and risk a decrease in U.S. troop levels by a president who demands full loyalty and whose negative comments on South Korea can be traced back to the 1980’s. As Hyundai economist Choi Yang-oh aptly observed, "We have to walk a tightrope between the US and China fighting for global hegemony. We can’t afford to alienate either one of the two.”

That is a message Moon will likely take in any meeting with Trump—please, Mr. President, leave of us out of it.

At this stage, Trump’s G-11 is nothing but an idea floated in thin-air. Unanimity will be required to turn it into a reality. But if the concept goes ahead, it could pay dividends for South Korea.