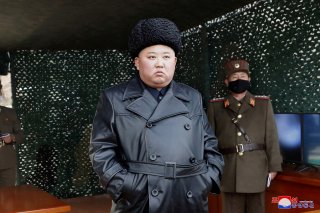 Kim Jong-un’s long absences from public view continue to mystify observers, but his reappearances should cause more concern. His latest public outing was to the Central Military Commission.

The purpose: to address “new policies for further increasing the nuclear war deterrence” of North Korea. The regime explained that the orders issued dealt with “putting the strategic armed forces on a high alert operation in line with the general requirements for the building and development of the armed forces of the country.” Those attending also discussed implementing “crucial measures for considerably increasing the firepower strike ability of the artillery pieces.” Overall, the attendees considered how to “reliably contain the persistent big or small military threats from the hostile forces.”

Alone, this does not indicate a change in Kim’s approach. However, he previously walked back his announcement to the North Korean people that the Democratic People’s Republic of Korea had completed its deterrent and was going to focus on economic development. Indeed, in his most recent New Year Eve’s message he warned of difficult times ahead and spoke of having to counter Washington’s “hostile policy.”

Moreover, Pyongyang has increased weapons testing—there were more short-range missile tests in March than ever before. These missiles, which use solid fuel, provide useful information for longer-range systems, capable of hitting the United States. Some other activities might presage both ICBM and nuclear tests, which could bring to fruition the “new strategic weapon” that Kim threatened in his speech to the Korean Workers’ Party plenum.

The U.S. response has been as inadequate as one would expect from the Trump administration. National Security Adviser Robert O’Brien recently declared that “Ultimately, the North Koreans, if they want to reenter the world, if they want to have a great economy—and we hope they do, they are going to have to give up their nuclear program.” His only hopeful note was to observe that “The president’s engaged in some excellent personal diplomacy with Kim Jong-un.”

Alas, though President Donald Trump deserves credit for being willing to engage Kim, he left the execution to a coterie of hawkish advisers who were more comfortable with coercion than persuasion—the “Libya model,” as John Bolton put it. This resulted in a futile demand of everything before anything, that is, the North must turn over its nukes before the U.S. reciprocates. Kim is many things, but evidently, he is not a fool, so the president’s personal diplomacy so far has had little impact.

O’Brien’s argument that North Korea must disarm to “reenter the world” and “have a great economy” is belied by the fact that several nations in the world possess both nuclear weapons and developed economies. That is, they enjoy both security and prosperity. Forced to choose between the two goals, Kim so far has selected security, which should come as no surprise. Governments, including the one located in Washington, DC, routinely put defense first. Why would Pyongyang do anything different?

Does North Korea still have aggressive intentions toward the South? It is impossible to know. Kim is no liberal humanitarian, but unlike his father and grandfather, he desires improved economic development and international status. In any case, North Korea is at significant risk, largely abandoned by its former allies, China and Russia, while facing a far more powerful South Korea. Lurking in the background is historic enemy Japan. As well as the global superpower, ever ready to defenestrate vulnerable regimes. Like in Libya, after Muammar el-Qaddafi trusted the United States and closed his missile and nuclear programs.

If Washington policymakers were honest, then they would acknowledge that there is little they can do to change Kim’s calculus. In reality, denuclearization talks are just a form of Kabuki Theater. No offer or concession is likely to change that.

Still, diplomacy could do some good if it refocused on more realistic ends. A good first step would be to build a bilateral relationship. For instance, Washington should allow travel between the two countries, initiate diplomatic relations between the two governments, forge a multilateral peace declaration, and ease restrictions that hamper humanitarian programs. None of these concessions would cost anything. Most would offer obvious if modest benefits. All would help normalize the relationship.

In this case, at least, Chinese foreign minister Wang Yi was correct when he argued: “Having a dialogue is better than having nothing at all. We would like to see continuous interaction between DPRK and U.S. leaders.” In his view, “building mutual trust and breaking the impasse on the peninsula would require more concrete steps.” Of course, even the right measures might not cause the North to respond as America and South Korea desired. However, Kim’s intentions should be tested.

As a second step, the United States should agree to revise United Nations sanctions to give Seoul room to propose joint development projects with the North. Obviously, Washington always has considered itself to be the senior partner. Yet South Korea has far more at stake in the region’s stability and peace, and in reaching détente on the peninsula. Thus, Seoul’s relationship with Pyongyang is more important than Washington’s ties with Pyongyang; America should allow South Korea to take the lead in dealing with North Korea. Indeed, Army Gen. Vincent K. Brooks, who commanded United States Forces Korea from 2016 until last year when he retired, suggested that Washington should learn from the South: “In Korea, you build a new relationship first, then that builds trust and you will deliver on the things you say you will deliver on.”

The two governments should agree on a set of policies, schedule of sanctions relief, and conditions to suspend or eliminate restrictions. Critics no doubt would scream appeasement, but “maximum pressure” has failed. Pyongyang has neither given up its weapons nor made any other significant concession in response. Washington needs to find a way out of its policy cul-de-sac.

The third step should be that U.S. policymakers acknowledge to themselves, even if to no one else, that discussions with the North over denuclearization are but a polite fiction. Washington should develop proposals for arms control which would reduce security threats while advancing the theoretical cause of nonproliferation.

There is no imaginable circumstance under which Kim will abandon weapons of such great value in return for a mess of American pottage, promises that could be broken at any moment. However, he might agree to important limits, for a price. Additional sanctions relief, to be sure. Membership in international organizations and foreign aid, perhaps. Such possibilities deserve exploration. A North Korea with its nuclear arsenal capped safeguards against proliferation in place, and inspectors on the station would be significantly less threatening than the North Korea of today.

Most fundamentally, the regime has lost control of information. In late May the government complained that “the imperialists are desperately scheming to cleverly hide their rotten ideology and culture in texts, melodies, and daily necessities.” The regime complained that viewing a foreign “movie or a song as a mere amusement, without self-awareness . . . will make the bourgeois lifestyle rampant, discoloring the people’s culture.” Such a plea is a sign of desperation in a country where most people have seen at least some South Korean television and movies.

Since the information Pandora’s Box has been opened, the United States should work with South Korea to further ease the North Koreans’ people’s access to information. That is one important reason to allow travel both ways. Washington should help empower the North Korean people to decide their own future. That possibility clearly unsettles the regime.

It would be unfortunate, even tragic if the opportunity created by Trump’s opening to North Korea is lost. The Korean War began seventy years ago. The human and financial costs were horrific. Washington’s greatest success in the following years was to help prevent a violent reprise. The North could wreak far greater havoc on its neighbors and the United States today if it had nuclear weapons. Washington should focus its efforts on negotiating a stable peace.

Doug Bandow is a senior fellow at the Cato Institute. A former special assistant to President Ronald Reagan, he is author of several books, including Tripwire: Korea and U.S. Foreign Policy in a Changed World and coauthor of The Korean Conundrum: America’s Troubled Relations with North and South Korea.