Would an Official End to the Korean War Really Change Anything? 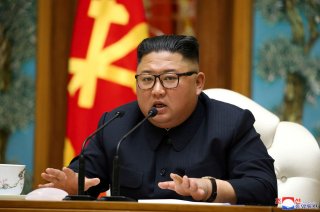 As a historian, I typically write about the past. Today though, as I sit to write about the future, one wonderfully liberating thought flashes through my mind: since I am writing about events that have not yet occurred, no one can say I am wrong! Five years from now, I suppose, someone choosing to re-read these entries might find my predictions to have missed the mark, but by then we might also have a world largely bereft of human life due to some combination of coronavirus, global warming, and a lack of college football, so my short piece about a potential end to the Korean War seems unlikely to garner much attention.

This is, I admit, an exciting lack of accountability, one that encourages me to change the parameters of the question slightly. A formal end to the Korean War would certainly be nice, and it might even be possible. The more important question, though, is whether or not such an agreement would have any practical effect. Signatures on a piece of paper followed by a dramatic press conference would be welcome. But, would they actually have any impact? Here, I admit to being quite skeptical. Many factors lay at the heart of my pessimism, but three are most prominent, all of which stem from the specific political needs and internal dynamics of the major players.

First, the Trump administration has embraced a more personal style of diplomacy that has, in the case of North Korea, neglected to develop the institutional framework critical to making significant policy changes. Not only has such an approach been largely unfruitful, it has actually weakened the American position. Should Trump be voted out of office in November, his replacement will essentially have to start from scratch in developing DPRK ties, an effort that will be particularly complicated since we can expect candidate Biden to offer harsh condemnation of Trump’s connection to a dictator. Trump has also already used some of the diplomatic weapons in his arsenal, meeting with Kim for summits and photo ops, for example, and even walking into North Korea. These are carrots usually reserved for the end of a diplomatic process, as part of a negotiated package that includes mutual concessions. Instead, Trump gave Kim the favorable media coverage he sought and got nothing in return. Offers of economic inducements will also be less enticing than Trump seems to think, since the emergence of a market-based middle class is likely to be seen in Pyongyang as a double-edged sword at best. And with the recent decline in U.S. prestige and influence across the world, Trump (or his replacement) will also have less to offer by normalizing relations than in the past.

At the same time, forces in South Korea are also likely to temper enthusiasm for change. Studies have shown that the ROK’s younger generation is less likely than its elders to see the North as part of a united nation, and are more likely to hold hostile views towards the DPRK. Every year that passes sees this generation wielding more political power, making it even more unlikely that future ROK governments will continue President Moon’s outreach effort with the same commitment. Recent DPRK bellicosity seems likely to further exacerbate those trends for the near future, as does the fact that Moon, despite his desire to maintain talks, is unlikely to break with the wishes of his American ally, particularly considering the economic problems expected from the coronavirus crisis.

The biggest obstacle to a true reconciliation, however, emerges from Pyongyang. Historically, the Kim family has relied on the presence of an external threat to justify their domestic shortcomings and rally the people behind them. DPRK leaders thus need an enemy to rationalize their despotic behavior and perpetuate their regime. George Kennan once famously wrote of the Soviet Union that its leaders were driven to put forward a vision of the outside world as “evil, hostile and menacing” because that fear “provides justification for that increase of military and police power of Russian state, for that isolation of Russian population from outside world, and for that fluid and constant pressure to extend limits of Russian police power which are together the natural and instinctive urges of Russian rulers.” The Soviet Union is long gone, but a similar world view exists in Pyongyang where for decades a family of ruthless tyrants has generated repeated external crises in order to perpetuate their control. Evidence even suggests that the Kims are at their most provocative in international relations when things are domestically unstable, as seems likely in the current environment of the coronavirus and economic sanctions. North Korea is thus more likely to spend the next few years reverting to its traditional saber-rattling than it is to extending an olive branch, and with presidential elections in both the United States and South Korea in the next few years, such behavior will likely quash even the most basic steps towards normalization.

Hopefully, anyone looking back at this piece in five years will find me to have been brutally wrong. I am certainly hoping for genuine peace and even friendship, so I will happily split a bottle of soju with the first person to contact me in five years to mock this prediction. Still, the lessons of the past and the conditions of the present leave me skeptical about those chances.