Is North Korea Planning to Disrupt the 2020 U.S. Presidential Election? 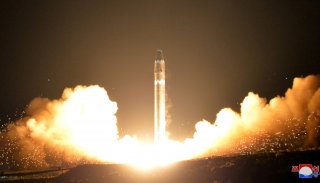 Two years ago, the improbable became the new reality when Kim Jong-un and Donald Trump met in Singapore. The dramatic opening was hobbled by the president’s lack of diplomatic acumen and his aides’ unrealistic demand that North Korea disarm before receiving any benefit for doing so. Still, opportunities never before seen seemed to beckon.

Today the possibilities appear to be closing rapidly. The U.S. went all-or-nothing at the Hanoi summit a year ago and got … nothing. Talks deadlocked. Pyongyang dismissed the Republic of Korea as a factor, since Washington refused to relax sanctions to allow joint economic projects to proceed.

As the new year dawned Kim promised to unveil a new strategic weapon. Since then the Democratic People’s Republic of Korea said it plans to strengthen its nuclear deterrent. Short-range missile testing has accelerated. Plans for a long-range test or even a nuclear test as well may be afoot.

As the two-year anniversary approached, North Korea’s hardline foreign minister, Ri Son-gwon publicly doubted there was a good reason to maintain the relationship between the two leaders. He complained that since the Singapore summit “Even a slim ray of optimism for peace and prosperity on the Korean Peninsula has faded away into a dark nightmare.” In the last couple weeks, the North cut all communication channels with the South, shuttered the liaison office, called the ROK an enemy, and, more ominously, said it was turning to the military for the next step.

All of which suggests that Pyongyang plans on making a dramatic entrance into America’s presidential campaign.

So far, the administration appears ill-prepared in the extreme to deal with another Korea crisis. National Security Adviser Robert O’Brien said the North had “to give up their nuclear program” if “they want to have a great economy.” Kim has already decided against making that choice. As prospects for the future darkened, Washington promised unspecified flexibility, which offered nothing specific or of value that would be worth changing the DPRK’s approach.

First, Trump and presumptive Democratic Party presidential candidate Joe Biden should informally agree not to react to DPRK provocations during the campaign. The North wants to get attention. Which is the best reason not to give Pyongyang what it wants. Rewarding extreme behavior only guarantees a repeat in the future.

Second, U.S. policymakers should recognize that peace is better than war. Any American military attack would create a very high risk of triggering full-scale conflict. Doing so is not worth the risk. Depending on the DPRK’s nuclear capabilities and reach, hundreds of thousands or millions could die in any war. Washington’s essential objective should be to prevent, not trigger, such an attack.

Third, Washington should adopt a policy to reflect the fact that North Korea is a nuclear power. It possesses nuclear materials, has tested nuclear weapons, and has developed multiple means of delivery. This means the likelihood of genuine denuclearization is at best zero and probably quite a bit less.

The only nuclear power to give up its weapons was South Africa, and its circumstances were unique. Denuclearizing North Korea was never going to be easy. Alas, the Obama and Trump administrations confirmed the skepticism with which any government in Pyongyang should greet an American proposal. The former helped take out Muammar Khadafy after he yielded his missile and nuclear programs, while the latter tore up the agreement with Iran after the latter took steps to make future weapons development more difficult.

Fourth, while the next U.S. administration might formally maintain the fantasy of denuclearization, it should prepare an arms control program, with discrete proposals to limit and restrain the North’s advances in ways consistent with denuclearization, if Pyongyang ever demonstrates its willingness to move down that path.

Fifth, sanctions have value only as part of a serious diplomatic program with realistic off-ramps and serious carrots as well as sticks. The Trump administration’s approach of give us everything and then we will be nice to you, trust us!, is dead. Sanctions are especially unhelpful when the U.S. ignores the roadmap signaled by the other side. In the Singapore agreement, substantively thin though it was, Kim indicated his desire for establishing better bilateral relations and creating a regional peace regime. The U.S. has encouraged neither, instead preserving its counterproductive policy of complete isolation and maximum pressure.

Sixth, Washington should recognize that engagement is even more necessary for a threatening nuclear North Korea than a weak conventional one. The possibilities for miscommunication and misjudgment remain high yet the stakes are growing. The U.S. should push for better relations and more contact. The ban on travel to and from the North should be dropped. Official liaison offices should be established. Contacts should be regularized. Diplomatic discussions should be seen as good sense, not a reward.

Seventh, America should empower Seoul. The DPRK is an existential issue for South Korea. The former is relevant to America only because the U.S. has chosen to put itself at risk by placing military personnel within harm’s way. The North will not attack America unless the two are at war and defeat for the DPRK seems certain. So Washington should relax sanctions and allow the ROK to set policy and test approaches. The U.S. has failed. It is time for a new strategy.

Eighth, the administration should use the deadlock over the special measures agreement as the trigger for beginning to withdraw American military forces from the South. With more than 50 times the North’s GDP and twice its population, the ROK does not need conventional military support. The South should take over responsibility for its own security.

And contra common claims, the U.S. presence provides no “dual-use” advantages. No South Korean president is going to turn his or her country into a target by allowing American forces to operate from ROK soil against the People’s Republic of China in any contingency other than a Chinese attack on the South, which is plausible only if Seoul joined Washington in attacking the PRC. Nor would a U.S. army division have any serious value in such a war.

Once the election is over the winner should develop a serious diplomatic initiative that sets realistic objectives and offers the North significant benefits that would justify limiting nuclear and missile developments. The U.S. won’t know if Kim is prepared to say yes until it asks him.

We are approaching the 70th anniversary of the start of the Korean War. No one should want a repeat. In 2017 President Trump took America uncomfortably close to a Korean Armageddon before opening up diplomatic opportunities in 2018. This time the next president should skip the war scare and move straight to the peace initiative.