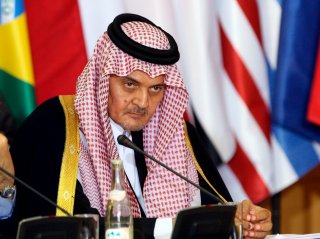 Saudi Arabia has expelled Lebanon’s ambassador, banned all imports from the country, and forbidden its citizens from traveling to Lebanon after a Lebanese minister criticized the Saudi-led military intervention in Yemen, according to the state-run Saudi Press Agency (SPA).

The gazette’s official announcement argued that the remarks by George Kordahi, Lebanon’s Information Minister, constituted a “damaging statement,” and fit into a broader pattern of “slanderous statements and distortions of facts” promoted by the Lebanese government.

Kordahi had suggested that the conflict in Yemen was primarily an aggressive war against the Houthi militants of northern Yemen, who he said were “defending themselves [...] against an external aggression.” He also described the war as “futile” and called for its immediate end.

The remarks were made before Kordahi, a former Lebanese television presenter and game show host, became Information Minister, and he quickly clarified that they represented his personal opinion rather than the position of the Lebanese government. However, he also described calls for his resignation as “blackmail” and indicated he would remain in his position.

Lebanese prime minister Najib Mikati issued a statement on Friday evening claiming that he “regretted” Saudi Arabia’s decision, calling on other Arab nations to “work and help to overcome this crisis.”

The Saudi statement also condemned Lebanon for failing to prevent drug smuggling, which it asserts is tied to Hezbollah, an Iran-linked militia and political party that the Saudi government, along with the European Union, regards as a terrorist group. Hezbollah has exerted significant influence over the Lebanese Ports Authority and is heavily involved in smuggling. A Lebanese judge’s investigation into the circumstances of the August 2020 ammonium nitrate explosion in the Beirut port has provoked protests from Hezbollah and its allies, leading to a daylight gun battle in the city’s downtown area several weeks ago.

Hezbollah, which supports the Houthis, has praised Kordahi’s remarks.

Riyadh ultimately stopped short of expelling Lebanese citizens from Saudi Arabia, claiming that it “considers [them] part of the fabric and bond that unites the Saudi people and their Arab brothers residing in the Kingdom, and does not regard what was issued by the Lebanese authorities [as] express[ing] the stances of the dearly [sic] Lebanese community residing in the Kingdom.”

The SPA later announced that Bahrain, a small island nation off the Saudi coast that has usually followed Riyadh’s line in international affairs, had followed suit and expelled its own Lebanese ambassador.