Hezbollah Has 100,000 “Trained Fighters,” According to Leader 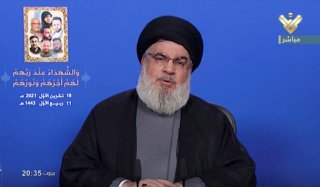 Hassan Nasrallah, the leader of Lebanon’s Hezbollah militant group-turned-political party, claimed that the organization had 100,000 active militiamen—a statistic that, if true, would make the group larger than the Lebanese Army itself.

Nasrallah made the announcement during a speech following the deaths of seven Lebanese in a gun battle in Beirut, the nation’s tumultuous capital. The confrontation is thought to have erupted because of disagreements over the ongoing investigation of the August 2020 ammonium nitrate explosion that leveled the city’s port.

Lebanon’s various factions, which have feuded for power since the end of the country’s fifteen-year civil war from 1975 to 1990, have at times accused each other of responsibility for the blast, leading to clashes. The motivation behind Nasrallah’s speech appears to have been calculated as a threat to the country’s other factions, implicitly warning them to avoid confronting Hezbollah.

In the same speech, Nasrallah attacked Samir Geagea, the leader of the right-wing Christian “Lebanese Forces” group, accusing him of fomenting divisions and attempting to return the country to civil war. Geagea is a close ally of Saudi Arabia, which opposes Hezbollah’s patron, Iran.

Hezbollah is one of the most powerful non-state actors in the Middle East. The group emerged among Lebanon’s disaffected Shi’as during the civil war, and, with Iranian support, grew to become the largest and most powerful militia in the country. At the end of the war, it was the only armed group that refused to abandon violence, and it continued to launch terror attacks against Israel, leading to a 2006 military confrontation in which Israel invaded Lebanon but failed to destroy the group. The group has ongoing ties to Iran, and many of its members gained military experience fighting for Syrian dictator Bashar al-Assad in neighboring Syria’s civil war.

Lebanon is one of the most multi-ethnic and multi-religious regions in the Middle East, home to Sunni and Shi’a Muslims, Maronite and Orthodox Christians, and Druze, an unusual Abrahamic faith broadly grouped with Muslims but considered heretical by most mainstream Islamic thinkers. The country’s government, which has responsibilities divided along sectarian lines, is broadly considered corrupt and ineffective and has been the subject of mass protests since October 2019.

Nasrallah has led Hezbollah since his predecessor, Abbas al-Moussawi, was assassinated by Israeli agents in 1992.