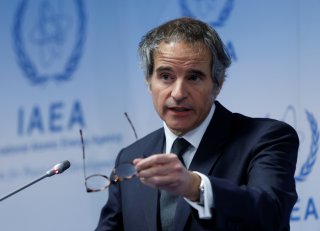 Iran has cut off camera access to several of its nuclear enrichment sites, according to the International Atomic Energy Agency (IAEA), marking a significant escalation in the country’s noncompliance with international nuclear safeguards.

The announcement of Iran’s camera blackouts came from Rafael Grossi, the IAEA’s director general, at an impromptu press conference in Vienna, where Iran is currently engaged in multilateral negotiations with the “P5+1” nations over a return to the nuclear agreement signed between the seven parties in 2015. The director general described the cameras’ removal as a “serious challenge” to the IAEA’s attempts to monitor Iran’s nuclear program and suggested that after three to four weeks, it would no longer be able to accurately determine any information about the program, delivering a “fatal blow” to ongoing negotiation efforts.

“When we lose this, then it’s anybody’s guess” what happens next, Grossi added.

Iran’s decision to revoke the IAEA’s camera access—a critical safeguard ensuring it continues to enrich uranium within acceptable limits and does not install additional centrifuges at its facilities—came after the international organization passed a resolution criticizing Iran’s nuclear program and accusing Tehran of operating undeclared nuclear sites at which traces of uranium were found. The resolution was passed by the group’s Board of Governors, with thirty out of the thirty-five nations on the board voting in favor; Russia and China were opposed, while three nations abstained or were absent during voting.

The removal of IAEA cameras also comes after an Iranian decision to install additional “cascades,” or blocks of centrifuges operating in tandem, at the Natanz facility. The new centrifuges are thought to be far more efficient than the centrifuges Iran was granted access to under the terms of the JCPOA. The IAEA had previously accused Tehran of installing new centrifuges at Fordo, a nuclear enrichment facility in central Iran.