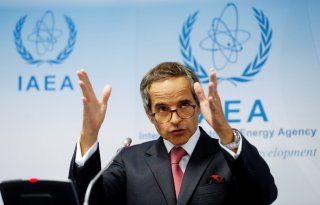 The International Atomic Energy Agency’s (IAEA) director, Rafael Grossi, announced that he was “extremely concerned” about Iran’s refusal to disclose its full nuclear activity in recent weeks. The announcement comes as the months-long nuclear negotiations between the “P5+1” powers and Iran have stalled in Vienna.

To revive the talks, Enrique Mora, the European Union’s representative at the Vienna talks, is scheduled to visit Tehran and meet with Iranian officials to discuss ways to break the deadlock.

Grossi told the European Parliament on Tuesday that the IAEA had been “trying to clarify a number of still open matters with Iran”—so far without success.

“I am referring to the fact that we, in the last few months, were able to identify traces of enriched uranium in places that had never been declared by Iran as places where any activity was taking place,” Grossi said.

“The situation does not look very good. Iran … has not been forthcoming in the kind of information we need from them. … We are extremely concerned about this,” he added.

Although the negotiations in Vienna were seemingly within inches of a resolution weeks ago, they have since stalled over the issue of Iran’s Islamic Revolutionary Guards Corps, which was designated a foreign terrorist organization (FTO) by the Trump administration in April 2019. Tehran has insisted that the designation, which restricts the IRGC’s ability to do business abroad, be removed, while lawmakers on Capitol Hill have pressured Biden not to remove the designation.

The Vienna negotiations intend to restore the basic structure of the Joint Comprehensive Plan of Action, the agreement negotiated between the administrations of President Barack Obama and Iranian president Hassan Rouhani in 2015. President Trump withdrew from the JCPOA in 2018 and re-imposed sanctions on Iran, prompting Tehran to restart its nuclear enrichment program. Iran’s “breakout time”—the amount of time it would take to develop a nuclear weapon if it did not attempt to hide doing so—was estimated by Secretary of State Antony Blinken to be “a few weeks” in April.

At the same time, IAEA officials have held out hope for a deal, and Grossi underlined that the Vienna negotiations “should be at the top of our preoccupations, in spite of the drama that is unfolding in Ukraine.”

He added that while the talks were “at a sort of pause,” the IAEA was “still hopeful that some agreement is going to be reached within a reasonable timeframe.”