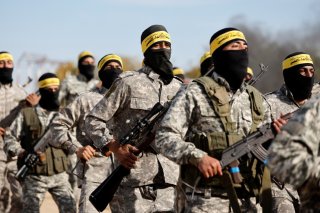 Seventeen years ago this week, Israel withdrew from Gaza and dismantled the seventeen settlements that existed there. To demonstrate that it was prepared to go ahead on the West Bank as well, Israel dismantled four settlements there, too. Israel’s preconditions for further progress were straightforward: a demonstration of the Palestinians’ ability to govern responsibly and end terrorism.

The Palestinian response was similarly straightforward. Hamas seized control in Gaza from the Palestinian Authority (PA), established a radical theocracy, and together with Palestinian Islamic Jihad (PIJ), fired tens of thousands of rockets at Israel’s civilian population, over 1,100 in the recent round alone. The PA, in the West Bank, became a corrupt, if feckless, dictatorship.

No criticism of Israel’s policies toward the Palestinians can excuse, or explain away, the intentional and indiscriminate targeting of civilians: that is terrorism and murder. The fact that some Palestinian civilians are unavoidably killed when Israel responds is heartbreaking, but there is no moral equivalence. Israel’s right to defend its citizens is inviolate.

There is no purely military solution to the problem that Gaza proposes. Tragically, there may not be a political one either.

Despite decades of efforts, Israel’s ability to prevent and suppress rocket fire is still limited. Fortunately, Israel’s Iron Dome defensive system has proven extraordinarily effective and its casualties, since the system was first deployed in 2012, have been comparatively small. Had it not been for Iron Dome, Israel’s casualties would have been severe, and it would have been forced to launch a major ground operation. As it is, disruption to the economy and national life is significant.

The only way to truly cut Hamas and PIJ’s large rocket arsenals down to size, and Hezbollah’s mammoth one, is through a ground operation. Israel would have to occupy all of Gaza, or Lebanon, and go house-to-house for months in a bloody battle to root out the rockets. Once Israel withdrew, however, Iran would rapidly replenish the arsenal and the period of calm gained—at the price of hundreds of Israeli casualties (and far more Gazans or Lebanese)—would likely be short-lived. Some suggest that Israel topple Hamas or Hezbollah, but they would probably just rapidly reconstitute or be replaced by something even worse, e.g., ISIS.

For these reasons, every Israeli government in recent decades, regardless of political complexion, has refrained from doing so. Israel may ultimately have no choice, but at least for now, the remedy exceeds the threat.

Unsurprisingly, the repeated rounds of conflict in Gaza, following the withdrawl, have convinced many in Israel that it is a proven failure. If so judged, this would certainly cast a pall over recommendations that Israel undertake a far riskier withdrawal from the West Bank; indeed, over the entire concept of a two-state solution. The West Bank literally abuts central Israel, where it is just 8.7 miles wide, and is in easy rocket and artillery range from Tel Aviv and Beersheba, even small-arms range from Jerusalem.

On the one hand, Israel was unable to prevent Hamas from firing thousands of rockets even before the withdrawal, when it was in complete control of Gaza. In that sense, the withdrawal has not fundamentally changed the situation, even if the repeated rounds have exacerbated it. On a more positive note, Israel no longer occupies 2 million people. Moreover, had Israel not withdrawn, more than half of the population under its control today would not have been Jewish. As such, the withdrawal was a critical step towards full separation from the Palestinians and a future two-state solution.

Conversely, detractors correctly assert that Israel’s post-withdrawal experience has greatly dampened prospects for this. Israel simply cannot allow the West Bank to become another rocket launching pad, and widespread public recognition of this has greatly undermined support for further progress with the Palestinians. Whether truly effective security arrangements can be devised is debatable—and without them, no one in Israel, Left or Right, will withdraw.

If Israel cannot ignore withdrawal’s disappointing consequences, it also cannot allow them to dictate future policy. For all of the greater near-term certainty in the current situation, it, too, poses grave risks. The absence of a political horizon feeds into Palestinian despair, increases the likelihood of a further armed uprising in the West Bank—or at least a surge in terrorism—and ultimately endangers Israel’s national character.

For decades, various overly optimistic analysts have predicted Hamas’s eventual moderation and pursuit of a more diplomatic course, as some terrorist organizations have done in the past. In practice, Hamas’ fundamental enmity toward Israel remains unchanged. However, this fact does not preclude Israeli from pursuing peace negotiations with the PA or taking measures to improve the quality of life in Gaza. Hamas, however, has proven to be an only partial partner even for such limited measures, repeatedly launching rockets at Israel just as it was opening the border. This seemingly self-defeating behavior only appears inexplicable if one refuses to accept Hamas for what it is, a jihadi organization bent on Israel’s destruction.

The situation in Gaza deteriorated so severely in recent years, however, that even Hamas was forced to support some economic reconstruction and growth measures. As the de facto government, Hamas seeks to ensure that the public does not become so disaffected that it rises up against it, but also not so satisfied with the new status quo that it ceases to support ongoing operations against Israel. In practice, the periods of calm between the rounds have grown shorter, not longer, despite Israel’s repeated attempts to promote economic growth.

Palestinian rejectionism has, unfortunately, not been limited to Hamas. PA presidents, Yasser Arafat and Mahmoud Abbas, both rejected dramatic proposals for peace, which would have given the Palestinians a state on essentially 100 percent of the territory, a capital in East Jerusalem, and a limited return of refugees, years ago. One cannot ignore the truly wrenching question, whether the Palestinians are prepared to accept any deal that requires that they live in peace alongside Israel.

Israel heads to the polls again in November and a new centrist government is not unimaginable. The battle to succeed Abbas is also underway and, though less likely, a more moderate Palestinian leadership, too, may emerge. Such are the faint glimmers of hope in the Mideast.

Chuck Freilich is a former deputy national security adviser in Israel. He is a senior fellow at The Miryam Institute and the author of “Israeli National Security: A New Strategy for an Era of Change” and the forthcoming “Israel and the Cyber Threat: How the Startup Nation Became a Global Superpower.” Twitter: @chuck_freilich