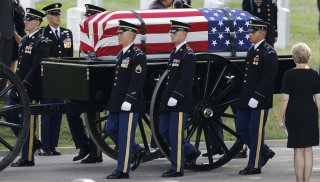 Taliban infiltrators and rogue soldiers have killed hundreds of Afghan troops and dozens of U.S. troops over the past few years. U.S. forces are supposed to leave Afghanistan soon under a U.S.-Taliban peace deal signed on February 29, but the increasing number of insider attacks bodes badly for the future of the U.S.-backed Afghan government.

Gunmen dressed as Afghan soldiers launched a brutal attack on a maternity hospital in Kabul last week, killing over twenty women and children in a targeted assault against the Shi’a Muslim-majority Hazara community.

U.S. investigators found that 2019 was the deadliest year on record for insider attacks within the Afghan military, with 172 killed and 85 wounded, according to a report released on Tuesday by the Lead Inspector General.

Insider attacks have already killed 48 Afghan troops in the first three months of 2020 alone. The report was written before the Kabul hospital attack.

None of the attacks this year targeted U.S. forces exclusively, but a gunman wearing an Afghan military uniform killed two U.S. troops and an Afghan soldier in Nangarhar on February 11.

Insider attacks against U.S. forces peaked in 2012, killing nearly 150 troops. These attacks declined as U.S. troops began to reduce their presence in Afghanistan.

Instead, Afghan-on-Afghan attacks began to sharply increase in 2014, and continue to rise despite policy changes made by the Afghan Ministry of Defense in 2017.

This violence between Afghans does not threaten the U.S.-Taliban peace agreement, as U.S. officials have made it clear that the agreement is only concerned with Taliban attacks on foreign forces.

But the Lead Inspector General also warned that splits within the Taliban and other Islamist rebels could unravel the peace process.

The watchdog wrote that “the circumstances could motivate other terrorist groups operating in Afghanistan—especially those who haven’t seen the peace process as in their interest—to further the conflict and upend the deal,” and U.S. officials have “expressed concern about groups attempting to disrupt the agreement.”

Most worrying was the presence of ISIS-K, the Central Asian branch of the Islamic State, which currently has 300 to 2,500 fighters in Afghanistan and opposes the peace deal.

U.S. forces and Afghan authorities disagree on who carried out last week’s maternity hospital massacre, with the United States blaming ISIS-K but the Afghan government pointing the finger at the Taliban. Neither group has claimed the attack.

But the peace agreement has surprising backers.

Al Qaeda was “was concerned about the peace talks but continued to maintain a close relationship with the Taliban,” the Defense Intelligence Agency told the Lead Inspector General.

The U.S.-Taliban deal requires the Taliban to block Al Qaeda and other terrorist groups from using Afghan soil to plan operations like the September 11, 2001 attacks on New York and Washington that prompted the U.S. invasion of Afghanistan.

The Department of State has established a “monitoring and verification mechanism” to verify the Taliban’s commitment to counterterrorism, but the details of the monitor are classified.

“We believe that ISIS and the Taliban are mortal enemies, and in the war against ISIS, Taliban have played an important role,” U.S. Special Representative Zalmay Khalilzad told reporters on Friday. “We urge Taliban and government not to play the ISIS game, but to cooperate against it.  And the appropriate response is to accelerate the peace process, not to delay it because of what ISIS has done.”