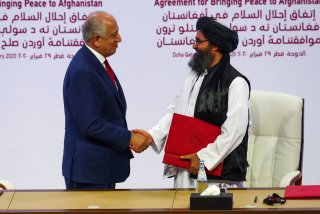 U.S. Special Representative Zalmay Khalilzad will travel to Qatar this week and “meet with Taliban representatives to press for full implementation of the U.S.-Taliban agreement,” the State Department said on Wednesday.

Khalilzad’s trip comes on the heels of a U.S. Special Inspector General for Afghanistan Reconstruction (SIGAR) report that revealed that the Taliban have actually stepped up their attacks on the U.S.-backed government of Afghanistan after the Trump administration signed a peace deal with the Islamist rebels in February 2020.

The U.S. government watchdog report—and Khalidzad’s trip—raise questions about whether the agreement can hold Afghanistan together after U.S. troops leave. But the peace process seems to have at least prevented attacks against the U.S.-led international coalition in Afghanistan, the main condition of the peace deal that calls for U.S. troops to withdraw from the Central Asian nation.

Taliban fighters did not attack Coalition forces in the month of March, according to SIGAR’s latest quarterly report, which was published last week.

The coalition had refused to tell SIGAR the actual number of attacks, citing the “ongoing political negotiations between the U.S. and the Taliban.” This was the first time since 2008 that the U.S. government did not publish detailed statistics on the progress of the war effort.

Instead, a coalition representative simply told SIGAR that the Taliban “refrained from attacks against Coalition forces” but “increased attacks against [Afghan security forces] to levels above seasonal norms” in March.

This violence between Afghan forces will not prevent U.S. troops from withdrawing from Afghanistan, as “[t]he U.S.-Taliban agreement does not prohibit all Taliban attacks against Afghan security forces, nor does it preclude the United States from acting in defense of Afghan forces,” a State Department representative told SIGAR.

Congress created SIGAR in 2008 to oversee U.S. taxpayer dollars spent during the invasion and occupation of Afghanistan. The United States has spent $136.97 billion establishing a new government in Afghanistan after toppling the old Taliban-led regime in 2002, according to SIGAR.

The watchdog group has been sharply critical of the U.S.-led war effort at times, both publicly and privately. It made headlines in December 2019 when the Washington Post published a trove of previously-unseen SIGAR interviews with high-level officials slamming the failures of the war effort.

The Taliban has been fighting for control of Afghanistan since the fall of the Soviet-backed government in the 1990s.

The latest U.S.-Taliban agreement requires the Taliban to cease attacks on coalition forces, to negotiate with the Afghan government, and “to prevent any group or individual, including [Al Qaeda], from using the soil of Afghanistan to threaten the security of the United States and its allies.”