Afghanistan Has a New Problem Ahead: Coronavirus 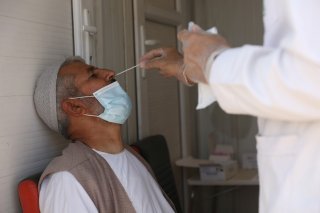 As it approaches its second-year anniversary, the COVID-19 virus has led to millions of deaths and trillions of dollars in economic losses around the world. In Afghanistan, however, the virus has long been the least of the country’s worries; because its population is overwhelmingly young, and young people are typically less vulnerable to COVID-19, its per death rate has been somewhat lower than in other nations.  According to the country’s Ministry of Public Health and the World Health Organization (WHO), there have been roughly 7,100 COVID-related deaths since the onset of the pandemic.

However, Afghanistan has pre-existing challenges that have raised the severity of the pandemic. Its healthcare system is poorly funded and equipped, and it has one of the lowest vaccination rates in the world. It has also had difficulty importing COVID-related medical supplies, including PCR tests, according to Dr. Wahid Majrooh, the country’s acting health minister.

Majrooh, who has held the Ministry of Public Health since 2015, is one of a handful of high-level Afghan officials who remained in Kabul after the Taliban seized the city on August 15. In comments to Insider, he emphasized that most of Afghanistan’s COVID-related medical facilities, including testing centers, had been closed after the evacuation of U.S. forces.

Majrooh revealed that, of around 300 COVID-19 tests conducted by the government on September 7, more than 100 were positive. He also expressed concern about the country’s inability to track new cases, and the logistic difficulties in receiving new shipments of COVID vaccines, which typically must be kept in cold storage until use—cold storage that powerless Afghan hospitals no longer have.

UN officials have warned that the conflict’s end would force roughly ninety percent of Afghanistan’s health facilities to close down, as international organizations have cut or ended their funding out of fears that the Taliban could use it for malign purposes.

However, Majrooh warned that halting aid to Afghanistan would have far more urgent consequences on the ground, leading the country’s health system to essentially shut down: “When we hear messages from the World Bank or the Afghanistan Reconstruction Trust Fund donors—whether they say that they have put our funds on hold, or they've frozen them—what that means to me is 3700 health facilities will collapse. That the health of 35 million people will collapse.”