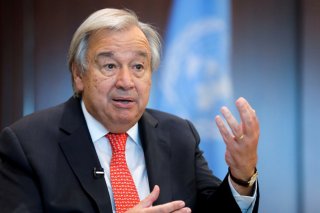 The UN Security Council unanimously authorized a six-month extension of the United Nations Assistance Mission in Afghanistan (UNAMA) on Friday, in recognition of the complicated situation that the Taliban’s capture of the country had created for the group.

The council asked UN Secretary-General Antonio Guterres to provide a follow-up report by the end of January 2022, describing his “strategic and operational recommendations” for the future of the group’s operations “in light of recent political, security, and social developments.”

The request submitted to Guterres indicated that the UN should prioritize “the establishment of an inclusive and representative government” in Afghanistan, including “full, equal, and meaningful participation of women” and respect for human rights.

However, the Taliban’s newly established interim government does not appear to reflect the same priorities; it is composed entirely of men and excludes many of the nation’s ethnic minorities.

Prior to the extension, UNAMA’s annual mandate was slated to expire on Friday.

The standard practice for UN missions is to extend them for a full year, the length of time for which UNAMA has been extended in previous years. However, major uncertainties with regard to the situation in Afghanistan have drawn the future of the UN mission into question.

Despite this, the text on Friday insisted that the UN would still play an “important role” in the country’s future.

Significantly, the Taliban did not object to the mission’s extension. On previous occasions, the group has stated its intention to become a member of the international community, including by joining the UN and interacting peacefully with other states. However, experts have cautioned that the group is unlikely to comply with international human rights law, which typically forbids discrimination against women—a major feature of Taliban rule.

In welcoming the UN’s decision to remain, Louis Charbonneau, United Nations director at Human Rights Watch, argued that there was “little evidence to suggest the Taliban will comply with international human rights law, especially the rights of women and girls.” For this reason, Charbonneau argued, “UNAMA will need to regularly and publicly report on abuses while helping meet the humanitarian needs of the Afghan people.”

Human Rights Watch has pushed for the UN to remain in Afghanistan indefinitely, arguing that abuses would go undetected if it decided to leave and that it could help the humanitarian situation in Afghanistan by remaining, even if under the auspices of Taliban rule. Other international organizations, such as the Red Cross, have also decided to remain.