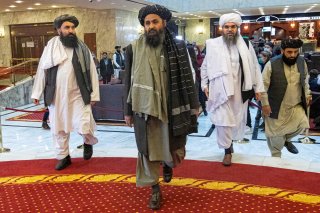 Three weeks after their lightning-fast capture of Afghanistan—culminating in the group’s well-publicized takeover of Kabul on August 15—the Taliban has announced the country’s interim government. While the group’s deputy prime minister, Mullah Abdul Ghani Baradar, promised to form an inclusive government, the new government is overwhelmingly composed of Taliban leaders and so far lacks any women.

However, the lineup announced by Taliban leaders included several unexpected changes, the largest of which concerned Baradar himself. Baradar, a senior commander within the group and a personal friend of its former leader, Mullah Mohammad Omar, Baradar was widely assumed to become Afghanistan’s next head of government, given his key role in the talk between the Taliban and the United States. Instead, that position is being filled by Mullah Mohammad Hassan Akhund, who has taken the role of interim prime minister beneath its amir al-mu’minin, or “commander of the faithful,” Hibatullah Akhundzada.

Akhund will preside over the Taliban’s government in Kabul for the first time since the group’s takeover, and the new administration is widely expected to set the tone for that follows.

Mullah Akhund originates from Kandahar, a major city in the country’s south that served as the birthplace of the Taliban movement during the 1990s. During that time, Akhund had a varied political career under the first iteration of the Taliban, serving a stint as Governor of Kandahar and maintaining a close relationship to other leaders, including Mullah Omar—who, according to a UN sanctions report, viewed Akhund as a “close associate and political adviser.” He also served briefly as the Taliban’s foreign minister during this era, as well as Afghanistan’s deputy leader, behind Omar.

In the years since Omar’s death and the group’s initial expulsion from power, Akhund served as the leader of the Rahbari Shura, the main decision-making body of the Taliban, for twenty years, developing a close relationship with Akhundzada.

Akhund is known to have been short-tempered in the past. In 1998, the then-foreign minister physically assaulted a UN Development Programme officer and tried to throw a table at another, resulting in the UN’s withdrawal from Kandahar—and Akhund’s replacement as foreign minister.

Akhund is primarily viewed as a religious, rather than a military, leader. The leader has written numerous Islamic texts in the past. Within the Taliban’s religious hierarchy, he has also been regarded as a compromise candidate for a leader who satisfies both the group’s moderate and hard-line factions.