Assad Has Won and America Must Go 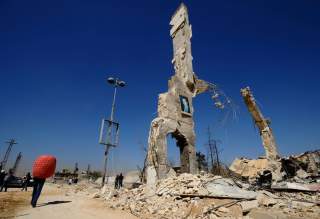 Syrian government forces and their allies stand ready to roll into the province of Idlib and extinguish the last major rebel stronghold in the country. Russian air attacks pummeled Idlib in early September. Today’s announcement of a Russo-Turkish agreement for a buffer zone in Idlib appears to have postponed a full-scale attack on the province, but it is likely to be only a temporary reprieve. The Syrian civil war is in its endgame.

Yet at this late hour, holding few cards, the United States has doubled down on its Syrian intervention. Why?

America’s Syria policy is now in dire straits. On September 3 President Trump made a typical Twitter threat, warning Bashar al-Assad not to “recklessly attack Idlib Province.” This bluster was paired with a far more serious announcement. The administration’s newly-appointed “representative for Syria engagement,” retired diplomat James Jeffrey, told reporters that the United States had redefined its Syria goals to include the withdrawal of all Iranians and Iranian proxy forces from Syria and the “establishment of a stable, non-threatening government acceptable to all Syrians and the international community.” Jeffrey added: “That means we are not in a hurry.”

In March, President Donald Trump proclaimed, “We’re coming out of Syria, like, very soon.” So much for that.

There is little use in fully discussing the illegality of further American involvement in Syria. The post–9/11 Authorization for the Use of Military Force was stretched to provide a legal fig leaf for the counter-ISIS campaign in 2014. Employing it to justify an anti-Assad and anti-Iran intervention is untenable. A reassertion of congressional prerogatives is not something the Trump administration has to worry about, however. With a few notable exceptions, most American legislators are too timorous take a firm stand against any war. Some don’t even know where our troops are.

The inconsistencies in U.S. policy in Syria are glaring. Trump has staked much of his reputation on rapprochement with Russia, domestic political consequences be damned, but he now threatens to confront Russian forces in a country where no vital U.S. national interests are at stake. America is also distancing itself from Islamist Turkey, an increasingly problematic North Atlantic Treaty Organization member. Meanwhile, our Israeli and Kurdish friends both appear to be accepting future coexistence with the Assad regime, regardless of what we say. Israeli prime minister Benjamin Netanyahu has made his peace with Assad remaining in power. Syria’s Kurds, the main force behind the U.S.-supported Syrian Democratic Forces, are holding talks with Assad and have already made local accommodations with Syrian government forces. Alone and empty-handed, what do we think we can accomplish in Syria?

We should also remind ourselves exactly who Assad’s juggernaut is going to roll over, sooner or later. The rebel force in Idlib is not composed of secular, pro-western Thomas Jeffersons-in-waiting. The vast majority of those men are dead or on benefits in Bavaria. The rebels in Idlib are primarily Salafist jihadists, ideological soulmates of Al Qaeda, if not actual franchisees. Transferred to Idlib after surrenders and local deals in other rebel pockets, the remaining Syrian insurgent groups are filled with foreign fighters and zealots who are unlikely to be reconciled to Assad’s regime. Up to ten thousand fighters in Idlib have links to Al Qaeda. Some of Idlib’s defenders probably took a few moments last week to celebrate the anniversary of 9/11, if they could find the time in between stacking sandbags and boring murder holes.

In 2016, Trump promised an end to “intervention and chaos.” While facts on the ground appear to have tempered the president’s bellicosity in North Korea, the Middle East has had no such luck. Instead, Iran has become the administration’s abiding obsession, and more intervention and chaos are the likely results.

Tweets aside, the United States is unlikely actually to fight to stop an eventual Idlib offensive. The Turks might—they control twelve "observation posts" (more like company-sized battle positions) in Idlib and do not want hundreds of thousands of new Syrian refugees streaming toward their border. The Turkish positions were hurriedly reinforced with tanks and artillery last week.

A Russian-Turkish collision in Idlib is still possible despite today’s news. More likely is a piecemeal reconquest of the province, which is twice as big as the area of southwest Syria that government troops retook earlier this year. A limited offensive would allow Syrian forces to regain full control of the important M5 highway while minimizing military and political costs. Past deconfliction zones in Homs, Ghouta, Daraa, and Quneitra have all been reconquered despite Russian pledges to the contrary.

Regardless, nothing in Syria is worth a confrontation between American and Russian forces. We have dodged war with Russia in Syria before. We may not remain so lucky if we insist on staying.

Assad is a butcher and a client of two of our foes. He is also the victor in the Syrian civil war. America should acknowledge the obvious.

Image: A picture of Syria's President Bashar al-Assad is displayed on a damaged structure at the entrance of al-Dukhaneya neighbourhood near Damascus, as civilians carry their belongings recovered from their homes after soldiers loyal to Syria's President Bashar al-Assad regained control of the area from rebel fighters October 7, 2014. REUTERS/Omar Sanadiki (SYRIA - Tags: POLITICS CIVIL UNREST CONFLICT TPX IMAGES OF THE DAY)