Iran, Not North Korea, Is This Administration’s Foreign Policy 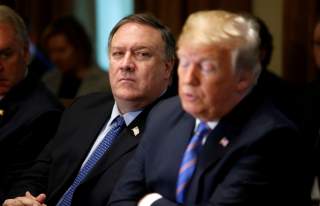 Mike Pompeo wants his department to get its swagger back. And with his new Iran Action Group, he has the prime opportunity to keep on crushing it.

To hear Brian Hook—head of the Action Group—tell it, as I did late last month in Washington at the Foundation for the Defense of Democracies national security summit, Iran is getting top billing in this administration.

“It’s important to begin by understanding that the Iranian regime is the last revolutionary regime on earth,” Hook told a packed crowd at the St. Regis hotel, just a few blocks away from the White House. “And the full achievement of the revolution at home and abroad is the regime’s ultimate goal.”

Indeed, smothered beneath the sky-on-fire political atmosphere in Washington and the smog of concern over North Korea and Russia, is the Trump administration’s foreign policy on Iran. Often overlooked—John Kerry’s hand-wringing, pre-presidential tour aside—it is the theater where the administration has the most leeway and leverage.

And it is using it.

Russia is toxic and North Korea is unsolvable, but on Iran, the administration has convulsed U.S. policy and upended the reality on the ground from where it was only two years ago. With the exit of Barack Obama, the liberal interventionist establishment is mostly going along with a harder line as well (protestations about JCPOA secession aside).

As the Assad regime plots mass murder, and final victory, in Idilb, the Brookings Institution is calling on the United States to link Damascus with its benefactor. “Threatening and, if necessary, conducting limited reprisal air strikes against Syrian aerial assets, in retaliation for any future regime barrel bombing, particularly around Idlib. Washington should adopt a similar strategy toward Iran should its proxies attempt attacks against the United States or its allies,” counsels the think tank. Recep Tayyip Erdogan of Turkey, sometimes bedeviled by this administration, sees an opening as well. Ankara de facto controls much of the territory north of the city soon to be besieged. “Our partners in the Astana process, Russia and Iran, are likewise responsible for stopping this humanitarian disaster,” Erdogan wrote Monday in the Wall Street Journal. He all but called on Washington to act against Iran’s proxy, chemicals weapons use or not: “It is cru­cial for the U.S., which has con­cen­trated on chem­i­cal at­tacks, to re­ject its ar­bi­trary hi­er­ar­chy of death.” Not mincing words, he portrayed the coming days and weeks as the terminus of the Syria policy calculus: “Idlib is the last exit before the toll.”

Addressing FDD is fast becoming a well-charted path for the administration elite. It was at this same summit last year that I first heard murmurings that Pompeo, then CIA director, was on his way to becoming the nation’s top diplomat. H. R. McMaster, then national security advisor, was greeted warmly but carried himself like a marked man.

Both were given a hero’s welcome; both transitions came to pass.

“The nuclear deal was premised on the hope that Iran would moderate over time.  That it would catalyze Iran in to abiding by international norms,” Hook said at this year’s event. “But Iran still applies—supplies the Houthis with missiles fired at Riyadh, Iran still supplies and supports Hamas’ attacks on Israel.  And Iran still recruits Afghan, Iraqi and Pakistani youth to fight and then die in Syria.”

As I’ve reported, FDD was instrumental last year behind the scenes with this White House in crafting an Iran deal policy that eyed either a “fix” or a exit. The New York Times reported that FDD CEO Mark Dubowitz has helped write some of the language Hook has used at the White House.

“The revolutionary worldview means that the regime cannot tolerate any ideas coursing through the veins of Iranian society that would threaten them,” Hook elaborated. And FDD fellow Reuel Marc Gerecht has authored probably the most comprehensive compendium to date in favor of greater American confrontation with the clerical regime in Iran. In addition to Hook, the U.S. Ambassador to the United Nations, Nikki Haley, addressed the late August gathering. On the issue of Iranian sponsorship of groups that use human shields, Haley summoned Bushian language: “Anyone that works with Iran is just as guilty, because they know they’re doing this.” She was unequivocal: “I never thought the Iran deal could be fixed.”

The White House won’t admit it, but its hands are tied on North Korea, as any administration’s would have been. “There’s no military solution, forget it. Until somebody solves the part of the equation that shows me that ten million people in Seoul don’t die in the first 30 minutes from conventional weapons, I don’t know what you’re talking about, there’s no military solution here, they got us,” then-Chief Strategist Steve Bannon told The American Prospect on his way out of the White House last year. “He was dealt a terrible hand of cards,” Bannon told the National Interest in June.

Haley sees her job as helping to prevent the Iranian situation from ever progressing to the nadir of North Korea. This is where this administration has the most leverage. When Donald Trump chair the U.N. Security Council later this month, the topic will be Iran, not North Korea. He’ll preside the day after Iranian President Hassan Rouhani addresses the General Assembly. The stakes are sky-high. “I strongly believed it was wrong,” Haley said at FDD on the deal. “You have to look at Iran, or at least how I looked at it, as the next North Korea.  If you continue to fund this and they continue to do these bad acts and no one holds them accountable, we one day are going to be talking about Iran the same way we talk about North Korea.

Restrainers have every reason to be concerned: on Iran, and more immediately, in Syria. Once more attacking Assad would be an “exceedingly bad decision,” Retired Lt. Col. Daniel L. Davis of Defense Priorities, said in text message Tuesday. “We gain nothing by this.”

“Keep in mind [that the Organisation for the Prohibition of Chemical Weapons] found no evidence for the use of chemical weapons after the last strike,” Retired Col. Douglas Macgregor explains.“Nikki Haley, who is insisting that Damascus is poised to use chemical weapons, would have made a great U.N. Ambassador for Hillary Clinton, but not Donald Trump.” I’ve reported that Macgregor has been considered for national security advisor before, and could be in the mix again down the line. Macgregor has told me he doesn’t think the real long-term threat to the United States in the Middle East is Iran; it’s Turkey and Erdogan.

But for now, Iran hawks, including those in Europe and the United States who work with the resistance inside the country, are in the driver’s seat. “There is an uprising in the country, and it’s been going on for months, and it will continue,” Alireza Jafarzadeh of the National Council of Resistance of Iran (NCRI) told me at the offices in Washington Monday.