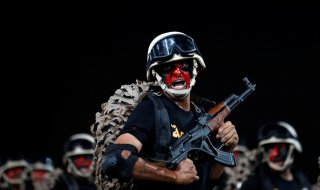 The continued nature of a U.S. interventionist foreign policy doctrine toward the Middle East and North Africa (MENA) region undermines American values and credibility within the global community. This doctrine is driven by a military interventionist mindset within the U.S. foreign policy community, which has reached a zenith through the Trump administration’s dumping of billions of dollars’ worth of advanced weaponry into the arms of MENA autocrats. However, with a new Biden administration taking the helm in a little more than one month, an opportunity exists for a new U.S. foreign policy toward the MENA region. A Biden administration will need to employ diplomacy and human rights advocacy in order to reverse U.S. hypocrisy abroad.

The CATO Institute’s 2020 Arms Sale Risk Index best reflects the foreign policy dilemma facing the United States. The index, released in October, estimated that the Trump administration brokered arms deals totaling $85.1 billion in 2019 worldwide—a record even for an administration known for advancing such practices. Further, the report reflects billions of dollars in U.S. weapons sales to autocratic states that fall within the top 25 percent of the report’s highest risk scores, including Egypt, Saudi Arabia, and Iraq—all with a higher risk profile than Iran.

Yet arms sales only constitute a fraction of the militarized U.S. foreign policy approach. U.S. military engagements paint a picture of regular conflict in places like Iraq, where the beginning of 2020 witnessed a targeted assassination of an Iranian general in a third, supposedly allied, country. This led to a major escalation of tensions between the United States, Iran, and Iraq, as well as a U.S. troop influx in Iraq and Saudi Arabia from the administration that claimed to be ending “forever wars.”

Adding insult to injury, continued and expanded weapons sales to Saudi Arabia and the UAE have tied the United States to an increasingly expansive list of potential war crimes in Yemen, just as new reports have revealed significant civilian harm due to U.S. military interventions in the country against violent extremist groups in 2017.

Collectively, these foreign policy failures reflect a clear and obvious need for a new approach to the MENA region. Centering diplomacy and human rights within a new approach will have to be the focus of the Biden administration. Efforts in diplomacy and human rights can rebuild trust in the region while simultaneously upholding American values abroad. This would need to encompass coalition-building and military restraint as the fragility of MENA states is called into question.

Coalition-building and a renewed sense of multilateralism is particularly important to the success of a “Diplomacy First” foreign policy. As I have written in the past, a unilateral foreign policy toward the MENA region has resulted in U.S. alienation abroad. With this in mind, the Biden administration will require a long list of allies willing to take collective action against an aggressor, as was the case with the Joint Comprehensive Plan of Action (JCPOA) and Iran in 2015.

In the case of the JCPOA, a coalition of like-minded states banded together to implement targeted sanctions against Iran, which ultimately produced a nuclear deal. This approach can and should be replicated across the region to enforce human rights principles in places like Saudi Arabia and the UAE, especially considering the outsized influence of the United States within these states due to weapons sales.

As the CATO Institute Risk Index showed, many MENA states are heavily invested in U.S. weapons inflows that are ultimately used to repress their people or harm civilians in places like Yemen. In addition, these same states spend considerable funds lobbying Washington to support their national interests. The United States is therefore uniquely positioned to pressure the Gulf monarchies but needs to build coalitions to avoid loopholes around U.S. pressure that would ultimately condition continued arms sales on substantially improved human rights records.

Just as arms sales provide the United States with leverage in the MENA region, a Biden administration must recognize the power of international organizations for building coalitions that promote human rights. Although flawed, the United Nations Human Rights Council (UNHRC) offers a platform for pressuring human rights violators, as reflected by Denmark’s twenty-nine-member letter condemning the recent trial over the killing of Saudi journalist Jamal Khashoggi. The United States should not only rejoin this body but also work to build coalitions of human rights-respecting states within it and other organizations at international and regional levels.

This type of coalition-building via diplomatic tools should also promote military restraint. An entire generation has witnessed the harmful effects of U.S. military intervention in places like Iraq, Afghanistan, and Libya. This stems from a conceptualization of exceptionalism within the United States that has led to arbitrary attempts to project influence around the globe via military strength. A diplomacy-centered foreign policy doctrine needs to reject this mindset.

A rejection of this mindset should not only reflect an understanding that the United States is only as powerful as its allies on the international stage, but also that domestic issues and diplomatic efforts cannot be placed on the backburner to fund military intervention around the world. Rather, defense spending should be curtailed to address issues of equality and development at home, alongside a revamping of the U.S. Department of State and its diplomatic forces around the globe that have been hobbled under the Trump administration.

This is an outline for a renewed foreign policy doctrine that the Biden administration must consider for the MENA region, as well as globally. Diplomacy and human rights constitute the core of international peace and security, of which the United States has historically helped build through multilateral cooperation and military restraint. However, its recent unilateral path, driven by militarism in both weapons sales and military intervention, continues to harm its legitimacy and will contribute to the MENA region’s destabilization.

Image: Members of Saudi security forces take part in a military parade in preparation for the annual Haj pilgrimage in the holy city of Mecca, Saudi Arabia August 4, 2019. Reuters.