Can Israel Still Count on the United States? 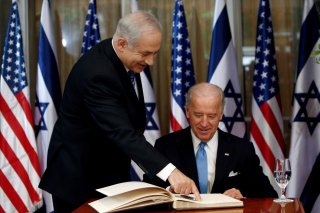 Israel, which enjoys a “special relationship” with the United States, has watched recent events in Afghanistan closely. For Israel, there is real concern over an impending U.S. withdrawal from Syria and Iraq, two nations that are within close geographic proximity to Iran. U.S. support on these fronts is crucial to Israel’s security. Israelis say that Iran’s nuclear program poses a very serious threat to Israel’s existence in the region. Others insist that Iran’s nuclear program is a distant threat for Israel. However, Israel, as a geographic entity, does not have enough space to maneuver during wars and lacks the strategic depth to defend itself against its enemies. As such, because Israel is well aware that the threat posed by Iran goes beyond Israel’s military capability, Israel would not venture to engage Iran directly. For this reason, Israel’s best option is for a superpower to deal with the threat. That sums up Israel’s current dependency on a continued U.S. presence in the region.

Iran’s nuclear program notwithstanding, the imminent threat actually stems from Iran’s proxies in the region. In Syria and Iraq, Iran effectively uses its proxies to cheaply maximize its influence. In Lebanon, Hezbollah is directly linked to Iran politically and militarily. That connection creates a geographical advantage for Iran if an attack is planned against Israel. Israel views the presence of U.S. forces in the region as a balancing factor to counter this geographic disadvantage and the imminent threat coming from Iran and its proxies. America’s shocking assassination of Iran’s Qasem Soleimani last year was proof of this and showed how critical U.S. troops and military assets are to countering the Iranian threat to Israel.

U.S. support for Israel does not just provide security to Israel in military terms. It also provides an opportunity for Israel to develop improved relations with its neighboring countries. Despite the euphoria surrounding the Abraham Accords, the deal merely formalized already existing relationships between the Arab Gulf countries and Israel. The accords are actually more of an axis against Iran, Iranian proxies, and political Islam, all of which most of the Arab Gulf countries consider as threats to their security. In addition, the accords served as a message from the Gulf countries to the United States showing that they are viable U.S. partners in the region.

Israel benefited most from the accords economically. Israel’s Central Bureau of Statistics shows that Israel’s foreign trade with the UAE has jumped from $50 million to $613.9 million in one year. But all this happened thanks to one famous saying: In the Middle East, the road to Washington goes through Tel Aviv. In other words, if you have a good relationship with Israel, you might gain the backing of the United States. Despite not having a formal relationship with Israel, Saudi Arabia also has the backing of U.S. troops. However, the shadow of the Afghanistan withdrawal hung over Saudi Arabia as the United States removed its advanced missile defense system and its Patriot batteries from Saudi Arabia. The kingdom’s Prince Turki Al-Faisal is now seeking the assurance of an American commitment.

In the midst of the frenzy over the U.S. withdrawal from Afghanistan, a number of former Israeli generals and security analysts pointed out that Israel is fully capable of protecting itself in the region even without a U.S. presence in the Middle East. Still, some of them believe that the United States would never abandon Israel. With this in mind, it is reasonable to question these assumptions of self-sufficiency.

Hamas viewed the U.S. withdrawal from Afghanistan as a Taliban victory and consequently as the defeat of the United States. This is a development that Israel can’t overlook. For groups such as Hamas and other anti-Zionist movements, the victory of a self-styled jihadist group like the Taliban over the United States shows that no power is unbeatable. In addition, Iran may now be counting on the United States to withdraw from Iraq. This would be a welcome development for Tehran, which would be able to enhance and deepen its influence in Iraq.

That was another what-if moment for Israel. The Israeli news outlet Walla reports that a senior Israeli source expects Israeli prime minister Naftali Bennett to ask U.S. president Joe Biden not to withdraw U.S. forces from Syria and Iraq. During their first meeting in the White House on August 27, Bennett sent a message suggesting that Israel will not outsource its security. This could be intended to convey that Israel will keep its operational freedom alive against a possible Iranian attack or serve as a message that Israel can protect itself.

Israel should worry that U.S. military assistance and its near unconditional diplomatic support may now become conditional. The Arab Gulf countries had already recognized this new dynamic in the region. Now, the UAE wants to improve its relationship with Turkey and there has been recent diplomatic engagement between Egypt and Turkey. In addition, Qatar, the UAE, and Saudi Arabia appear to be moving past their old hostilities. Israel enjoyed a strategic environment where these actors were hostile toward each other during the Trump-Netanyahu era. Now, there is a new equilibrium in the region and Israel cannot afford to be left out.

In view of these concerns, and in the event of a full U.S. withdrawal from the Middle East, Israel may find itself faced with many different scenarios, requiring it to find other allies in the region for its security. Despite the Abraham Accords and the countries’ new positionings in the region, Israel still finds itself among hostile Arab states. For example, some conflicting reports point to the fact that Israel opposes the sale of F-35 stealth fighters to the UAE and Qatar. Considering the uncertainties that came to the fore once again during the Arab Spring and amid changing alliances in the region, Israel’s concerns that one day these F-35s could be used against Israel are justified. Israel’s actions towards the Palestinians, and especially towards the Al-Aqsa Mosque, can rapidly change the attitudes of Arab people and regimes in the region if the United States should withdraw from the region.

Mustafa Fatih Yavuz is TRT World’s Jerusalem correspondent. He has been covering the region specifically Palestine-Israel for four years from the territories. He also graduated from the Conflict Resolution and Mediation department of Tel Aviv University.