Iran Counts Down Days Until U.S. Withdraws from Iraq 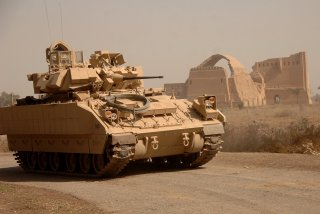 Ever since former U.S. president George W. Bush encircled Iran from the west and east by invading Afghanistan and Iraq, Iran has tried its utmost to expel U.S. troops from the Middle East. Today, Iran is getting closer to achieving its long-held goal.

After the Trump administration assassinated Iranian general Qasem Soleimani in 2020, the Islamic Revolutionary Guard Corps (IRGC) announced that Iran was committed to the total withdrawal of United States troops from the region. Iran now has reason to feel hopeful; President Joe Biden’s desire to extricate the United States from a series of “forever wars” presents Tehran with a golden opportunity to rid itself of the neighboring U.S. presence once and for all.

Biden says U.S forces will end their combat mission in Iraq by the end of 2021, with all combat troops departing the country by the end of the year. Afterwards, only U.S. trainers and advisors will remain. The policy appears little more thought-out than the administration’s Afghanistan withdrawal, which incited a humanitarian crisis and the Taliban’s takeover of the country.

Some 2,500 U.S. soldiers are deployed in Iraq, where they protect a few strategic bases, including the Al-Harir base in Erbil, Ayn Al-Asad base in Anbar, and Camp Victory in Baghdad.

The Iraqi Army’s Head of Joint Operations Command major general Tahsin al-Khafaji told the Iraq News Agency that U.S. troops had started withdrawing in large numbers, and the United States has not made any requests to maintain its forces’ presence in Iraq.

The commander added that the United States has said it will abide by the agreement reached in its strategic dialogue with Iraq and that December 31 will be the last day of the U.S. military presence in Iraq.

Days after Biden and Iraqi prime minister Mustafa al-Kadhimi agreed to end the U.S. combat mission in Iraq by the end of 2021, the debate about the U.S. departure and how the United States should exit Iraq took on new prominence in the United States and across the Middle East.

Iran is deeply interested in American’s withdrawal from Iraq and would likely benefit from it. Some unofficial reports say that Iran has provided military support to various Iraqi militias in a bid to accelerate the U.S. exit by galvanizing opposition against the U.S. troop presence, but Tehran has denied such claims. Some anonymous sources told Reuters in July 2021 that a senior Iranian Revolutionary Guard commander urged Iraqi Shi’ite militias to step up attacks on U.S. targets.

Either way, Iran stands to directly benefit from the U.S withdrawal from Iraq, and Israelis have made no secret of their concerns about it.

Yossi Cohen, former chief of the Mossad intelligence service, has warned that “Tel Aviv should fear a scenario of US withdrawal from Iraq as it would lead to Iran and its proxies dominating the Middle East.”

“The U.S withdrawal of soldiers in Iraq would ignite a sectarian conflict, pushing Iran to increase its military presence,” he added.

In Iraq, Iran-allied Iraqi parties and Shiite militias favor the U.S. departure; on the other side, Kurds and Sunni parties want U.S. forces to stay.

After the U.S. withdrawal, Iran-backed forces will clearly increase their domination over Iraqi politics. Kata’ib Hezbollah, the al-Ḥashd ash-Sha’bi, and other resistance axis groups have frequently emphasized that they are a strong opponent of U.S. presence in Iraq.

“Iraq should take actions to make sure the Americans withdraw their troops from Iraq as soon as possible because wherever they have had an enduring presence, forcing them out has become problematic,” Iranian supreme leader Ayatollah Ali Khamenei told the former Iraqi Prime Minister in April 2019.

Some analysts believe that the U.S. withdrawal from Iraq, especially from Iraq’s Kurdistan province, may allow Iran’s IRGC to exploit the resulting power vacuum by removing the Iranian Kurdish opposition groups entirely from the country.

In January 2020, in response to a growing backlash following the U.S. killing of Soleimani and Iraqi militia leader Abu Mahdi al-Muhandis in Baghdad, Iraq’s parliament passed a resolution calling on the government to end the foreign troop presence in Iraq. However, some Iraqi officials and pro-Western figures believe that the U.S. withdrawal will threaten the country’s security by aiding the presence of ISIS and Iran-backed militias. Thousands of jihadist militants are still active in Iraq waiting for an opportunity to launch a new insurgency against Iraqi security forces and the civilian population.

While the U.S. withdrawal from Iraq may amount to handing over the country to Iran, the presence of a small number of U.S. troops to train the Iraqi Army, continuing U.S. arms sales, and increasing bilateral intelligence cooperation can reduce Iran’s ability to dominate Iraq after the United States departs.

“It is clear that Iranian leaders seek to maximize their influence over Iraq’s parliament, prime minister, and cabinet; to reap economic benefits from Iraq’s oil revenue and domestic economy; to exercise influence over the Iraqi energy sector, and to dominate Iraq’s security sector through the Popular Mobilization Forces. Gaining predominant influence in Iraq would greatly enhance Iran’s ability to project power in the region, consolidating its position in Syria and Lebanon and increasing the threat to Iraq’s other neighbors and Israel,” a team at the RAND Corporation wrote in a 2020 study on the strategic risks of the U.S. withdrawal from Iraq.

For Iraq, its efforts to balance between the United States and Iran continue to be a matter of national concern. After the Americans withdraw, Iraq’s internal power balance will change in Iran’s favor.

While the United States will soon leave Iraq, it seems that Iran will continue to affect Iraqi affairs to promote its interests. Furthermore, since Iran will likely view a second U.S. departure from the Middle East as another strategic success, it is difficult to imagine that Tehran will not feel increasingly emboldened.