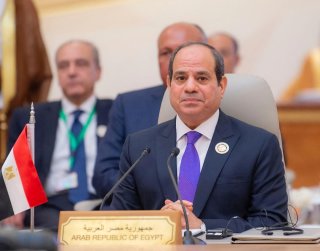 Egyptian president Abdel Fattah el-Sisi traveled to Doha, the capital of Qatar, on Tuesday, marking his first visit to the small Gulf nation since the four-year Gulf diplomatic crisis from 2017 until 2021.

Sisi began his two-day trip by meeting with Qatari emir Sheikh Tamim bin Hamad Al Thani at the country’s main airport, according to Qatar’s state-run Al Jazeera news network. The two leaders are expected to discuss bilateral ties and potential investment opportunities within Egypt, which saw a sharp decline in its massive tourism industry and anemic economic growth rates following the onset of the COVID-19 pandemic.

Qatar and Egypt have largely been at odds since 2013, when Sisi—then the leader of the Egyptian armed forces—overthrew his predecessor in office, the Muslim Brotherhood-aligned President Mohamed Morsi, in a military coup. Qatar, which is widely thought to be sympathetic to the Muslim Brotherhood, had supported Morsi and opposed the coup, leading to immediate tensions. Four years later, in June 2017, four Arab nations—Egypt, Saudi Arabia, the United Arab Emirates, and Bahrain—simultaneously cut diplomatic relations with Qatar and organized a blockade of its territory, demanding that it close Al Jazeera and end its ties to the Brotherhood. Qatar refused, launching a four-year crisis that ended at a Gulf Cooperation Council (GCC) summit shortly before U.S. President Joe Biden entered office in January 2021.

Following the five countries’ normalization, diplomatic ties between Qatar and the four former blockading nations have resumed, and Egypt has sought investment from the hydrocarbon-rich Gulf state to support its economy—particularly in the wake of the Russian invasion of Ukraine, which led to high inflation rates and dramatically increased the cost of Egypt’s large-scale foreign grain purchases. In March, the Egyptian government announced that Qatar had agreed to invest $5 billion in the country, and Qatar’s state-owned QatarEnergy oil and gas company partnered with ExxonMobil to purchase a stake in Egyptian offshore drilling operations. The two countries have also cooperated in the realm of foreign policy, helping to mediate a ceasefire between Israel and the Islamic Jihad group in the Gaza Strip in early August.

Sisi’s visit to Doha comes after an earlier visit by Sheikh Tamim to Cairo in June. During that meeting, the two leaders discussed foreign investments and Qatari-Egyptian cooperation in several areas, including agriculture and energy production.