Eight Years After Genocide, the World Owes the Yezidis a Debt 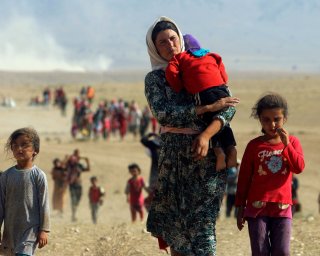 When the Global Coalition to Defeat ISIS and the Syrian Democratic Forces announced the territorial defeat of ISIS in 2019, the world breathed a sigh of relief. The terror group that had once controlled a swath of Iraq and Syria the size of Great Britain, carried out sophisticated attacks abroad, and committed unspeakable atrocities against the peoples of the region was gone.

For the Yezidi community—which ISIS sought to eradicate in a genocidal campaign that began eight years ago this week—the defeat should have offered a chance to recover and rebuild. Yezidis hoped that the women and children abducted in 2014 would be returned to their families, Sinjar would be rebuilt, displaced people would come home, ISIS members would face justice for their crimes, and they would move towards a future where no such atrocity could ever happen again.

Yet nearly a decade after the genocide began and more than three years after ISIS lost its so-called caliphate, these basic goals have not been realized. The very same governments that claimed “never again,” recognized ISIS crimes as genocide, and offer rhetoric in support of the Yezidi people are partially to blame.

The international military response that led to the defeat of ISIS was commendable. Had the United States and its allies not taken action to stop the group in Iraq and Syria in 2014, the Yezidi community might have been permanently destroyed.

Political responses, however, have failed, largely because they have not recognized or addressed the structural factors and root causes behind ISIS atrocities. History has shown time and time again that genocide never begins with mass killing—such violence is always a process preceded by marginalization, persecution, and dehumanization.

The marginalization, persecution, and dehumanization of Yezidis in their ancestral homelands in the Middle East began long before 2014. They have never been equal citizens in the states in which they live, and Yezidi identity has gone unrecognized. Their neighbors have treated them with suspicion and contempt. Even today, many refuse to buy food made by Yezidis, believing it to be unclean.

These attitudes resulted in mass violence long before 2014 as well. In the most egregious example, as many as 300,000 Yezidis were massacred by Ottoman forces alongside the 1.5 million Armenians killed during the Armenian genocide. Just seven years before ISIS attacked Sinjar, Sunni extremist bombings in the region killed nearly 800 people and injured more than 1,500.

In an ideal world, the global response to the Yezidi genocide would have been informed by this history and sought to right these wrongs. Instead, it has in some ways inadvertently perpetuated dangerous inequalities.

The Sinjar Agreement is one manifestation of this flawed approach. The stated intent of the agreement—promoting peace and stability in post-ISIS Sinjar—was commendable, and some aspects of the agreement are useful. Yet nearly two years after the agreement was made, it appears to have increased, not reduced, instability. This is a direct result of the fact that the agreement prioritizes the interests of the governments in Baghdad and Erbil that have failed to protect and represent their Yezidi constituents—and left Yezidi civil society out of the agreement negotiations.

An unwillingness to confront bad actors who pose a threat to Yezidi communities is another key factor. Growing outrage towards Turkey’s military presence in Iraq after Turkish strikes killed nine Iraqi civilians in Zakho is a welcome step. Yet it calls into question why there has been no such outrage in response to the repeated Turkish strikes that have been killing Yezidi genocide survivors in Sinjar for years and preventing displaced Yezidis from returning home. If Iraqi authorities and the international community truly valued Yezidis and other ethnic or religious minorities, they would have pushed back against Turkish aggression long ago.

Eight years of political failure is eight years too many for genocide survivors hoping to rebuild and move forward. The international community must commit to empowering Yezidis—beginning with Yezidi civil society—to build a safe, sustainable post-ISIS future with the same vigor deployed in defeating ISIS.

First, there must be a concentrated international effort to end all internal and external attacks on Sinjar. One important step would be closing the region’s airspace to foreign aircraft, with exceptions exclusively for counter-ISIS missions. Successful precedents for such a policy exist.

This could and should expand to an effort to keep foreign conflicts out of Iraq entirely. All actors that want to use Iraq as a battleground should be pushed to resolve disputes peacefully. The diplomatic effort it would take to promote such a change would undoubtedly be difficult. However, in the long run, it would not be more costly than the continued consequences of conflict and foreign intervention in Iraq for Yezidis and other vulnerable communities.

The Sinjar Agreement should also be renegotiated under impartial international mediation and with the participation of Yezidis of all political perspectives. The new agreement should not serve foreign political agendas, and it must not include or condone targeted military action against Yezidis or the expulsion of any Iraqi Yezidis.

Concurrently, there must be a concentrated effort in both Baghdad and Erbil to promote equal and just political participation for minorities. Yezidis should be able to participate in both governments as representatives of Yezidi interests—not as tokens for political parties.

Efforts to provide humanitarian assistance and promote reconstruction should be based on the needs of Yezidi civil society and facilitate real social, political, and economic empowerment rather than creating dependency and reacting to crises as they occur.

Pari Ibrahim is the Founder and Executive Director of the Free Yezidi Foundation.