Life After Genocide: Why Near-Failed States Struggle With ‘Normalcy’ 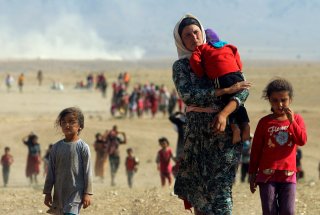 On the other side of a world-changing pandemic, the war against the Islamic State seems to be a distant nightmare. But it was only two and a half years ago, in March 2019, that the last stronghold of the Islamic State, also known as ISIS, fell to the combined arms of the United States and its allies in Baghuz, Syria. It was a victory almost five years in the making in a war that had seen fighting and massacres all around the world, from Damascus to Baghdad, Paris to San Bernardino.

The same month that Baghuz fell, just over a hundred miles away, the exhumation of one of the Islamic State’s worst atrocities began at the mass grave in Kocho, near Sinjar in Iraq. It was in Kocho on August 3, 2014, that the Islamic State launched its campaign of genocide in earnest, executing hundreds of Yazidis solely because of their faith, and enslaving hundreds more women and children. It was the plight of the Yazidis that first brought America into the war, and the first U.S. airstrikes were launched four days after the Kocho massacre. But it was too late for many of the people living in the path of ISIS: by the end of the year the scouring of northern Iraq of its ancient and diverse faith communities was almost complete, devastating not only the Yazidis but also Shabak, Kakai, and some of the oldest Christian communities in the world. Hundreds of thousands of traumatized survivors huddled in makeshift camps or unfinished buildings behind the fragile security of the Kurdish front line.

Today, seven summers and one pandemic later, it’s important not to forget the Islamic State’s genocide, nor what the United States did to make things right. This is not just a victory of arms but also one of reconstruction and renewal, which is something that is too often overlooked that even in the most righteous war, in the wake of liberating armies lie broken communities, harrowed survivors, and mistrustful neighbors. Rebuilding those lives takes resources, commitment, patience and a degree of nuance that does not always come easily to the United States. But in Iraq, at least for a time, America got it right.

The effort to rehabilitate the shattered communities of northern Iraq largely fell to the U.S. Agency for International Development (USAID), where I was a senior official in the Middle East Bureau. And at first it did not go well. Misunderstandings of the problem, disagreements over priorities, bureaucratic challenges, and legal confusion all conspired to make early efforts ineffective. But we learned from those early missteps, and after painful fits and starts, the U.S. foreign aid engine revved up with commitment, scale, and creativity. The lessons my colleagues and I learned during the genocide recovery effort in northern Iraq are important not just for what they can teach America about this particular effort but for future responses around the world. And future responses there will be: whether in Nigeria, Burma, or China, the scourge of religious persecution continues relentlessly.

First and most importantly, the survivors themselves need to be a central part of the planning and executing of the recovery. U.S. government donor agencies prefer to work through big UN organizations, nonprofits, and for-profit contractors who speak English, write excellent proposals, and have the financial capacity to comply with onerous reporting and auditing requirements. Many of these groups do good work, but they’re not without their drawbacks—and the biggest is that they are often perceived by locals as disinterested foreign organizations that are not well connected to the communities in which they work. They may have Iraqi staff, or even an Iraqi lead, but they’re implementing a project that was designed and approved thousands of miles away in Brussels or Washington.

In the early days of the recovery in Iraq, in 2017 and early 2018, USAID relied heavily on the United Nations Development Programme to rehabilitate power stations, schools and health clinics. The UN program did acceptable work overall, but it was perceived by Iraqis as ignoring local voices in favor of those of the Baghdad government which had abandoned them to the tender mercies of ISIS in 2014. Indeed, the UN’s deference to often weak (or in the case of neighboring Syria outright maniacal) government structures is an institutional blind spot that inhibits its operational arms from better meeting the needs of local communities. It was only when USAID began diversifying its partners to include smaller Iraqi groups based within the communities themselves, such as the Assyrian Aid Society-Iraq and Nadia’s Initiative, that local views of recovery efforts began to change.

Compounding the challenge of community engagement is the fact that traumatized communities are fragmented ones. When your very survival is at stake, as a people, a family or an individual, a zero-sum mentality takes hold and is hard to escape, even after the immediate danger has passed. The religious minorities of Iraq were fragmented to being with, subject to state sponsored neglect and discrimination for hundreds of years prior to the 2014 ISIS genocide. So when the United States rebuilt a damaged school in one Chaldean Christian town, it was not perceived as helping all Chaldeans, let alone all Christians of all denominations, let alone all genocide survivors of all faiths. On the contrary, something as simple as building a school or well could be perceived as favoring one group or one leader over another.

Perception is reality. If the communities that the United States is spending millions to rebuild don’t think the United States is active, or is active in all the wrong ways, the effort will not succeed. Until the summer of 2018, USAID waived the requirement for its implementers to brand their activities with the USAID logo, and as a consequence there was very little visible evidence that the United States was doing anything at all. In addition, security threats kept U.S. diplomats largely confined to compounds in Baghdad or Erbil and unable to visit local communities. This lack of visible presence contrasted disastrously with the omnipresent posters of Iranian Ayatollah Khomeini, totems of the Shia militias that had helped defeat ISIS and were now occupying ethnically cleansed parts of northern Iraq as personal fiefdoms.

The final lesson that my colleagues and I learned during the genocide recovery in northern Iraq was that security trumps everything. If people do not feel safe returning to their homes, then it does not matter that roads have been cleared of rubble, power has been restored, and health and education services are available. And sadly, to this day America and its partner, the Iraqi government, have yet to figure out how to roll back the motley collection of gangs, terrorists, and militias that continue to plague everyday citizens in Sinjar, Tel Kaif, and many other towns and villages across the Islamic State’s former territory. Neither low-intensity conflict between the U.S. and Iran-backed militias nor ephemeral agreements with Baghdad have altered the calculus individual families need to make: will we be safe if we return home?

Persistent security concerns aside, America got the rebuilding part of Iraq’s genocide recovery right. From a handful of big international implementers in 2017, today USAID is working with more than a hundred partners, many of them local Iraqi groups, conducting every type of work from infrastructure to much needed psychosocial support and jobs creation. Whereas in 2018 there was hardly any USAID presence to be seen in northern Iraq, today everywhere you drive between Mosul and Erbil you’ll see the clasped hands and “From the American People.” U.S. officials prioritize outreach to community leaders from across the spectrum of religious minorities, delicately but resolutely juggling often-conflicting priorities while eliciting feedback on programs. As a result of these efforts, according to the International Organization for Migration (IOM) hundreds of thousands of Iraqi Yazidis, Christians, and other minorities have gone home, and vitality is returning to once abandoned places like Sinjar and Batnaya.

But the Yazidis have long memories, and can speak of more than seventy genocides inflicted on their people over the centuries. They know that the ISIS genocide is only the latest atrocity, and may not be the last. Christians, too, have seen their numbers dwindle in Iraq from 1.4 million in 1987 to as few as 200,000 today. America and its allies should be proud of their victory over a truly evil enemy in ISIS. They should be proud of their efforts to bring the victims of the Islamic State back from the brink. But as with the larger fight against ISIS, victory in genocide recovery is incomplete and tenuous: without continued investment and commitment by the United States, in both development and security, we may witness the final twilight of some of the region’s oldest religious communities.

Hallam Ferguson is a Public Policy Fellow at the Wilson Center. Previously, he served as the Senior Deputy Assistant Administrator for the Middle East Bureau at the United States Agency for International Development (USAID) from 2017 to 2021. Prior to joining USAID, Ferguson worked at the International Republican Institute conducting democracy and governance programming throughout the Middle East.