Will Anyone Protect the Yazidi Survivors of ISIS Genocide? 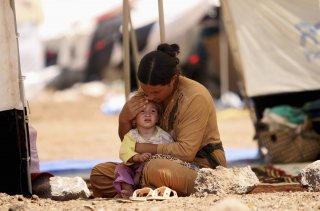 The Yezidi community of Iraq is still in danger of genocide, community members and a U.S. official warned on the sixth anniversary of the violent campaign to exterminate the ethnoreligious group.

Yezidis were among the worst-hit victims of the Islamic State, also known as ISIS, which descended on the Yezidi homeland of Mount Sinjar in August 2014. Reports of brutal atrocities on the mountain moved the United States to finally intervene against ISIS.

But six years later, the Yezidi community is still in grave danger, speakers said at a Free Yezidi Foundation conference held to mark the anniversary of the genocide.

She noted that an entire generation of Yezidi children have grown up in displaced persons camps, unable to return home.

The towns and villages of Sinjar have not been rebuilt, with water and electricity mostly unavailable. To make matters worse, several different armed groups are active in the area.

“Security is the number one thing that we have to worry about,” said Murad Ismael, co-founder of YAZDA, a Yezidi NGO. “It’s possible ISIS or another group like it will find roots again.”

Sinjar is currently disputed between the Iraqi central government and the Iraqi Kurdish regional government, and Iranian-backed militias are active in the area.

Ismael said that the Kurdish government needs to come to an agreement with Baghdad, that Iraq also has to “build an army that only obeys the law.”

The area has also come under attack from Turkey, which is waging a military campaign to root out Kurdistan Workers Party guerrillas. The guerillas had participated in the campaign to rescue Yezidis from ISIS but are considered a terrorist group by the Turkish government.

Ismael condemned these Turkish operations, but also said that the community should “address some issues so Turkey does not have concerns.”

Nadine Maenza, a commissioner at the congressional U.S. Commission on International Religious Freedom, said that Turkey was acting as the major obstacle to resolving the issue.

“It’s not a coincidence that these airstrikes happen when there are large numbers of returnees or religious holidays,” she said.

Maenza claimed that the greatest threats to the Yezidi community included Turkey’s “alliance with radical Islamist militias” and the “corrosive presence” of Iranian-backed militias.

The Yezidi community in neighboring Syria has also come under attack from Syrian rebel groups in the Turkish-occupied region of Afrin, who have allegedly destroyed Yezidi shrines and kidnapped civilians.

Finally, around three thousand Yezidi women and children are still missing. ISIS had kidnapped thousands of civilians as part of its extermination campaign, subjecting women to sexual slavery and forcibly converting children to Islam.

Last week, a Yezidi family claimed that it had rescued one of its members after nearly six years in captivity. The woman had allegedly been held by an ISIS member living in Turkey.

But military threats are not the only problem facing the community.

“After security, education is the most important thing for Yezidis around the world,” said Free Yezidi Foundation board member Nawaf Ashur. “Most of what was destroyed has not yet been rebuilt.”

He said that 35 schools in Sinjar with hundreds of students each were destroyed, while “religious discrimination” and “attacks on Yezidi students” have continued to block Yezidi access to education in other parts of Iraq.

The solution to these issues, Ismail stated, was “to create a situation” for minorities that “will not be subject to political change.”

“When you are a minority, you don't make your own rules,” he said.