America Once Tried to Get Rid of This Refugee Camp. Now Turkey is Bombing It. 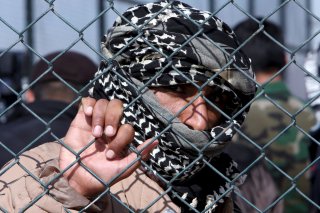 On June 14, 2020, Turkish bombs smashed into the Makhmour refugee camp in Turkey’s “largest ever” air raids on Iraq.

This was not the first time a Western power had come for Makhmour. In 2003, U.S. officials began a years-long diplomatic campaign to empty the camp and bring its Kurdish inhabitants back under Turkish control.

U.S. forces came, went, and came again, but the camp was still there. Turkey has since bolstered its own presence in northern Iraq and is determined to take matters with the Kurdish militants in the region into its own hands.

The story of Makhmour is not only the story of one refugee camp. It is also the story of America’s long war in the Middle East: an ill-fated adventure in Iraq, a confused and contradictory policy towards Turkey and the Kurds, and a dwindling ability to forge any kind of influence from the chaos.

And it is the story of about twelve thousand innocent people trapped in political limbo.

“We have been suffering for the past twenty six years as refugees coming from Turkey,” Çiçek Cengiz, a spokeswoman for the camp, told reporters in a video conference on June 16. “All the countries that present themselves in support of democracy and human rights, they are being silent in the face of such incidents due to profit.”

Turkey’s raid on Makhmour was part of a larger operation aimed at the Kurdistan Workers Party, or PKK, an insurgent group that has waged war on the Turkish state for decades.

But the June 2020 operation was a massive, publicized operation, aimed at Qandil as well as Sinjar and Makhmour.

“An emboldened Turkey—its confidence reinforced by success in Libya and strengthened U.S. diplomatic support—is trying to take care of unfinished business,” said Alan Makovsky, a senior fellow at the Center for American Progress.

Turkey’s unfinished business began in 1984, when the PKK launched an uprising for Kurdish independence. Hundreds of thousands of Kurds fled both the uprising and the state’s crackdown, which often involved village demolitions, over the next few decades.

Meanwhile, the United States imposed a no-fly zone over Iraqi Kurdistan after defeating Iraqi dictator Saddam Hussein in the Persian Gulf War of 1991.

The no-fly zone allowed the Iraqi Kurds to create a semi-independent territory. Although some Iraqi Kurdish parties were opposed to the PKK, the militant group was able to carve out its own safe haven in the Qandil Mountains.

Turkey launched airstrikes and a few ground operations aimed at rooting them out.

The United States was uneasy with Turkey’s incursions at first, but eventually “blessed it as long as it was limited in duration and scope,” said Makovsky, who was stationed in Turkey in 1992 as a State Department liaison to the U.S.-led coalition protecting the no-fly zone.

“I don’t think Turkey asks our permission” for air operations, he added. “They’d give us thirty minute warnings—get your planes out of the way, we’re coming in.”

Thousands of Kurdish civilians also found refuge in Iraq. The UN High Commission for Refugees began supporting a refugee camp for Turkish citizens at Makhmour in 1998.

It was a fertile recruiting ground for the PKK. U.S. officials estimated that there were about two hundred PKK fighters at the camp, diplomatic cables leaked by WikiLeaks reveal.

Makhmour became a headache for the Bush administration during the 2003 invasion of Iraq. The U.S. government considered—and still considers—the PKK a terrorist organization.

The camp first came up in September 2003, when Turkish chief of staff Gen. Hilmi Özkok told U.S. Amb. Eric Edelman that Turkey wanted to cooperate on resettling the camp’s refugees, according to cables written by Edelman.

Later that month, UNHCR representative Gesche Karrenbrock told Edelman that the camp’s residents did not see “signs that they are wanted back in Turkey.” She “stressed that there was a need to separate the true civilians in the camp from [PKK] militants.”

Edelman wrote to his superiors that U.S.-Turkish cooperation against the PKK was “essential to convincing the public and many of the elite that Turkish military participation in Iraq is in Turkey’s national interest.”

He recommended an effort to separate PKK elements from Makhmour’s general population, along with a “psyops campaign” aimed at the militants “with a firm message that the window for peaceful surrender is rapidly closing.”

Turkish, Iraqi, UN, and U.S. officials negotiated over Makhmour for the next several months. They eventually agreed to a preliminary deal to “close the camp and voluntarily repatriate its residents to Turkey” in January 2004.

“The deal fell through, however, because the Turks insisted that Secretary [of State Colin] Powell sign a letter of guarantee, including a commitment to take the steps necessary to stop [PKK] infiltration,” Edelman reported a year later. “We were not then (and likely are still not) in a position to provide such a guarantee to the Turks.”

Edelman did not respond to an email request for an interview, and the State Department does not comment on “purportedly leaked documents” as a matter of policy.

Makovsky, then a Democratic staffer on the House Foreign Affairs Committee, told the National Interest that “we were not going to send these people back to Turkey if there was any danger they were going to be mistreated.”

Iraqi and U.S. officials attempted a variety of schemes to deal with the camp and its alleged PKK presence. They pressed Turkey to provide amnesty to accused PKK members, proposed resettling Kurdish refugees inside Iraq, looked at third countries to send the refugees to, and even raided the Makhmour camp to look for weapons and fighters.

Turkish officials always responded to the proposals with one question—why hadn’t the camp been closed yet?

General Joseph Ralston, special envoy for counter-PKK operations, reported to Congress in March 2007 that Turkey and Iraq were making “movement toward closure of the Makhmour refugee camp.”

Iraqi-Turkish negotiations broke down completely the next month. U.S. officials in Ankara and Adana later reported in a joint cable that Turkey had “decided it politically unsustainable to accept for resettlement such a large number of PKK sympathizers/supporters.”

And then Turkish troops directly invaded northern Iraq to hunt down the PKK in February 2008.

“We would have preferred it not happen,” Makovsky said. “In particular, there was suspicion of Turkey’s intention—whether it was simply to hit the PKK, or in fact to destabilize [Iraqi Kurdistan], the one part of Iraq that was stable, and in effect, a U.S. success story.”

There were small diplomatic breakthroughs in late 2009, when Iraqi and Turkish officials began to discuss Makhmour directly again.

Turkish officials asked Ambassador James Jeffrey, then U.S. Ambassador to Iraq and now special representative for counter-ISIS operations, for help “cutting off ties between the PKK and Makhmour Refugee Camp and returning those residents who wish to do so to Turkey” in February 2010.

Then the paper trail goes dark—the WikiLeaks cables end in 2010. The State Department did not respond to a question about the current U.S. position on Makhmour.

“As far as I know, it’s been frozen since then,” Makovsky said.

“We Will Not Go Back”

The Makhmour camp was still open in 2013, when Turkey and the PKK began peace negotiations.

The negotiations “will hopefully lead to a ceasefire followed by political compromise,” wrote Jenna Krajeski, reporting on the peace process for The Atlantic at the time. “The women of Makhmour Camp will go home.”

But then the refugees faced an entirely different threat.

But the PKK fought back. The militants showed up at Makhmour to protect the refugee camp, and rescued the Yezidi religious community of Mount Sinjar from a genocide.

“For us it was not a heavy fight,” Tekoshar Zagros, the swaggering PKK field commander at Makhmour, told the National Interest at the time.

Makhmour itself gave four “martyrs” to the fight against ISIS and had over twenty war wounded, Cengiz says.

Suddenly, the situation was more complicated for the United States. The PKK was still considered a terrorist group, but it was now also a co-belligerent against ISIS.

This was a major problem for Turkey, which watched both the PKK and its ideology spread to neighboring countries, gaining legitimacy both at home and abroad.

Kurds in neighboring Syria took up arms under the flag of a PKK-inspired militia that would later become the U.S.-backed Syrian Democratic Forces. And a Kurdish-led party, the HDP, suddenly rose to fourth place in Turkish parliamentary elections.