U.S. Officials Calls For Talks Between Turks and Kurds In Syria 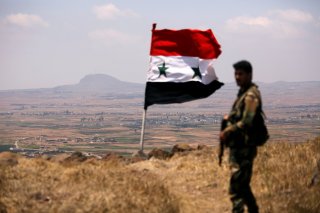 A U.S. State Department official is pushing for talks between Turkish- and Kurdish-led factions in Syria as part of a broader push for a political solution that would edge out Syrian ruler Bashar al-Assad.

The United States has attempted to court both Turkey and the Kurdish-led Syrian Democratic Forces—who have been at war with each other multiple times—as part of its strategy in Syria. Col. Rich Outzen, the State Department’s senior advisor for Syrian engagement, suggested bringing the two factions together at the negotiating table.

“The autonomous administration—whatever you want to call it, I don’t want to get into pejoratives, whatever, the folks that are running most of the northeast right now—and the folks that are running the other parts of it, like the Turks and the Turkish-supported opposition, and the broader opposition all need to talk,” Outzen said at a Wednesday video discussion hosted by the SETA Foundation, a pro-government think tank in Turkey.

Outzen said that the talks could fit into a political solution for all of Syria under United Nations Security Council Resolution 2254, which calls for UN-supervised elections to create “credible, inclusive and non-sectarian governance.”

“It’s not so much regime change that we’re after so much as a change in the nature of the regime’s treatment of its people,” Outzen said. “We don’t see how this happens with Assad.”

He warned that the alternative to a “political compromise” between Assad and other factions would be “a lot of killing,” referring to reports of renewed violence in southwestern Syria as “a good fast-forward to how the rest of Syria will look if there's no 2254.”

The Trump administration has leaned on Turkey and its Syrian rebel allies to push back against Assad’s forces in northwestern Syria.

The United States has backed the SDF and other Kurdish forces in the fight against the Islamic State, also known as ISIS, in northeastern Syria.

Turkey mistrusts the SDF and considers Kurdish nationalism a threat to its internal security.

The two sides had their first major fight in 2018, when Turkish forces invaded the Syrian territory of Afrin to root out the SDF. Turkey and pro-Turkey militias are accused of using kidnapping and population transfers to displace local Kurds.

A car bomb in a crowded market killed 20 civilians in Afrin last month. Neither side took responsibility.

The Trump administration attempted to keep the peace last year by deploying U.S. troops along the Syrian-Turkish border but suddenly withdrew the peacekeeping force in October, allowing Turkey to invade.

The SDF turned to Assad for protection, but tensions have risen between the two sides, with Russia and the Syrian central government blocking UN aid to the autonomous northeast.

Ending the Turkish-Kurdish conflict has become a priority for some members of Congress.

A congressional religious freedom report published last month called for the Trump administration to back the SDF-affiliated administration and pressure Turkey to withdraw from Syria.

The Kurdish-led administration’s “hard-fought ability to foster an environment of religious and other freedoms remained at serious risk at the end of 2019, due to the partial withdrawal of U.S. forces in October and the subsequent incursion of Turkish forces,” the report states.