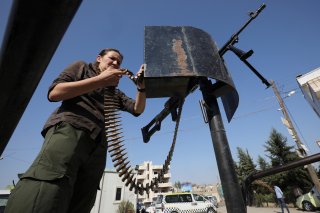 A religious freedom watchdog appointed by Congress suggested on Tuesday that the United States should provide a “potential sanctions exemption” to the Kurdish-led autonomous entity in Northeast Syria.

The U.S. government has imposed harsh economic sanctions aimed at punishing Syrian ruler Bashar al-Assad for human rights abuses. But critics have accused the sanctions of affecting areas outside of Assad’s control, including the Autonomous Administration of Northeast Syria (AANES) controlled by U.S.-backed, Kurdish-led forces.

The criticism gained steam on Tuesday, when the U.S. Commission on International Religious Freedom (USCIRF) released its annual report on religious freedom around the world.

The report recommends “examining” targeted sanctions relief as part of a program to “[e]xpand U.S. engagement with and assistance to the AANES.”

This appears to be the first time a U.S. government body has acknowledged a problem with the sanctions on Syria, which are backed by even harsh congressional critics of other sanctions campaigns.

The report praised the AANES as “a crucial center of positive religious freedom conditions in Syria” and “the area that has shown the most potential for expanded religious freedom over the last two years,” which was put “at serious risk” during a Turkish invasion of Syria in October 2019.

Turkish forces and Turkish-backed militias streamed across the border after President Donald Trump gave Turkey a green light to attack the AANES, which had been under U.S. protection.

The latest USCIRF report asked the Trump administration to “[e]xert significant pressure on Turkey to provide a timeline for its withdrawal from Syria” and prevent further Turkish attacks or human rights abuses, in addition to considering sanctions relief.

It also asked Congress to pass legislation threatening Turkish officials with sanctions for persecuting U.S. citizens and “press” the Trump administration “determine” whether Saudi officials could be subject to sanctions under U.S. human rights law.

Congress created the USCIRF as part of the International Religious Freedom Act of 1998, which requires the U.S. government to monitor religious persecution around the world. Presidents are mandated to take actions ranging from diplomatic protests to economic sanctions against “Countries of Special Concern.”

But the State Department can issue waivers shielding Countries of Special Concern from penalties if it is in the “national interest” of the United States.