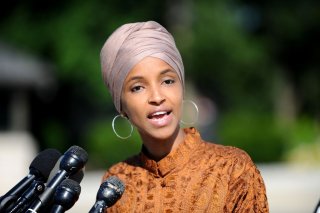 Two former Obama administration officials defended the use of economic sanctions even as they slammed the Trump administration’s pressure campaign against Iran last week.

A growing coalition on the left is blaming the Trump administration’s self-described policy of “super maximum economic pressure” for worsening the coronavirus pandemic ravaging Iran. But some opponents of the pressure campaign believe America needs to kick its addiction to sanctions overall, while others say that sanctions are a valuable tool of diplomacy being misused by the Trump administration.

Their debate could shape the next Democratic administration’s approach to foreign policy.

Progressives had been souring on sanctions even before the coronavirus pandemic began. Rep. Ilhan Omar (D–Minn.) had proposed a bill in February that would require Congress’s approval before the President could impose or renew economic sanctions.

“Sanctions is not a strategy,” said Kate Kizer, policy director at Win Without War, at a February 12 event rolling out Omar’s foreign policy proposals. She called sanctions a “reflexive tool being used when we want to change a state’s behavior because we’ve divested from the other tools of statecraft.”

Trita Parsi, executive vice president at the Quincy Institute, also spoke at the event. He later told the National Interest that progressives increasingly see sanctions as “not an alternative to war, but an alternative form of war.”

The coronavirus pandemic has now brought progressive and centrist Democrats together in calling for temporary economic relief to Iran. Some of the voices against pressuring Iran have made it clear that they do not oppose sanctions on principle, however.

Rep. Tom Malinowski (D–N.J.) told the audience at a National Iranian American Council event on Thursday that the United States has “both a moral obligation and a strategic opportunity to ease up on the sanctions that have been imposed” on Iran.

But Malinowski, who served as Assistant Secretary of State for Democracy, Human Rights, and Labor from 2014 to 2017, also emphasized that he is a “strong and passionate supporter” of U.S. sanctions against the “genocidal” Syrian government.

The United States currently imposes broad economic sanctions on North Korea, Iran, Syria, Sudan, Venezuela and Cuba. The U.S. government had also enforced a near-total United Nations embargo on Iraq from 1991 until the U.S. invasion in 2003.

Richard Nephew, who served as Principal Deputy Coordinator for Sanctions Policy at the Department of State from 2013 to 2015, made a similar argument at a CATO Institute event on April 20.

Nephew argued that the current sanctions regime on Iran “ultimately will make it harder to get countries to join with us when we pursue sanctions campaigns in places where they are seriously needed, where they will be a compliment to diplomacy as part of a broader strategic attempt to address issues that exist.”

“That would be both a problem in terms of how U.S. administrations can deal with future international issues, but potentially a very dangerous one if that meant that our options would be far more limited in future conflict scenarios,” he claimed.

Nephew, the lead sanctions expert on the Obama administration’s negotiating team with Iran, claimed that U.S. sanctions helped bring Iran to the negotiating table in 2015. But he conceded that sanctions have been misused even before the Trump era.

“The problem with sanctions over the past twenty or thirty years—or we could make an argument, much longer—has been that we have confused tool with strategy and strategy with tool,” he said. “What we’re doing in many cases is simply applying sanctions and hoping that the outcome after that will be something that we view as positive.”