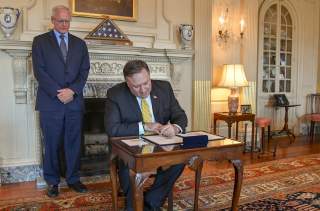 Amb. James Jeffrey, the highest-ranking U.S. official on Syria, will be traveling to Brussels next week to discuss opening a new front of economic pressure against Iranian influence in Syria.

Iran hawks in the Trump administration have seen their fortunes rise, fall, and rise again during an explosive series of U.S.-Iranian clashes in the first week of January. Even President Donald Trump has backed off from a direct military confrontation against Iran. But now his State Department is using the war in Syria to pursue a quieter campaign of “maximum pressure” against Iran ahead of the 2020 presidential election.

Trump has threatened to attack Iran several times as Iran has responded to economic sanctions with military force.

Jeffrey told reporters at the State Department on Thursday that he will discuss Caesar Syria Civilian Protection Act sanctions “and other economic issues related to keeping pressure on the Assad regime” with his European counterparts.

Syrian president Bashar al-Assad is one of Iran’s closest allies in the Arab world. His regime almost fell to a revolution in 2011 but managed to cling onto power through a brutal civil war with heavy backing from Iranian and Russian forces.

The Caesar Syria Civilian Protection Act, which was passed as part of the 2020 military budget, puts human-rights-related sanctions on several sectors of the Syrian economy under Assad’s control, as well as governments that aid Syrian reconstruction and the Syrian military.

Russia used its veto power at the United Nations Security Council in early January to end authorizations for international aid to enter Syria through two U.S.-controlled border crossings in an apparent bid to cement Assad’s power. Jeffrey cited this Russian veto as a reason why “we need to put a lot of work into” pressuring Assad.

Trump administration officials prefer sanctions because they are “politically safe and quite damaging to Iran,” said Faysal Itani, deputy director at the Center for Global Policy, who has repeatedly briefed the U.S. government. “There are of course limits to what ‘maximum pressure’ can accomplish and my guess is that the team understands that an offensive war on Iran and its regional allies would be unpopular domestically and with the president.”

Trump had previously approved a direct military confrontation against Iranian-backed forces in Iraq, which culminated in assassinating Iran’s spymaster Maj. Gen. Qassim Suleimani on January 3. The killing of Suleimani provoked an Iranian missile attack on U.S. forces in Iraq on January 7 that injured more than ten U.S. troops—and pushed Trump away from further escalation.

Secretary of State Mike Pompeo has played a lead role in pushing for a military confrontation against Iran. He reportedly made it his personal mission to kill Suleimani, and his State Department is inching towards an endorsement of regime change.

Pompeo has also assembled a team of hawks focused on countering Iranian influence throughout the region. When he became Secretary of State in April 2018, there was no Special Envoy for Syria or Assistant Secretary of State for Near Eastern Affairs. Pompeo filled both positions as he ramped up “maximum pressure” against Iran, and created new offices for hawkish hires.

The Trump administration had inherited Amb. Michael Ratney, a career State Department official who had worked on Israeli-Palestinian issues, as Special Envoy for Syria in 2017. Administration officials attacked Ratney behind his back as a “defeatist” who “thinks Syria is lost” and is “[n]ot friendly to Israel," the Office of the Inspector General discovered while investigating other issues in the State Department.

Ratney was asked to leave the Bureau of Near Eastern Affairs in December 2017. His office was vacant until Lt. Col. Joel Rayburn, part of a group of retired military officers “intent on containing Iran’s power in the Middle East,” moved into the State Department in July 2018.

Jeffrey’s office, “Special Representative for Syria Engagement,” was created when Pompeo hired him. Brian Hook, an official who was investigated over Ratney’s firing, moved into the newly-opened office of the “Special Envoy for Iran” in September 2018.

Pompeo’s newly-minted Middle East team feels that the Obama administration had “emboldened Iran to get away with far too much in [Iraq] and Syria especially,” according to Itani.

Rayburn pushed the Kurdish-led counter-ISIS forces in northern Syria to work with anti-Assad rebels in mid-2019, while Jeffrey’s team explored spinning off a separate Arab-led counter-Iran force in southern Syria. Their plans apparently failed in October 2019, when Turkey invaded Syria with U.S. approval, and the Kurdish leadership turned to Assad for help.

“If you talk to executive branch officials, they will tell you that U.S. objectives in Syria are the same as they were one year ago,” including the removal of Iranian forces from the country, Washington Institute fellow Dana Stroul said at a Thursday panel discussion, even though “less U.S. forces and influence provides space for Iran.”

“At this point, I don’t see the U.S. having an honest conversation within the administration about what can be accomplished,” she added.

But the State Department has not given up on trying to push Iranian forces off of Syrian soil. It hinted at a more muscular policy even before Suleimani was assassinated.

“It’s important to recognize that the strikes were conducted not only in Iraq but also in Syria,” a senior State Department official told reporters during an anonymous December 30 conference call.

“This shows that we can respond not just in Iraq, but we can respond anywhere that we think it makes sense to us,” a second senior official added. “It’s been long-standing U.S. policy, reiterated by the President to Congress, Mike Pompeo, and the rest of us many times publicly, that all Iranian-commanded forces—which would include, in our view, [Kata’ib Hezbollah]—leave Syria.”