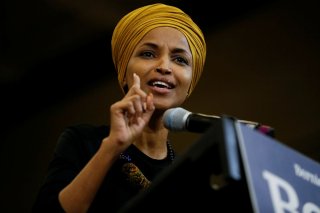 Rep. Ilhan Omar (D-Minn.) signed a letter pressing Turkey on the fate of “journalists, activists, and other political prisoners” in light of the coronavirus pandemic.

The letter, sent by Rep. David Trone (D-Md.) on Monday, asks Secretary of State Mike Pompeo to “insist” that Turkish authorities include political prisoners in their plans to empty prisons in order to stop the spread of the novel coronavirus. Omar’s decision to sign the letter comes after the progressive firebrand was criticized for shielding Turkey from human rights pressure in October.

“Turkey’s crackdowns on journalists and political opposition are fundamentally problematic,” the letter states. “To then hold these detainees while other prisoners are released during the pandemic calls into question the true motivation behind these charges.”

Omar had met with a delegation from the HDP, the largest Kurdish-led political party in Turkey, in March. HDP leaders Selahattin Demirtaş and Figen Yüksekdağ have been imprisoned by Turkish authorities on terrorism-related charges since 2016.

“[Omar] was very genuine and concerned about everything…especially the need for a global progressive movement,” Hişyar Özsoy, the HDP member of parliament responsible for foreign relations, told the National Interest in a text message. “[W]e will stay in contact.”

Omar's office had met with the HDP at least one other time between April and September 2019 “to discuss democratic backsliding, imprisonment of HDP elected officials and authoritarianism in Turkey,” according to records obtained under the Foreign Agents Registration Act.

The progressive lawmaker previously made headlines for her stances during the Turkish invasion of Syria in October.

She voted against sanctions on the Turkish military, and abstained from a vote to recognize the Armenian Genocide, a violent campaign against Armenian and Assyrian civilians by Ottoman Turkish forces during World War I.

Omar cited her longstanding opposition to economic sanctions and wrote that “accountability and recognition of genocide should not be used as a cudgel in a political fight,” calling for recognition of America’s own historical crimes.

Omar’s erstwhile allies in the progressive movement blasted her votes as a betrayal, while her long-time opponents on the right took the opportunity to accuse her of links to Erdoğan.

Omar has since pressed the Turkish government over human rights on multiple occasions.

She wrote a December 2019 letter to senior State Department official Amb. James Jeffrey, demanding an investigation into Turkey’s alleged use of chemical weapons during its invasion of Syria.

Jeffrey had delayed a State Department statement condemning the assassination of Syrian Kurdish politician Hevrin Xelef by Turkish-backed militias during the October invasion, and denied that Turkey was engaged in “large-scale ethnic cleansing” against the Syrian Kurds during a heated session of the House Foreign Affairs Committee.

Omar also joined 72 other Democrats and four Republicans on a March letter calling for $100 million in aid to Armenia. The letter also called for an end to military aid to Azerbaijan, an enemy of Armenia and close ally of Turkey.

This article initially stated “Omar had met with the HDP at least one other time between April and September 2019.” It is has been updated to correctly reflect the Foreign Agents Registration Act records.