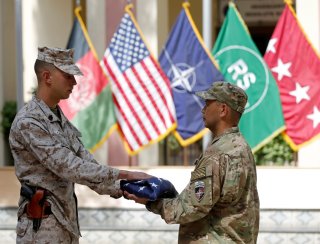 Editor's note: In August, The National Interest organized a symposium on Afghanistan one year after the U.S. withdrawal and the Taliban takeover of Kabul. We asked a variety of experts the following question: How should the Biden administration approach Afghanistan and the Taliban government? What lessons—both from the past year and the two-decade U.S. effort in Afghanistan—might help inform U.S. policy and the issues it should prioritize? The following article is one of their responses:

The best thing the Biden administration can do in its approach to Afghanistan, and what passes for a Taliban government, is to do as little as possible and avoid re-engaging in Afghan affairs. It is all too tempting to try to deal with the humanitarian crisis in the country, engage in some form of counterterrorism activity, try to influence the Taliban's efforts to shape a new government, or help the many Afghans who supported U.S. efforts in Afghanistan and could not leave the country during the final evacuation.

It is all too true that some 23 million Afghans face acute food insecurity, and over six million remain displaced from twenty years of conflict. The Food and Agriculture Organization of the United Nations (FAO) issued a report, however, that shows that hunger is a critical issue in some fifty-six countries and territories and Afghanistan is only one of them. The same report notes that even conservative estimates made for 2020—in a world where things have since grown far worse in 2021 and in the first half of 2022—indicated that some 720 to 811 million people face serious problems with hunger.

Throwing money at a country whose economy was a near kleptocracy dependent on foreign aid and the export of opiates before the defeat and collapse of its central government, and that now has no real government or economic structure, scarcely seems to be the best use of U.S. aid—even if such aid is totally conditional on going to the right targets. There is a strong case for strategic triage in allocating aid resources where such aid might actually produce lasting help to bring development and stability.

The United States has already thrown twenty years' worth of civil aid at Afghanistan, which only resulted in steadily growing percentages of poverty and islands of urban development that only existed because of the ongoing flow of massive amounts of foreign aid to the former Afghan government to fund over 70 percent of its operations. The United States has many other foreign policy priorities, and relying on the limited and conditional support of aid efforts to Afghanistan by other allied countries and international organizations allows the United States to focus limited aid resources on cases with both foreign policy and humanitarian benefits.

As for the threat Afghanistan poses to U.S. security, the United States has equal reason to apply strategic triage to counterterrorism resources or use its strategic influence. There is some risk that the power struggles within the Taliban—and between the Taliban and movements like the Islamic State-Khorasan and Al Qaeda—will create new sources of terrorism outside Afghanistan. There also is, however, good reason to believe that this risk is limited, and there is equal reason to believe that any internal power struggles for control of Afghanistan are largely beyond U.S. influence and control.

An unstable Afghanistan may well not produce a major terrorist threat outside the region. Even if it does, such a threat seems likely to force Russia, China, Iran, and Pakistan to deal with the problem. If anything, having the United States stay out of a situation mired in years of internal instability and power struggles may actually minimize the risk that any given movement will focus on the United States. And, when it comes to strategic triage, it is already all too clear that the world has many countries closer to the United States where some form of international terrorism might take hold.

Enough is enough! There may be a case for limited and quiet efforts to help those Afghans who directly supported U.S. forces to leave the country. There may be a case for the very limited conditional release of funds when it is certain that they will actually aid the Afghan people. The fact remains, however, that virtually everywhere else in the world is a higher strategic priority for the United States!

Anthony H. Cordesman is the Emeritus Chair in Strategy at the Center for Strategic and International Studies (CSIS). He has previously served in the Office of the Secretary of Defense, the National Security Council, the State Department, and the Department of Energy.