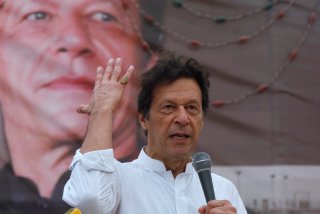 Former Pakistani prime minister Imran Khan was shot in the foot at a rally in the eastern city of Wazirabad on Thursday, BBC News reported.

The seventy-year-old Khan, a former Pakistan cricket captain, was leading a protest march on the capital city of Islamabad to demand snap elections after he was ousted in April. Video footage from the incident showed Khan and his supporters riding on top of a shipping container before the burst of gunfire. Khan is then seen ducking as individuals around him try to protect him.

A senior aide told Agence France-Presse that it was “an attempt to kill him.” Meanwhile, members of Khan’s Pakistan Tehreek-e-Insaf (PTI) party said that one person was killed and another four people were hurt in the shooting. CNN reported that Khan, considered to be in stable condition, was taken from the rally site to receive treatment in Lahore.

“Please pray for us, for Imran Khan, pray for our fellow workers who are severely injured and pray for our party member who has died and is martyred,” Faisal Javed, a senior PTI politician and close Khan ally, said in a video statement.

Prime Minister Shehbaz Sharif, who came to power after Khan lost a parliamentary vote of no confidence in April, quickly condemned the shooting.

“I condemn the incident of firing on PTI Chairman Imran Khan in the strongest words,” Sharif wrote on Twitter.

“Violence should have no place in our country’s politics,” he continued, adding that he asked for an “immediate report on the incident.”

Police confirmed that they detained a man suspected of firing the shots. He was arrested with a 9mm pistol and two empty magazines. In a video confession released by police, the man says: “[Khan] was misguiding the people. I wanted to kill him. I tried to kill him.”

It was unclear under what conditions the interview was carried out.

Last month, Pakistan’s election commission disqualified Khan from holding public office. Khan had been accused of incorrectly declaring details of gifts—including Rolex watches, a ring, and a pair of cufflinks—from foreign dignitaries and profits from their alleged sales.

Khan described the case as being politically motivated.