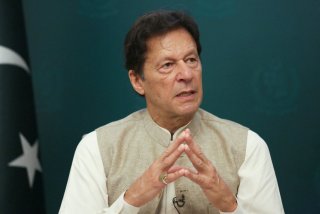 On Tuesday, Pakistan’s Electoral Commission ruled that former Prime Minister Imran Khan, who was dramatically removed from power earlier in the year, had accepted millions of dollars in illegal political donations from outside Pakistan by using a network of concealed bank accounts.

The commission, which has investigated the case against Khan’s Pakistan Tehreek-i-Insaf (PTI) party since 2014, indicated in its ruling that Khan and other members of the PTI had opened sixteen separate hidden accounts and funneled money from Canada, Australia, the United Arab Emirates, and the Cayman Islands into Khan’s campaign funds. The commission also observed that the information submitted by the PTI to comply with its requests had been “grossly inaccurate.”

Incumbent prime minister Shehbaz Sharif, the leader of the conservative Pakistan Muslim League-Nawaz (PML-N) party, lauded the ruling on Twitter. Sharif asserted that it had shown “yet again that he [Khan] is a certified liar” and that Pakistani voters “should ponder over the implications of his politics funded by foreigners.”

The PTI has contested the commission’s ruling, and a spokesman for the party claimed that its foreign donations had originated from overseas Pakistanis, which are not illegal, rather than foreigners—which are. Khan has not personally commented on the ruling.

A former cricket star, Khan gained the prime ministership in 2018 after a landslide victory for the PTI, relegating the PML-N and its historic rival, the Pakistan People’s Party (PPP), to opposition status. However, following a severe economic crisis, missteps in Pakistan’s foreign policy, and growing tensions with the country’s notoriously coup-prone military, several PTI lawmakers turned against Khan, leading to a successful no-confidence vote in April. In the months since his dismissal from office, Khan has held a series of rallies across Pakistan, claiming that a U.S.-backed “foreign conspiracy deposed him” and vowing to return to the prime ministership in the next election.

It is not immediately clear what impact the electoral commission’s ruling will have. As a result of the inquiry, the PTI has been sent an order requiring it to explain the origin of the funds; it can either do so or challenge the order in court, which PTI spokesmen have suggested the party will do. At the same time, the commission could attempt to confiscate the funds, or the government could try to ban the PTI from participating in politics. However, this action would be unprecedented in Pakistan’s history and could be perceived as anti-democratic.